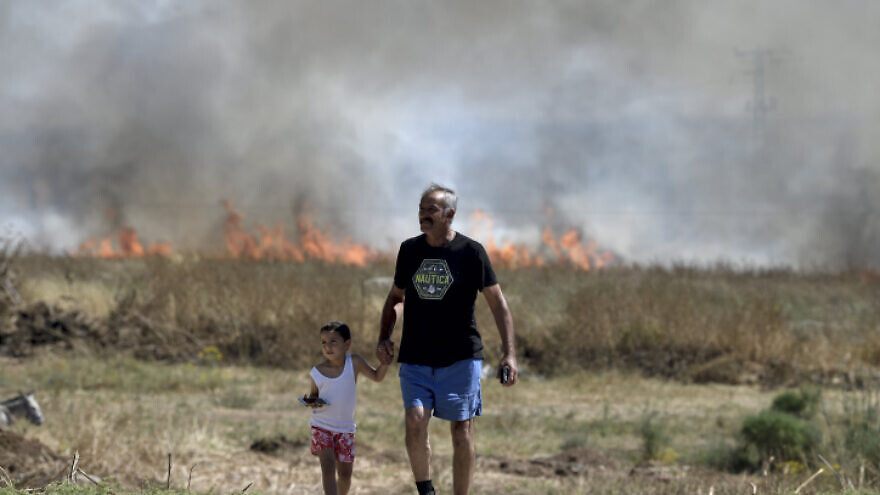 An Israeli man and child near a fire caused by shrapnel from a rocket fired from the Gaza Strip, wounding four, in Lakhish Regional Council on May 13, 2021. Photo by Gili Yaari /Flash90.
Spread the word.
Help JNS grow!
Share now:

(July 22, 2021 / JNS) Israeli forces on Wednesday detained an Arab suspect reportedly caught in the act of setting fire to a wooded area in Gush Etzion.

A local resident witnessed the suspect lighting the fire in a forest in the Nahal Heletz Valley northeast of Sderot and notified the Gush Etzion Regional Council’s Land Authority, the council said in a statement. The latter summoned the military and firefighters to the scene, the latter of whom extinguished the flames before any major damage was done to the trees.

Before the IDF arrived on the scene the suspect fled in his vehicle, leading to a 90-minute car chase that ended in his apprehension. Security officials found a gasoline canister, a combat knife, pepper spray and other equipment in his car.

“Today we received further proof that our war over land is also a war over lives,” said Gush Etzion Regional Council Head Shlomo Ne’eman in the statement. “Whoever sets fires to this land probably doesn’t believe that it belongs to him. The Gush Land Authority caught this terrorist red-handed with a ‘hot lighter.'”

The incident was the second suspected arson attack in Gush Etzion in two days. The first took place on Tuesday near the community of Tekoa, where the blaze scorched several acres of vegetation. No injuries were reported in either case.

Israeli security officials told JNS that there have been more than 20 attempted arson attacks perpetrated by Arabs in the area over the past few months.