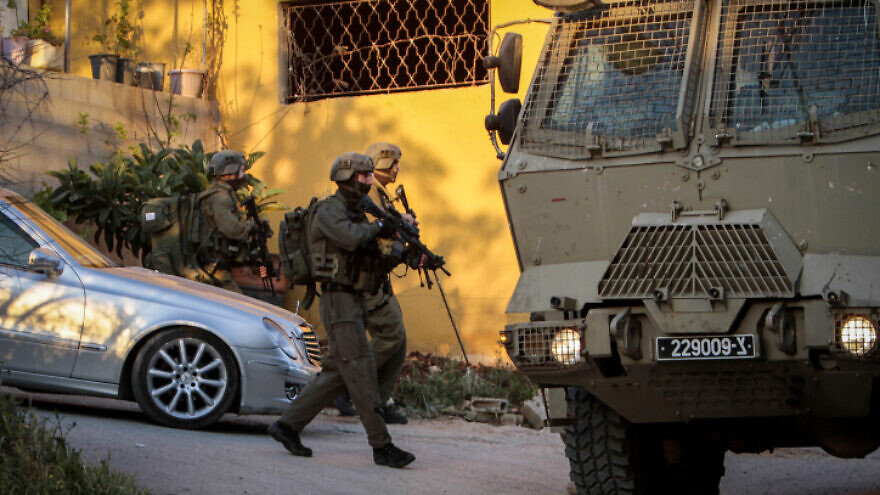 Israeli soldiers conduct a raid on the house of Hamas activist Musab Akef in the village of Salem, east of Nablus/Shechem in Judea and Samaria, April 20, 2022. Photo by Nasser Ishtayeh/Flash90.
Spread the word.
Help JNS grow!
Share now:

(April 24, 2022 / JNS) Israeli security forces on Friday arrested the uncle of Ra’ad Hazem, the terrorist who murdered three Israeli civilians in Tel Aviv on April 7, according to the Israeli military.

The uncle, identified by Ynet as Ahmed al-Sa’adi, a resident of the Jenin refugee camp, was arrested in Arabunna, near Jenin. He is suspected of assisting the terrorist.

Sa’adi was one of 12 Palestinian security suspects arrested over the weekend in counter-terror raids throughout Judea and Samaria, including in Qalandia, Al-Bira, Hebron and Jenin.

Separately on Friday, four minors, residents of Umm el-Fahm, were arrested following a violent disturbance in the city, Ynet reported.

The rioters, who carried Palestinian Authority flags, and chanted slogans about their willingness to sacrifice their lives for Al Aqsa mosque in Jerusalem’s Old City, according to the report.

When police arrived on the scene, the rioters burned tires, threw rocks and set off fireworks, causing police to respond with riot dispersal methods, according to Ynet. Police said more arrests could follow.

Umm el-Fahm Mayor Samir Sobhi Mahamed confronted the rioters, attempting to banish them from the scene, according to the report.