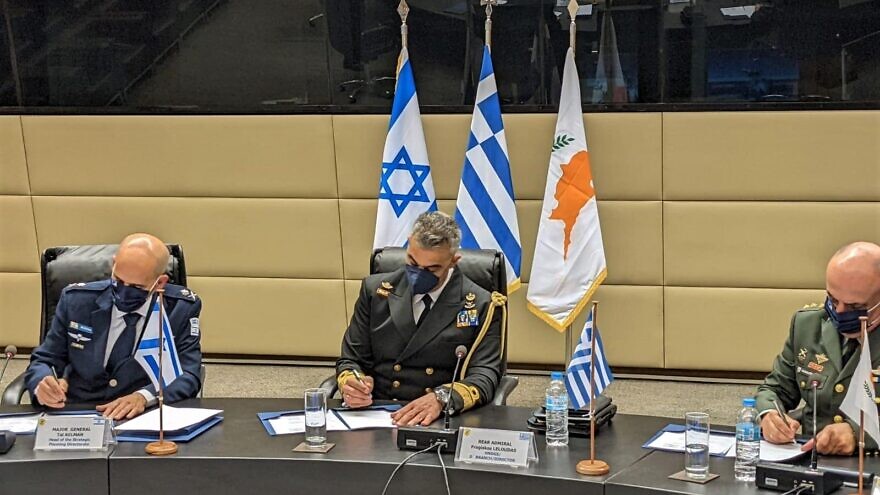 (February 16, 2022 / JNS) A senior Israel Defense Forces commander met with counterparts from Greece and Cyprus in an important trilateral meeting, the IDF announced on Wednesday.

Maj. Gen. Tal Kelman, head of the Strategic Planning and Cooperation Directorate, participated in the meeting in Athens, Greece, which included “a series of strategic and operational briefings as well as a professional panel to discuss opportunities for expanding military cooperation to other sectors,” it said.

The officers acknowledged the strengthening relationship between the three militaries, added the IDF.

“It was noted that the last few months had an unprecedented volume of joint activities in the Middle East. Following the meeting, Maj. Gen. Kelman met with the chief of the Hellenic National Defense General Staff, Gen. Konstantinos Floros. The two discussed the joint plan of action for 2022, which was signed by the three countries,” stated the IDF. “An additional plan for military cooperation between Israel and Greece was signed by the deputy commander of the International Cooperation Division, Col. Gil Dolov.”

“The strategic security triangle formed between Israel, Greece and Cyprus is significant for the region,” said Kelman. “The cooperation between the three nations strengthens all of our forces. This trilateral alliance is an asset, and we in the IDF are committed to continuing to deepen military ties both in joint training exercises and the coordination of operational activities.”