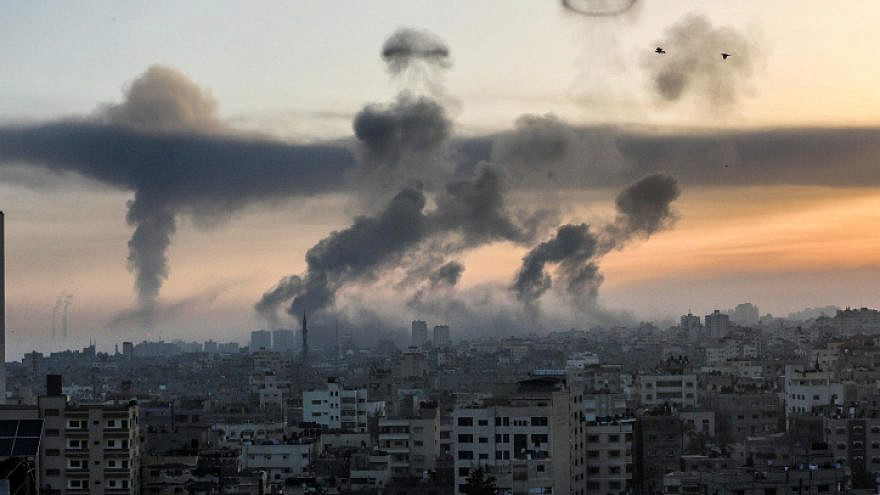 (May 12, 2021 / JNS) The Israeli military announced on Wednesday that a number of top Hamas commanders had been killed in a “complex” operation in the Gaza Strip.

The commanders, who the Israeli military said was “close to” the terror group’s military chief, Muhammad Deif, were killed simultaneously in Gaza City and Khan Yunis in what the army said in a statement was a “first of its kind” joint operation of the Israel Defense Forces and the Shin Bet.

Terrorist groups in Gaza have launched hundreds of rockets at central and southern Israel since Monday, killing several Israelis and wounding dozens more. In response to the ongoing attacks, which have been accompanied by violent rioting inside Israel, the IDF has struck hundreds of targets in the Gaza Strip.

According to the Shin Bet, the Hamas commanders killed included:

• Bassam Issa, commander of the Gaza City Brigade since 2017. According to the ISA, Issa was a senior member of Hamas’s weapons production network and had been involved in multiple attacks against Israel. His death will “significantly impact” the brigade’s ability to function, as well as the operations of Hamas’s military wing, according to the ISA.

• Jama’a Tahla, Hamas’s cyber chief and the head of the division in charge of improving the terror group’s missile arsenal. Tahla was in charge of Hamas’s research and development, and was the “right-hand man” of Hamas’s chief military commander, Muhammad Deif, according to the ISA. He was also a central leader of Hamas’s force build-up program, to which his elimination dealt a “significant blow.”

• Jamal Zabade, head of the development and projects division at Hamas’s manufacturing headquarters. According to the ISA, Zabade served as the central catalyst in Hamas’s rocket production program. A Ph.D. in mechanical engineering who specialized in aerodynamics, Zabade was qualified in a range of technological fields and played a central role in Hamas’s weapons manufacturing headquarters. He was a senior member of Hamas’s research and development personnel, and dealt with advancing central projects in Hamas’s force build-up.

• Hazem Khatib, head of the engineering department in Hamas’s weapons manufacturing division, of which he also acted as the deputy head.

• Walid Samli, head of the industrial equipment section in the manufacturing division.

Hamas launched a heavy barrage at Ashdod shortly after the announcement of the assassinations, triggering air-raid sirens in several other towns and communities. The terror organization also warned that it would begin firing at “new targets” at 6 p.m.

Israeli Defense Minister Benny Gantz on Wednesday rejected criticism of the IDF’s ongoing operation, dubbed “Guardian of the Walls,” saying that Israel would not be lectured to regarding its right to defend itself.

“In Gaza: Collapsing towers, destroyed tunnels and assassinated commanders,” he said in a statement, adding that operation would continue until Israel was satisfied “complete quiet” had been restored “for the long term.”

“There is no end date, and we will not accept moralistic sermons from any organization regarding our right to protect the citizens of Israel,” he said.