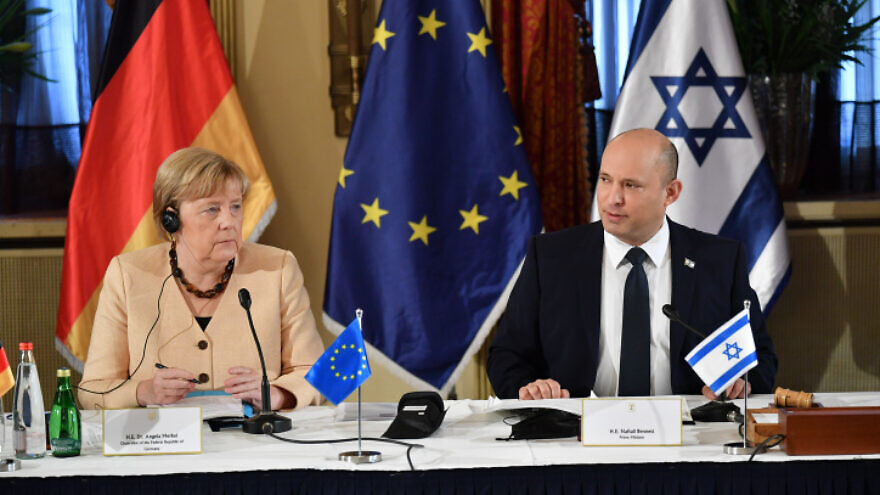 (October 10, 2021 / JNS) At a special Cabinet meeting at Jerusalem’s King David Hotel on Sunday, Israeli Prime Minister Naftali Bennett greeted visiting German Chancellor Angela Merkel by stating that the alliance between their two countries had “turned into a friendship.”

Merkel, who is heading Germany’s caretaker government until its next coalition is formed, landed in Israel on Saturday night for her last official visit as chancellor—a role she has held for the past 16 years.

“The [Israeli] government is very diverse in its opinions; it may be the most diverse in the world,” Bennett said in his opening remarks, reported live on Channel 12 news.

“Nevertheless, there is basic agreement among everyone sitting here on a few essential issues,” he added. “One is the importance that we all see in [Israel’s] relations with Germany, in the need to preserve and improve them. [And we all share] a great appreciation for the special role you have played in fortifying this relationship, which sits on a major historical wound.”

Referring to his recent address to the United Nations General Assembly, Bennett reiterated that “Israel is, indeed, a lighthouse in a stormy sea. And whoever remains neutral in the conflict between Israel and states such as Iran, and organizations like Hamas and Hezbollah, has lost his moral compass. You, Chancellor, have been serving for years as the moral compass of the entire continent of Europe and constitute an uncompromising line of support for Israel.”

Responding to Bennett’s comments, Merkel said, “Compared to the coalition that makes up your government, forming a coalition in Germany seems like a very simple matter,” adding, “It is a mistake to base relations between Israel and Germany only on the memory of the Holocaust.”

Merkel’s trip to the country, which is slated to last through Monday, comes after a previous postponement in August, due to Germany’s evacuation of troops from Afghanistan.

Her schedule includes a tour of the Yad Vashem-the World Holocaust Remembrance Center, meetings with high-tech entrepreneurs and a dinner with Bennett.