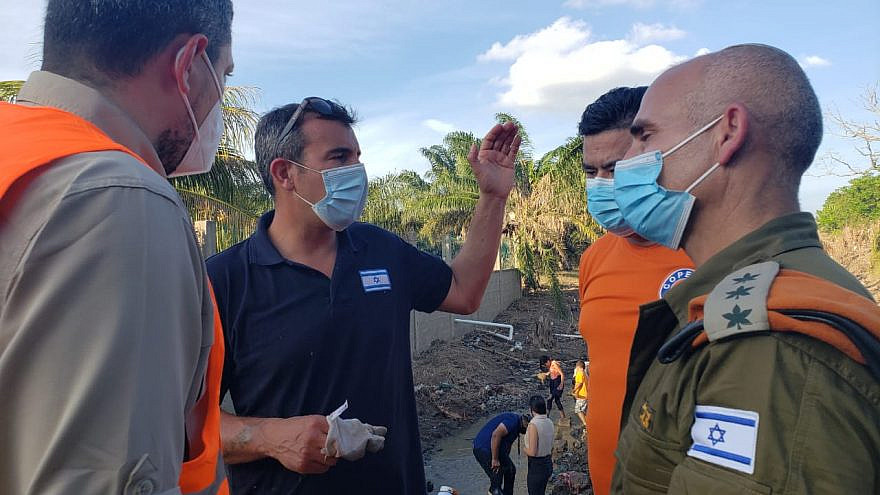 (December 16, 2020 / JNS) Helping a Honduran village hit extremely hard by hurricanes to go from being almost empty to increasingly being refilled with its inhabitants was a powerful experience for members of the Israeli assistance delegation sent there in recent weeks.

Amir Shalom, the Israel Ministry of Defense representative to Mexico and Central America, played a key role in organizing the Israel Defense Forces Home Front Command and Ministry of Foreign Affairs delegation, and shared the experience with JNS.

“The more we were there, the more we saw people going back to the village,” he said. “We felt that we were a real part of the hope of the villagers. They invited us to their homes. We helped them rebuild. That includes taking the mud out of their homes, clearing the main streets and witnessing their incredible dedication.”

“I’m glad to say that our connection with the Honduran Defense Ministry is good and thanks to these friendly relations, we received full support from the country’s president,” reported Shalom. “We received everything that we needed, including helicopter and plane transport.”

The IDF aid delegation conducted a seven-day mission that included a series of operations in the cities of San Pedro Sula and La Lima, which were severely affected. It returned to Israel on Dec. 10.

The two Category 4 hurricanes, Eta and Iota, struck the Central American country in November, leaving behind mudslides and widespread devastation.

The aid delegation came up with a number of ways to provide engineering and medical care. 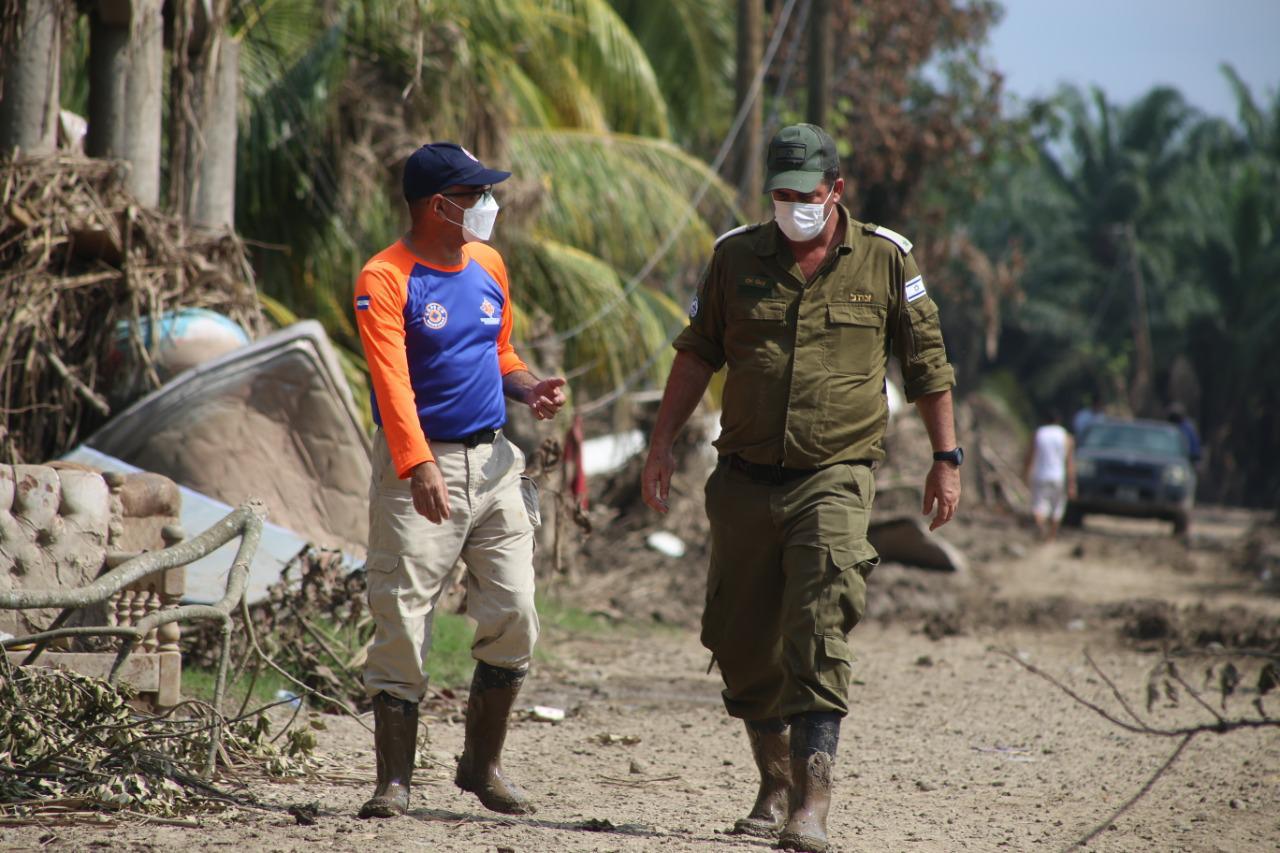 Simultaneously, the members of the aid delegation helped rebuild the village of Cruz de Valencia, which was most severely damaged, through the refurbishment of houses in the village, the installation of solar lighting and the connection of a water system. As a result, hundreds of residents returned from shelters back to their homes. In addition, engineering surveys and damage assessments were conducted for hundreds of residences, said the IDF.

During their mission, the forces operated advanced mapping technology for engineering damage assessment. Senior officials of the Honduran government personally took part in the delegation’s activity.

‘Find ways to return them to their homes’

The delegation was led by the Commander of the National Rescue Unit, Col. (res.) Golan Vach, and consisted of 15 reservists, accompanied by staff from the Israeli embassy in Honduras and supported by experts from Israel.

It reached northeast Honduras—an area severely affected by the two hurricanes—chosen by the delegation as the location where it could provide a maximum level of assistance.

“We had clear objectives, which were defined in Israel. First and foremost, the goal was to help Honduras deal with the aftermath in two of its states,” said Shalom. “We set out to help the state and civilians at the level of the individual. To find ways to return them to their homes.”

With many civilians gathered in shelters, the delegation wanted to get them back home as soon as possible.

A second objective, he said, was to help state officials deal with and mitigate future disasters.

As the delegation worked, experts back in Israel continued to think up solutions and process data, presenting insights based on data analysis to enhance the delegation’s decision-making.

Israeli health and engineering experts held virtual meetings with their Honduran counterparts to look at solutions for draining floodwater and dealing with overflowing damns.

‘Bring back infrastructure, electricity and water’

Speaking to JNS on the final day of the delegation’s mission, Shalom said the digital database system used by the Home Front Command team played a key part, providing a “much brighter picture of the area, and giving decision-makers the ability to know where to prioritize their efforts and allocate resources.”

The village of Cruz de Valencia saw 280 homes—a third of the village’s housing—erased in the natural disaster with families left only with floors.

“We decided to simply get to this village and bring back its infrastructure, electricity and water, and to return villagers to their homes,” said Shalom. Damage surveys revealed the fastest ways of rebuilding roofs while also marking out residences that were no longer safe for habitation.

Delegation members relied on their experiences and expertise in multiple disciplines, including past disaster-relief missions. 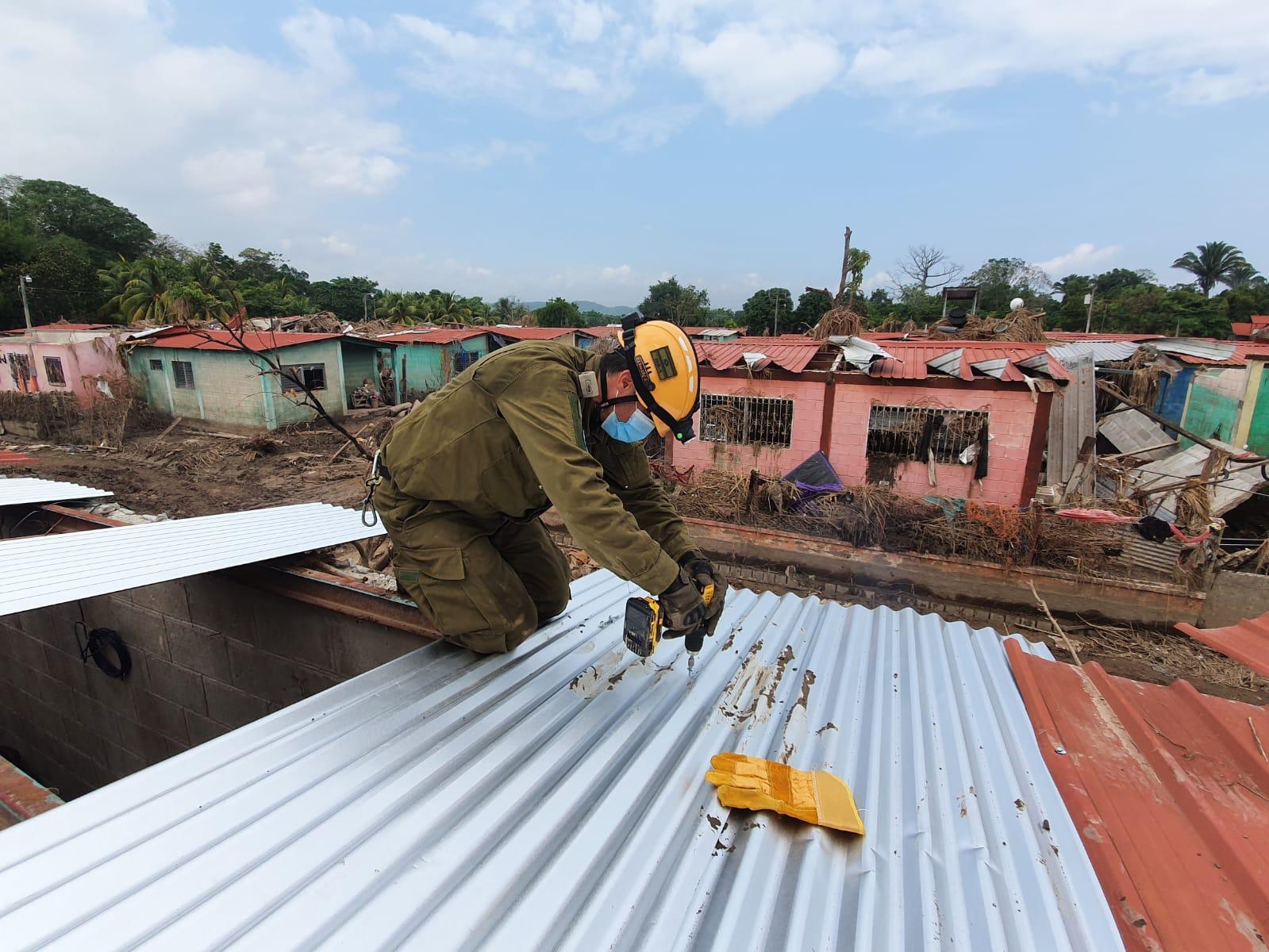 The IDF aid delegation conducted a seven-day mission that included a series of operations in the cities of San Pedro Sula and La Lima, which were severely affected. Credit: IDF Spokesperson’s Unit.

“The Israeli character is about not giving up—about striving to engage under challenges and looking for solutions,” said Shalom. “It was incredible to see all of the personnel working in layers of mud hand in hand with the inhabitants to return the village to what it was.”

The team also passed on recommendations to the villagers on how to quickly rebuild in the event of a future destructive storm.

“We are sure we are leaving an imprint here, a kind of hope for these people. We chose this village because it was hit really hard,” said Shalom, adding that the Commander of the National Rescue Unit, Col. (res.) Golan Vach, decided to place the focus on the most difficult challenge.

“We leave tomorrow, and this is not a miraculous transformation that occurred here,” he acknowledged, “but at least we could influence and give a real supporting push.”

The villages in this part of the world are managed by committees of locals, and the head of the committee, called “Patronato,” gave the delegation a tour of the damage. Shalom said “we got to a corner of the village and she showed us her home, or where it was stood. Nothing was left.”

“We saw a moving sight after we managed to activate a functioning water supply, which equals life. When there is water, more people can come back,” described Shalom. “We did another tour, entering the homes and asking how we can help. We entered one of the homes and saw a mother cooking in her kitchen, pots on the gas, the smell of food was present. We saw that they’re coming back. That things are going back to life. And it’s incredible to see these things,” he said.