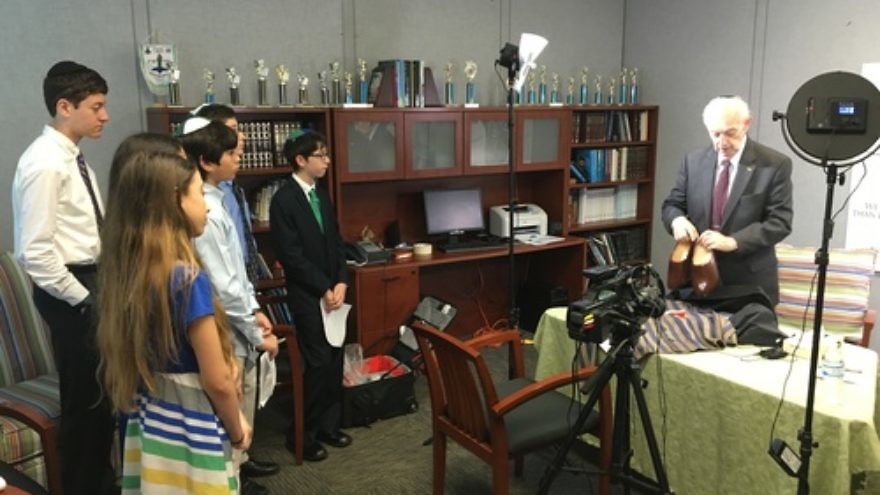 “They’re so sweet and helpful and smart, and they are alwayssmiling,” says Herbst, who won’t reveal her exact age, only saying it’s “over 65.”

Herbst knows that when the students do show up, she and the other residents at the Boca Raton independent living center have something unexpected and fun in store, whether it’s a play, a musical performance, or a lively Bingo game.

That is exactly what the planners of the Jewish Federation of South Palm Beach County’s 100-acre campus had in mind when they designed it back in 1989. The day school and the retirement community both call the campus home.

“Promoting intergenerational Jewish life was and still is a deliberate vision here,” says Matthew C. Levin, the Jewish Federation’s president and CEO. “And it’s not simply living in the same place, but interacting—at holiday time and year-round. Every day, there are natural opportunities to bring the generations together.”

Indeed, the opportunities are abound, with the campus including two U.S. Housing and Urban Development Department (HUD) apartment buildings for low-income seniors and people with disabilities, an adult day care for those with dementia, and the Sinai Residences of Boca Raton continuing care retirement community (CCRC). The Sinai Residences has room for 450 residents.

Providing these seniors with an endless supply of noisy exuberance, flag ceremonies on Israeli Independence Day, and the occasional sloppy kiss is a cadre of youngsters who spend their weekdays on campus. Between the preschoolers at the Levis JCC Zale Early Learning Center and the students at two day schools, the campus currently welcomes a total of 1,500 students daily. A third school, Boca Raton’s Yeshiva High School, is poised to add its 350 youngsters to the Federation campus when construction on its building is completed.

The same dynamic between seniors and kids is at play about 1,500 miles to the north in Dedham, Mass., a stone’s throw from the Boston area’s Jewish hubs of Newton, Brookline, and Sharon.

In Dedham, dozens of residents at NewBridge on the Charles, a CCRC, give of their time and talents to students at The Rashi School, which shares the same campus. Among the seniors partaking in the intergenerational fun are a retired aerospace engineer who spreads his knowledge of integers and fractions, an art lover who helps out in the school’s art room with classes that include her great-grandchildren, and a retired rabbi who leads the shaking of the Four Species on Sukkot. In addition, students studying immigration and the Holocaust find that many residents are living, breathing history textbooks.

The learning and the giving flow both ways, says Lynda Bussgang, who manages intergenerational programming at NewBridge for the facility’s parent company, Hebrew SeniorLife. Tech-savvy youngsters come in to teach the seniors how to use computers, in addition to delivering meals and parading through the halls each year in their Purim costumes.

“Since Rashi arrived [on the campus] in 2010, relating to the seniors has been part of the plan here,” Bussgang says. Intergenerational programs pull together NewBridge’s 600-plus residents with Rashi’s 325 students and hundreds more from off-campus schools they’re involved with.

The push for intergenerational connections is particularly relevant in today’s society, with families tending to be split geographically. Examples of this trend can be found throughout the Jewish world. At Temple Emanuel of Beverly Hills, Calif., for instance, the High Holidays choir brings together singers from ages 12-85 to lead the congregation in prayer.

“It provides young people with older adults who are not their parents or clergy, but who serve as mentors and role models and form a bond,” says Jonathan Aaron, senior rabbi at the Reform congregation. “Now, when they see them around the synagogue they say, ‘I have a friend who’s 50 years older than me.’”

“Kids have so much to learn from people who have experienced life—such as war and survival—including tolerance,” she says. What’s more, meeting Holocaust survivors has what she calls “the opposite effect on kids than people think. They’re not frightening but inspired. They see that when life throws you challenges, it’s all about how you deal with it.”

Allaying fears is instrumental in the development of a child, says Sandy Katz, a veteran educator with a Master of Social Work who serves as vice president at New York City’s Jewish Child Care Association.

“When [children] get to relate with people who seem a little different, they learn to easily accept differences; it breaks down the fear,” says Katz. “And even better, a senior isn’t in a rush to do something else like most parents are. They can take the time to tell a story right and really listen to the child. Child time is more in step with senior time.”

Mira, for one, appreciates that approach to time. An 8th grader at Katz Hillel Day School, her favorite activity is the monthly Bingo game at the Jewish Association of Residential Care’s Living and Learning Center for adults with developmental disabilities.

“It’s such a fun and happy time with the residents….We’re getting to know each other as people and it’s helping me be a more patient person, a lot more patient. After you spend time with them, you get a warm feeling that lasts for two or three days,” she says.

The benefits appear to be just as potent for the seniors involved in intergenerational activities.

“Our residents have so much more to offer than people often give them credit for,” says Hebrew SeniorLife’s CEO, Lou Woolf. “We see them coming back to life again after they move in here.” Woolf’s 87-year-old mother-in-law lives in a long-term care facility and provides tutoring for students at The Rashi School each week.

“It’s the most special thing in her life and gives her incredible satisfaction and purpose,” Woolf says. “What we see is that being with younger people makes them feel younger, reminding them that they still have a lot of living and giving to do.”

Helena Levine, head of school at the Donna Klein Jewish Academy on the Federation campus in Boca Raton, says that for seniors who may have been emotionally wounded by being removed from their home environments, “it heals all that when we bring them together with kids and they see each other for the people they really are.”

The intergenerational bonds also help forge Jewish identity and shape the Jewish future, Levine says, recalling one particularly moving moment when a young brother and sister sang several Yiddish songs for seniors. One Holocaust survivor told the siblings, “Listening to you singing in my mother tongue assures me that there is a future for our people.”

“We Jews have a belief that we have to care for our family, and since all Jews are part of our family, when you go visit someone Jewish, you know it’s not just another elderly person,” says Rabbi Josh Broide, director of the Deborah & Larry D. Silver Center for Jewish Engagement at the South Palm Beach County Federation. “You know it’s your cousin.”