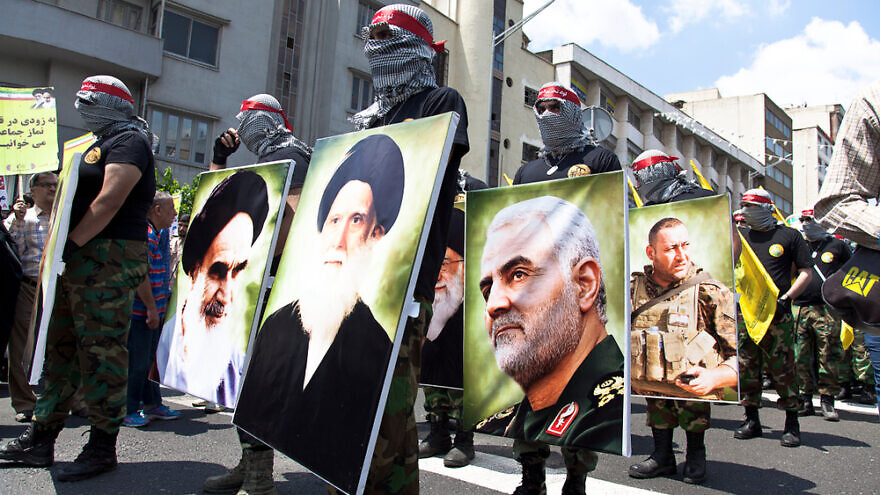 (July 30, 2021 / JNS) Becoming a nuclear-armed state is a central aspect of Iran’s “Shi’ite” revival program, and the Iranian regime believes that developments are moving in line with its vision, an Israeli expert on the Islamic Republic has warned.

Lt. Col. (ret.) Michael Segall, a senior analyst at the Jerusalem Center for Public Affairs, told JNS that it is important for policymakers to understand the mindset of the Iranian regime.

“They believe in the Shi’ite revival. It’s important to grasp the importance they attach to this goal,” Segall told JNS.

Events throughout the region, such as the departure of the United States from Iraq and overall progress in Tehran’s nuclear program, have acted as confirmation for the clerics and the elite military Islamic Revolutionary Guards Corps (IRGC) elements that “meta-historical” trends are going their way, he added.

“As Westerners, we ignore their mindset—the Iranians feel that they have Divine intervention helping them,” explained Segall. “From their point of view, Hamas could manage a war against Israel. Hezbollah is growing militarily stronger. The [Bashar] Assad regime remained in place despite the Syrian civil war. Saddam Hussein [Iran’s archenemy] was removed from power. They feel that something big is enabling them.”

As a result, Iran is becoming bolder, said Segall. “The nuclear program is the anchor that would allow Iran to position itself in the role that it has defined for itself. Becoming a nuclear state would influence all of Iran’s tentacles in the region.”

Examples of stepped-up Iranian self-confidence can be found throughout the Middle East. Segall pointed to the Houthis in Yemen—armed with cruise missiles, GPS-guided bomb boats and drones, and hitting oil refineries in Saudi Arabia on a regular basis—and to the activities of Iran in Syria, which are continuing despite a reported determined Israeli campaign of preventative strikes.

“The Iranians feel that they are succeeding,” said Segall.

The Islamic Republic would like to extend a nuclear umbrella over its regionwide activities and those of its proxies, he said, adding that Tehran has an organized strategy, unlike the West, on how to proceed.

“Iran’s bottom line is that it wants to become a nuclear-armed state or a nuclear breakout state,” said Segall. To that end, the way Iran managed negotiations with world powers leading to the 2015 nuclear deal was part of a “highly organized” push to eventually reach that objective, one way or the other.

Unlike American or Israeli governments, the Iranian regime does not change every number of years, and Tehran takes a very far look at the future, argued Segall.

“It’s not the Iranian president who decides this policy but rather, the permanent Supreme Leader, Ayatollah Khamenei, and the IRGC. The Supreme Leader is growing stronger within the country. The election of Ebrahim Raisi as president is bringing the Supreme Leader’s power to a peak. All of the more pragmatic moderates are being pushed aside. Perhaps [the current Foreign Affairs Minister Mohammed] Zarif will be allowed to continue,” assessed Segall.

Ultimately, the election of the hardline Raisi as president means there is now just a single front within Iran, according to Segall. “The West can’t say that they have pragmatists to speak to, such as [former president Mohammad] Khatami, [outgoing president Hassan] Rouhani or [former president Akbar Hashemi] Rafsanjani. The West will struggle to find someone in Iran it is comfortable doing business with.”

Western policymakers, therefore, face a new dilemma, said Segall. Will they continue to ignore the regime’s repression of ordinary Iranians, as exemplified by the unrest in the southwestern province of Khuzestan, where people “are begging for three liters of water?” And will they reach a new nuclear agreement with Iran that will reward the regime economically? This, in spite of the fact that the Biden administration and the West “wave the flag of human rights as a core tenet?” asked Segall.

It is also possible that attempts to revive the nuclear will fail. Whether or not a new deal is signed, the flaws of the original 2015 deal are fully on display, he said, due to the speed with which Iran was able to return to nuclear activity in recent months.

“Whether or not Iran goes back to the 215 agreement doesn’t matter to it. Within a short time, they have proven their nuclear knowledge, and they can decide to advance their nuclear project whenever they want,” he said. “In the context of the 2015 deal, if it is revived, the Iranians can manufacture a crisis when they wish—claiming, for example, that insufficient numbers of Western businesses are dealing with Iran, or complaining about their inability to export enough oil.”

Such a manufactured crisis could act as Israel’s “get out” clause from the deal.

“The know-how cannot be taken away from the Iranians,” said Segall. “They know what to do, and how to do it. If they’re not stopped, they will get to where they want to go.”

The Biden administration recognizes that Iran is shortening its nuclear breakout time quickly, he added, but ultimately, this recognition has not stopped Iran from making progress, despite reported acts of sabotage against Iranian nuclear sites, often attributed by the Iranian regime to Israel.

Last week, Israel’s public state TV broadcaster Kan 11 reported that Israel delivered a new alert to the United States, according to which the Islamic Republic “is approaching nuclear threshold state” status, meaning that it is a country that gains the operational ability to build nuclear weapons.

“The message was sent through a number of conversations that senior Israelis held, including Foreign Minister Yair Lapid, and Defense Minister Benny Gantz, with their American counterparts,” the report said.

In an interview with the BBC’s Persian service, Gantz said on Tuesday that Israel has capabilities and means to attack Iran’s nuclear program, “which I cannot provide details about, and we are in a high state of readiness to ensure that Iran will not get nuclear weapons. I am sure that the Iranian regime is aware too of some of Israel’s capabilities.”

As Israel sounds the alert, the Iranians are still continuing on in their long-term journey aimed at hegemony.

“The Iranians proved that they could survive [former President Donald] Trump, the biting sanctions and all of the economic prices they had to pay. This achievement can’t be taken away from them,” said Segall.

‘We don’t know where the Iranians stand’

Borrowing a phrase from the late U.S. Defense Secretary Donald Rumsfeld, Segall expressed concern about the “unknown unknowns” of the Iranian nuclear program.

On July 7, the military open-source defense intelligence company Janes and the Center for International Security and Cooperation at Stanford University released an assessment of a nuclear site in Iran that is under construction. Janes described the site as a likely “underground centrifuge assembly facility located southwest of Iran’s existing Uranium Enrichment Complex at Natanz.”

“Each time, a new previously unknown site is exposed. I am mainly concerned that we don’t know where the Iranians stand,” said Segall.

He raised the “big question of the two stop clocks”—one that counts down to the time that the Iranian regime collapses, and the second that counts down until Iran becomes a nuclear-armed state. “It’s not possible to know which watch will count down to zero first,” said Segall. “One can’t make a gamble on this.”

Asked what Israel’s options are in light of these developments, he said that it “is doing and did many things to stop the Iranian nuclear program.”

At the same time, the momentum for forming an anti-Iranian regional alliance between Israel, Saudi Arabia, the United Arab Emirates and Bahrain appears to be decreasing, acknowledged Segall. “The Saudis themselves do not know where things are going. In the end, Israel will continue to do what it does in all sorts of ways.”