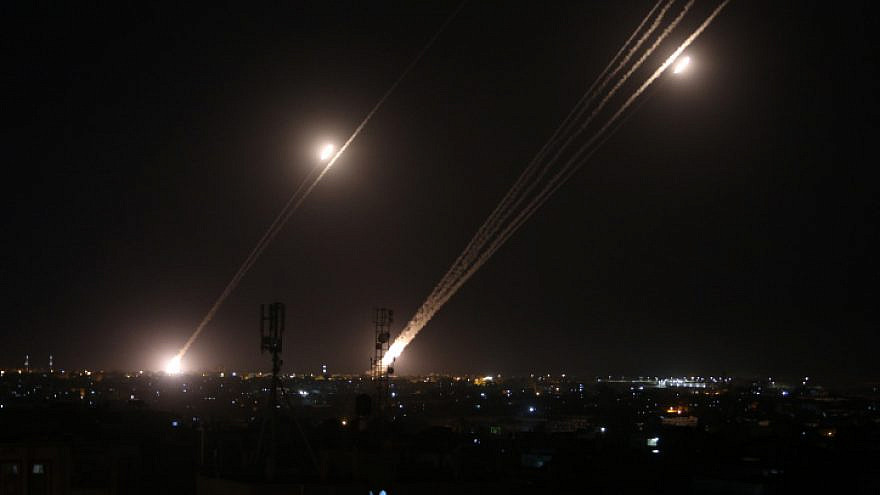 Rockets are launched towards Israel from Rafah, in the southern Gaza Strip, early on May 12, 2021. Photo by Abed Rahim Khatib/Flash90.
Republish this article
817 WORDS
Spread the word.
Help JNS grow!
Share now:

(May 12, 2021 / JNS) The escalating conflict between the Israelis and Palestinians is one of the first major policy tests for the Biden administration.

Despite U.S. President Joe Biden’s hope to shift foreign policy away from the Middle East to deal with threats from China and Russia, it is now being confronted with the difficult reality of the Israeli-Palestinian conflict.

Jonathan Schanzer, senior vice president at the Foundation for Defense of Democracies, told JNS that the Biden administration is in a “decidedly awkward position” right now.

“Amid nuclear negotiations that will soon yield the Islamic Republic a massive windfall, the Biden administration is on the cusp of indirectly providing Hamas with the cash it needs to replenish its rocket supplies,” he said.

He added that “Iran is Hamas’s key patron. This is not lost on Israel. Nor is it lost on the rest of the region.”

Schanzer argued that whatever the Biden administration does next to address the situation will most likely ring hollow.

“This does not mean that the administration should completely forego its efforts to minimize the conflict,” he said. “But it should not expect to be viewed as an impartial authority under the current circumstances.”

The Biden administration has so far backed up Israel’s right to defend itself against as many as 1,300 rockets that have been fired on the Jewish state in recent days. Yet Biden has also attempted to take a different approach to the Middle East than his predecessor, Donald Trump. Biden’s administration has focused heavily on re-entering the 2015 Iran nuclear deal and deprioritizing allies in the region like Israel and the Gulf Arab states, which Trump quickly embraced and with Israeli Prime Minister Benjamin Netanyahu, worked to forge normalization deals, which it did with the United Arab Emirates, Bahrain, Sudan and Morocco in the form of the Abraham Accords.

Biden hasn’t even named an ambassador to Israel yet. 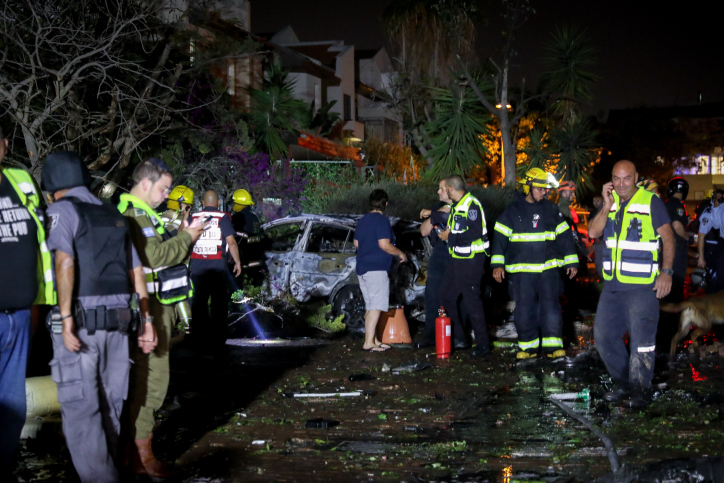 Police and rescue personnel at the scene of a building in Rishon Letzion that was directly hit by a rocket fired from the Gaza Strip, leaving one Israeli dead. More than 130 rockets were fired from Gaza into central Israel on May 11, 2021. Photo by Noam Revkin Fenton/Flash90.

‘A blow to Israeli and other moderate allies’

In a national security brief released by the Jewish Institute for National Security of America (JINSA), the group argues that the Biden administration should continue to condemn rocket fire from the Gaza Strip and support Israel’s right to defend itself.

“The terrorists’ indiscriminate firing of rockets into Israel, including at civilian targets, is a war crime and unrelated to events in Jerusalem. No country in the world, and certainly not the United States, would accept such an intolerable situation,” said JINSA President and CEO Michael Makovsky.

“The Biden administration should acknowledge these facts and clearly state its support for Israel’s right to self-defense,” he added. “Any other U.S. position only incentivizes further terrorist violence, suggesting to Hamas that it can drive a wedge between Jerusalem and Washington, and offering a victory for radicals in the region, and a blow to our Israeli and other moderate allies, as well as the Palestinian people in Gaza, who suffer under Hamas rule.”

JINSA said the Biden administration should support de-escalation by working with the Egyptians and Qataris to bring about a ceasefire.

It also urged the Biden administration to swiftly appoint an ambassador to Israel.

“President Biden has not appointed an ambassador to Israel yet, which puts a strain on the relationship at a time when Israel needs close support from Washington to fend off international condemnation for its justified actions,” said JINSA.

Indeed, Jason Brodsky, a senior Middle East analyst at Iran International, told JNS that while he thinks it has been important that the Biden administration has been engaging with Israeli leadership and supporting its right to defend itself, he is concerned that the lack of an ambassador to Israel is hampering efforts.

“Having a person the president trusts in that position provides an essential link on the ground in these situations,” he said.

Reports have indicated that the Biden administration is close to appointing one with former U.S. State Department official Thomas Nides or former congressman Robert Wexler as the frontrunners.

Nevertheless, Brodsky remains concerned about the role Iran is playing to enable the events over the past several days.

Likewise, he said that the conflict once again highlights how Iran’s dangerous behavior in the Middle East cannot be overlooked.

“These developments, which aren’t new, are nonetheless a reminder that despite the nuclear negotiations taking place in Vienna, Iran’s non-nuclear malign behavior needs to be addressed and not put on the back-burner in order to revive the nuclear deal,” said Brodsky.

He added that it also “demonstrates why relieving terrorism sanctions on Iran’s Central Bank in exchange for a mere re-entry into an old deal is a dangerous proposition.”