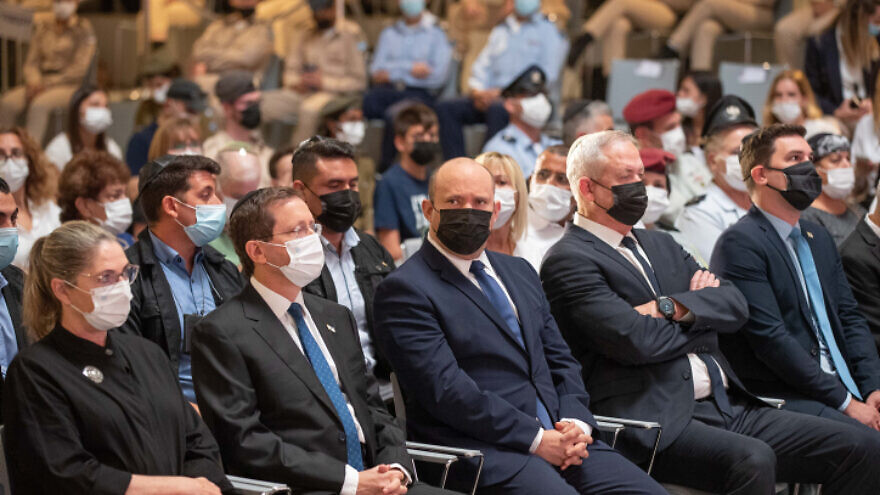 “Something within us changed 48 years ago,” said Israeli Prime Minister Naftali Bennett in his address. “The Yom Kippur War proved how dangerous complacency and arrogance can be. It taught us a lesson in humility, but also the importance of being prepared and organized,” he added.

While the war’s deadly toll was “unbearable,” said Bennett, “What many perceived as a failure, I see as a victory, for the difficult challenge of losing one’s lofty status, but gaining victory nevertheless, both on the Syrian and Egyptian fronts, is remarkable.”

The recapture earlier that morning of the last two of six terrorists that escaped from Israel’s Gilboa Prison on Sept. 6 was another example of this, said Bennett.

“Even today, 48 years later, we have no more important foundations than these: Our unity and mutual guarantee. We learned this in the Yom Kippur War and we realize it again every day. Even what happened this morning, when the security forces completed the recapture of the six terrorists who escaped from Gilboa Prison, was a good—though small—example of what I just spoke about,” said Bennett.

“The Yom Kippur war was a national event that taught us about inflexibility and arrogance. We must do our utmost so that a surprise like that does not happen again—we must always be prepared for war as well as never miss an opportunity for peace,” he said.

Israel, added Herzog, must remain vigilant not only with regard to external threats, but also regarding internal threats to “unity and national resilience.”

“We must stand up to polarization and rifts in Israeli society. To unite, come together, make connections and prevent division—that is the best and only way to deal with internal and external threats,” he said.

Addressing the bereaved families, Israeli Defense Minister Benny Gantz said: “Every day you remember their last sentences, etched in your heart, the hug, the last meeting. We must remember the fallen, and remind ourselves that the responsibility to make sure their deaths were not in vain rests on us.

“We owe the fallen our existence today, in a prosperous and strong country. It has been 48 years, but the pain continues and we miss them no less. These were Israelis from across the country who came together on the holy day to stand up to the enemy. The victory came about, first and foremost, thanks to the commanders and the soldiers on the battlefield.”