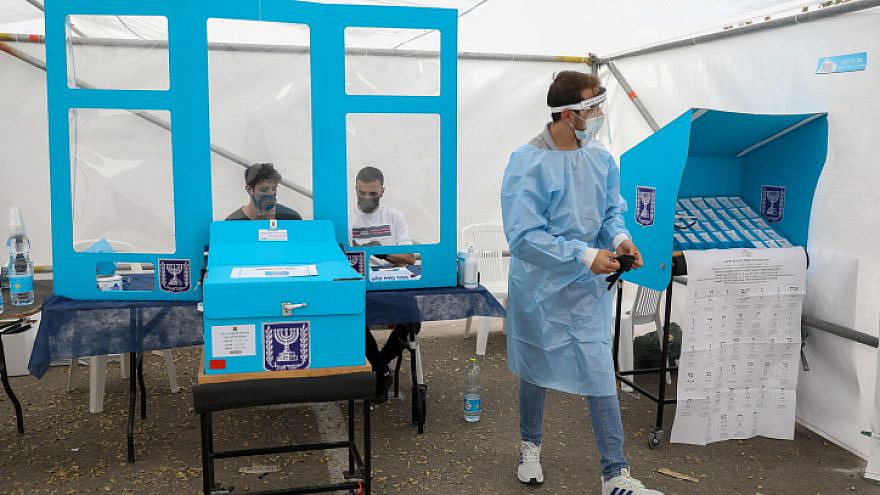 (March 23, 2021 / Israel Hayom) The election for the 24th Knesset, similar to the three before it over the past two years, poses many challenges to the Central Elections Committee, mainly due to the trauma of the coronavirus, which some experts fear could see a surge in its wake. The committee has prepared for this round, as the previous ones in 2020, albeit with slight changes.

Far more double envelopes: In the election for the 23rd Knesset, the number of voters using double envelopes was some 330,000. These included soldiers, police, inmates and guards, official Israeli emissaries abroad, residents of battered women’s shelters, patients in hospitals, those with disabilities, and this year, people who have contracted the coronavirus and are in isolation.

“Vote and Go” stations: Making their election day debut, these stations cater to people with the coronavirus and in isolation. They will be dispersed in 500 tent facilities across the country.

Confirmed cases in taxis: Some 12,000 confirmed cases will arrive at the special “vote and go” stations in Gett taxi cabs, their rides funded by the Central Elections Committee. The cabs will have plastic barriers between the driver and passenger, who will only be allowed to sit in the back seat.

People in isolation: Around 39,000 individuals in isolation will be allowed to enter the “vote and go” stations in their own cars. Those who don’t have a car at their disposal can, as stated, order a Gett taxi funded by the Central Elections Committee.

Drones: The Central Elections Committee has rented aerial drones to keep tabs on the traffic situation at the “vote and go” stations. If a station becomes too congested and people have to wait in line too long, officials can divert incoming voters to other stations.

Voting stations at Ben-Gurion Airport: For the first time in the country’s history, four voting stations will operate at Israel’s main international hub, to allow Israelis arriving from abroad to vote via double envelope. The stations will be placed before the border-control check. Israelis arriving from abroad will have to undergo a Health Ministry inquiry, a COVID-19 test and enter isolation if they haven’t been vaccinated twice.

Coronavirus patients in hospitals: Corona patients hospitalized in any of the 38 medical centers across the country are also able to vote in the election, as with all other patients confined to hospital grounds.

Vote counting: Due to the large increase in the use of double envelopes, the Central Elections Committee has hired some 6,500 vote counters.

A tight schedule: The Central Elections Committee must finish the vote count and calculate the distribution of mandates by the commencement of Shabbat on Friday evening. In other words, it will have less than three days from the time voting stations close at 10 p.m. on Tuesday until Friday evening. This is a tough task, mainly due to the large number of double envelopes, which take longer to count.