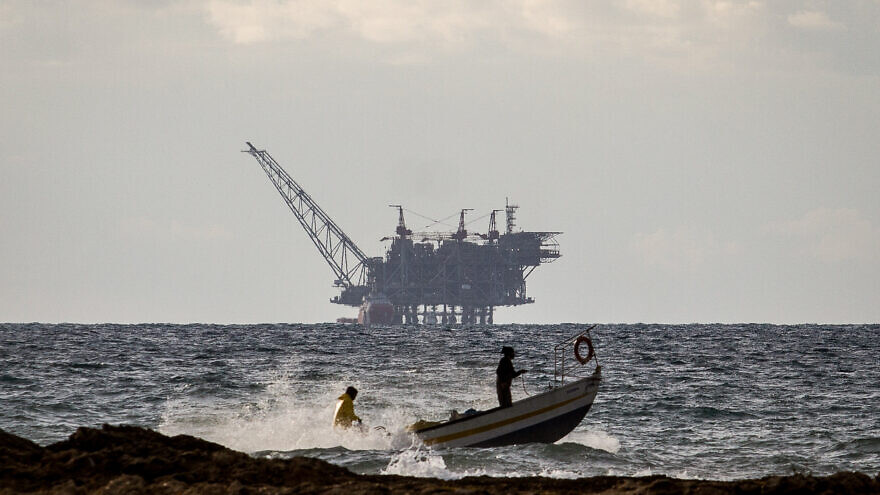 (November 14, 2022 / JNS) It was 22 years ago that PLO chairman and arch-terrorist Yasser Arafat appeared on Palestinian television to announce the discovery of natural gas off the coast of Gaza.

Arafat described the discovery as “a gift from God” to the Palestinian people, smiling from the bridge of a fishing boat. “This will provide a solid foundation for our economy, for establishing an independent state with holy Jerusalem as its capital,” he said. But instead of working to create a Palestinian state, Arafat launched the Second Intifada, and the gas field was closed.

With nearly 1 trillion cubic feet of natural gas to be extracted from the field, Egypt, Hamas, the Palestinian Authority and Israel all want either the gas or a share of the revenue. In October, Egypt’s petroleum minister, Tarek el-Molla, announced that “a framework agreement has been reached” for the development of the offshore gas field. The deal involves the Palestinian engineering firm Consolidated Contractors Company (CCC), the Palestine Investment Fund (PIF), the Egyptian Natural Gas Holding Company (EGAS) and Israel, with assistance and mediation from the United States and the European Union.

Efraim Inbar, president of the Jerusalem Institute for Strategy and Security, told JNS the deal is complicated from a number of angles.

The P.A., he said, wants it to happen because it wants the revenue, but has “no leverage.” Egypt wants to give the P.A. control over the gas field “as leverage against Hamas,” and Israel wants the same thing “because we mistakenly believe it will reduce hostility toward Israel,” said Inbar. “We mistakenly believe that a gas link [in Gaza or Egypt] will lower temptations to attack our links” and that prosperity on the other side will reduce hostility. “I don’t believe it’s true,” he said.

“The main hurdle,” he said, is the need for a Hamas-P.A. (i.e., Hamas-Fatah) agreement, he said. “It is not clear whether they will be able to reach an agreement or will even be able to trust each other,” he added.

According to Inbar, the deal is an opportunity for Israel to “please the Egyptians” since they’re an “important neighbor.”

But while Israel’s security establishment wants to see a stronger P.A., according to Inbar, it does not want to empower Hamas.

The main concern in Israel is that any agreement on gas would see revenue going to Hamas, an internationally-recognized terrorist organization that has sworn to destroy Israel. Under anti-terrorism laws, Hamas cannot receive money through an official international monetary system. Hamas knows this and is therefore insisting the parties find a way to ensure it receives its share of the revenue.

When P.A. Prime Minister Mohammad Shtayyeh announced that a team would be formed to conclude an agreement with Egypt concerning the gas field, Hamas warned against bypassing it and organized demonstrations to demand protection for the rights of the Palestinians over gas resources.

Suhail al-Hindi, a Hamas official in charge of managing natural resources, threatened Israel against “any infringement of our rights to our maritime resources, particularly natural gas off our coast.”

At the same time, another senior Hamas official who spoke to the London-based Al-Araby news site confirmed that the Islamist movement would not prevent the P.A. and Egypt from investing in the Gaza gas field if it would benefit the Strip’s economy.

The Palestine Investment Fund and the Consolidated Contractors Company each own 27.5% of the field, while the remaining 45% will belong to the operating company, which Cairo hopes will be Egyptian.

El-Molla recently announced that the final agreement for developing the Gaza Marine field will be signed between EGAS and the Palestinian government by the end of the first quarter of 2023.

He added that a consortium of specialized companies will be formed under the umbrella of EGAS to develop the field. He emphasized the key role of the East Mediterranean Gas Forum (EMGF) in reaching an agreement between the Palestinians and Israel regarding this issue.

Israel, Egypt and the P.A. are all members of EMGF, established in 2019 along with Jordan, Cyprus, Greece and Italy to coordinate the management of gas resources in the region.

El-Molla added that the natural gas will be piped to Egypt’s gas liquefaction facilities after which the resultant revenue will be transferred to the Palestinians in coordination with Israel.

Barak Bouks, a senior research fellow at the Europa Institute and a lecturer at Bar-Ilan University in Ramat Gan, agreed with Inbar and told JNS that forging an agreement is complicated since while the P.A. is the formal authority over Gaza, it is Hamas that actually controls the territory.

“This is a tricky situation and we need to form an equilibrium of negotiations,” he said.

The 1995 Oslo II Accord granted the P.A. maritime jurisdiction up to 20 nautical miles (23 miles) from the Gaza coast, which enabled the P.A. to sign a 25-year contract with British Gas in November 1999 for gas exploration. Energy company Shell took over the project in 2016 but pulled out two years later due to various regional and political complications.

Bouks said that while the discussion over the gas field goes back two decades, today Hamas is the entity controlling Gaza, and it is therefore complicated to transfer revenues to the people living there unless the relevant authorities can ensure Hamas cannot take the money and use it for terrorism.

“You need to build a mechanism for the money to go to the P.A. and to the inhabitants of Gaza,” he said.

The recently-completed maritime accord between Israel and Hezbollah-controlled Lebanon saw Israel retreat from its long-standing negotiating position.

“It’s not connected and it is connected,” Bouks said. “Because if we need to define a maritime border, the whole notion of the P.A. having a gas field [is on the agenda] once again.”

Hamas saw Israel’s deal with Lebanon and now wants to see if it can achieve a similar one for itself.

But the revenue issue is problematic for Israel.

Bouks suggested that if Amos Hochstein, the U.S. diplomat who mediated the Lebanon talks, “could monitor a mechanism that in Lebanon the money will go to the Lebanese people and not to Hezbollah, maybe in Gaza he can copy that.”