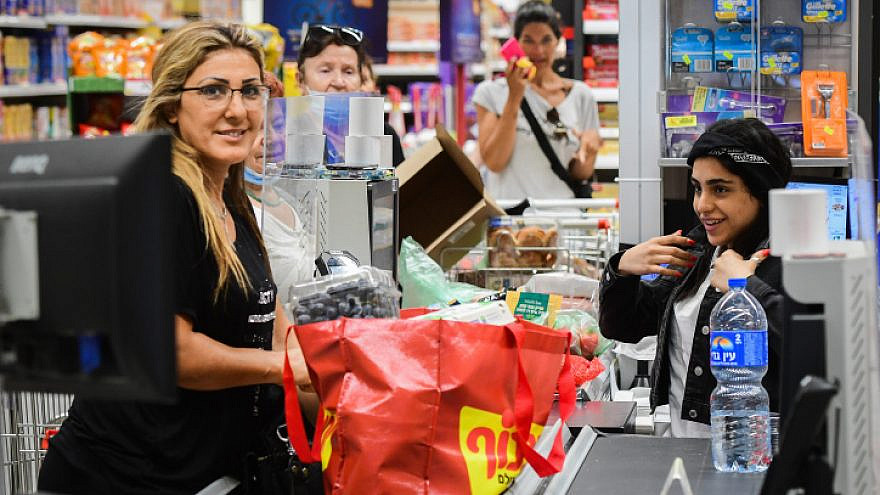 Shoppers at a supermarket in Tel Aviv on June 14, 2021, after the Israeli Health Ministry announced the end of the obligation to wear a mask in closed public places. Photo by Avshalom Sassoni/Flash90.
Spread the word.
Help JNS grow!
Share now:

According to the Israeli Health Ministry, masks will still be required for employees and guests at elder-care facilities who are unvaccinated or who have not recovered from the virus, individuals en route to quarantine as well as those traveling by plane.

Israel is one of the first countries to emerge from the pandemic, which has claimed 3,803,592 lives worldwide and infected more than 175,000,000, according to World Health Organization statistics.

According to ministry data, as of Tuesday morning, there were just 221 active COVID-19 cases in Israel with 25 new cases being identified in the past 24 hours. By comparison, daily cases rose over 10,000 in January.

At a ceremony on June 6 honoring the country’s health workers for their efforts against the pandemic, then-Israeli Prime Minister Benjamin Netanyahu attributed the steep decline in morbidity figures to Israel’s aggressive vaccination campaign.

“Israel’s victory was achieved thanks to two basic elements: The millions of vaccines that we brought to the country and their rapid distribution to the citizens of Israel,” he said.

Earlier the same day, Israel had expanded its vaccination campaign to include those aged 12-16.

“This is huge news; it promises us herd immunity,” Netanyahu said at the ceremony.

As of Tuesday, 5,145,764 Israelis, or nearly 61 percent of the population, had been fully vaccinated against COVID-19, with an additional 336,475 having been partially vaccinated.