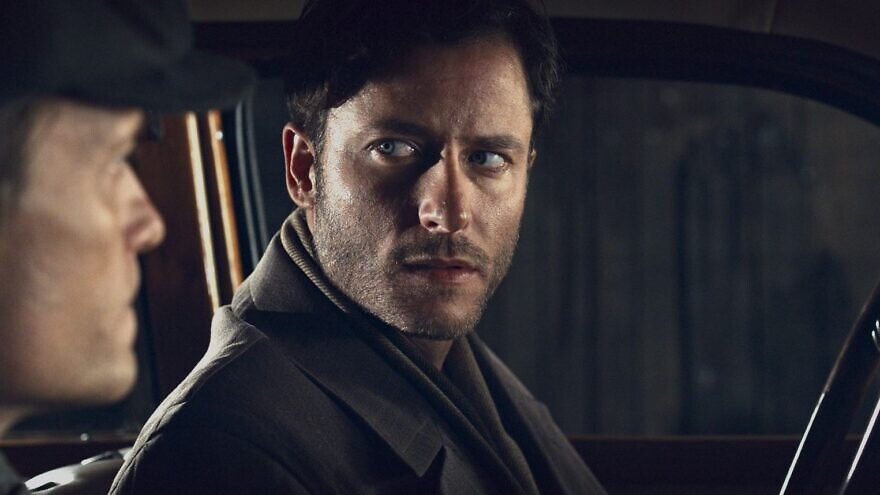 In “Plan A,” Michael (Michael Aloni) wants to make it clear to Max (August Diehl) that only one man is in the driver's seat. Credit: Courtesy of Menemsha Films.
Republish this article
1313 WORDS
Spread the word.
Help JNS grow!
Share now:

(November 10, 2022 / JNS) Though he wears no cape and has no superpowers, Michael Aloni’s character in the film “Plan A” has only one shot at preventing the deaths of millions and making sure the Jews’ hopes of establishing a state are not squashed.

Produced by Menemsha Films and directed by Doran and Yoav Paz, “Plan A” is a must-see powerhouse of a film that reminds the viewer that actions have consequences and Jewish blood is not cheap. As Michael, he must make sure that a plot to poison the water and kill millions of Germans is stopped.

Aloni, 38, is on the money every time he’s on screen, making us feel what is at stake.

World War II ends before Aloni’s character, a soldier in the British Army’s Jewish Brigade, has a chance to kill Nazis on the battlefield. But then he gets an opportunity to find some in hiding.

How would any of us have acted as a survivor whose family was murdered and then had an opportunity to take revenge?

“That’s the exact question the film raises,” Aloni told JNS. “My grandfather fought during the war and was a partisan and was kind of a vigilante.”

As to what attracted Aloni to the film, he said it was the Paz brothers’ excellent directing and the fact that the plot, however far-fetched it might seem, is based on truth.

“I was really fascinated to jump so deep into a story that not a lot of people are aware of,” he said.

Abba Kovner, portrayed with grit and mystery in “Plan A” by a stellar Ishai Golan, was a Holocaust survivor and poet who founded Nakam, a paramilitary organization that took revenge on Nazis. His plan, from which the film gets its title, was for an eye-for-an-eye attack on six million Germans, to be achieved by poisoning a water supply.

As the character Max, August Diehl is haunting to watch as he weighs the romantic idealism of revenge with a pragmatic sense that such an act could make the Jews a pariah in the world and possibly put an end to the Zionist dream.

This is not the first time Aloni has played a character buffeted by war and hardship. In the Israeli drama series “When Heroes Fly,” available on Netflix, Aloni plays Dotan “Himmler” Freidman, a tough Israeli soldier who joins buddies from his unit as they trek to a South American jungle to try to save a friend’s sister.

Aloni said that, while he’s always pondered the courage soldiers displayed in Israel’s 1948-1949 War of Independence and other wars, his character in “Plan A” prompted him to think less about the risks of combat and more about the privilege of having a national army, especially since Jews had long yearned for a time when they could defend themselves.

Known to many as the star of the hit Netflix show “Shtisel,” Aloni has displayed versatility in playing many different kinds of characters.

While Akiva Shtisel, the Hasidic character Aloni plays on the show, would never cheat on his wife, Aloni’s character in the melodrama “The Beauty Queen of Jerusalem,” also on Netflix, isn’t so moral. Following his father’s death, Aloni’s Gabriel Ermoza is forced to marry a woman he doesn’t love while his heart belongs to another. Based on the book by Sarit Yishai-Levi, the show follows Gabriel and his wife Rosa (Hila Saada) as they deal with different struggles in raising their daughters in the Holy Land and takes the viewer from 1917 under Turkish rule, to the British mandate to the establishment of Israel. Difficulties range from violent Arab attacks, to emerging problems with Gabriel’s shop, which sells luxury foods. 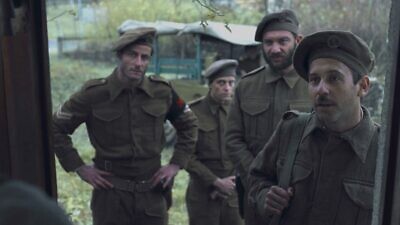 Michael Aloni (left) would be a welcome sight at any front door, other than in a film where he is a soldier and your family has his people’s blood on your hands. Credit: Courtesy of Menemsha Films.

“It’s a wonderful show and I’m happy to be part of it,” Aloni said of the epic “The Beauty Queen of Jerusalem.” “It’s the most expensive production yet to come from Israel and it’s a period piece [taking place] just before ‘Plan A’ kicks into motion. It travels through time in such a marvelous way.”

“The Beauty Queen of Jerusalem” features a breathtaking performance by Swell Ariel Or, who plays Ermoza’s daughter Luna. One man who proposes to her ends up getting hanged. So it’s no surprise that her father wants to make sure she only dates the right person.

When asked what happened when Aloni met the fathers of women he dated, Aloni responded with a laugh. “It varies,” he said. “Some were more protective or less protective. I think we’re more modern today. You don’t have the same issue unless you’re asking for her hand.”

In “Happy Times,” available on Amazon, Aloni again stars as a character named Michael, a man who brings his girlfriend to a family dinner of mostly Israelis in Los Angeles. It turns out to be the dinner from hell. In a wild altercation at the dinner, he is pushed, slaps someone, elbows someone and gets choked out. While unconscious,  someone takes an embarrassing selfie of him and shares it. He wakes up in a fury. Characters drop like flies in the movie, which is more of a black comedy than a horror film.

“I don’t think the character is a bad guy,” Aloni said. “They’re all bad. But it’s always more fun to play the villain. It’s kind of fun to take that role, but in ‘Happy Times,’ he’s trying to survive.”

A small scene with Academy Award winner Jessica Chastain in the HBO miniseries “Scenes From a Marriage” showed that Aloni has the gravitas to go at it with the best of them. As Poli, he wants more than a fling with the married Mira, but she doesn’t know if that’s her thing.

“Working with Jessica, Oscar Isaac and creator Hagai [Levi] was a wonderful experience,” Aloni said. “There were deep layers [in the characters] and it was fun playing off Jessica.”

“I’m always open to do a Marvel movie or DC,” Aloni said.

One role in which Aloni had supernatural abilities was in the thrilling series “Temporarily Dead.” He played Lev Alexander, a man with mysterious powers who has stolen the heart of medical intern Dana Riskin (Agam Rudberg). Some of the scenes between them were tearjerkers.

When I saw Aloni a few years ago after he spoke to a crowd of thousands at a Manhattan synagogue, a woman kissed him on the cheek, and it seemed like she might be temporarily dead. A defibrillator was not needed.

“Shtisel” fans asked if he could bring the show back to life for a third season. He did. Now the fans, including some of the more than 34,000 members on the impressive Facebook page “Shtisel—Let’s Talk About It,” are wondering if there is any chance there can be a season four.

Many Jews are also looking to God for help as they stress over the Israeli or American elections, a tough economy, fears of military conflict and an environment in which everyone seems to want to argue. Aloni said he’s aware that times are stressful, but we can try to think and act in a positive way.

“I think the future holds better and promising things,” he said. “If people are disappointed or have different opinions, we should all keep in mind that we are all humans no matter which side you are taking. If you can understand the other side and have empathy, you can try to be a source of comfort and light.”