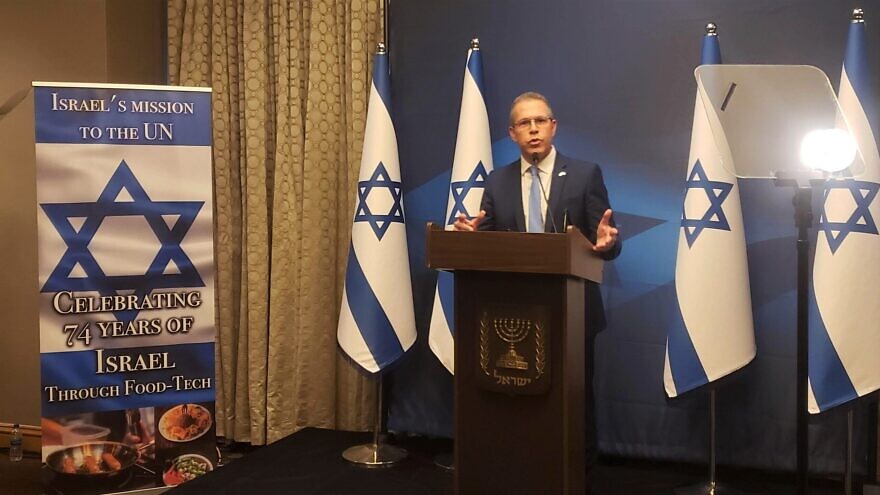 (June 8, 2022 / JNS) In a significant achievement for Israeli diplomacy, the country was elected vice president for the coming year’s U.N. General Assembly session.

Tuesday’s vote by consensus of the body’s 193 members means that Israeli Ambassador to the United Nations Gilad Erdan will chair General Assembly meetings and take part in setting the agenda for its deliberations once he begins his role in September when the General Assembly convenes.

“I will now be representing Israel in a position at the heart of the United Nations. Nothing will stop me—and I mean nothing—from fighting the discrimination against Israel,” said Erdan.

While Iranian and Syrian representatives both voiced their objections to Israel’s candidacy, neither elected to call for a voice vote on the matter.

Israel’s election came on the same day that the U.N. Human Rights Council’s Commission of Inquiry on the Israeli-Palestinian conflict issued its first report, which blames Israel’s “occupation” for the protracted Arab-Israeli conflict.

Israel began a process of removing itself from an isolated, adversarial position within the United Nations under former Israeli Ambassador Danny Danon, a process that Erdan has continued.

Within the past year, Israel has been elected for the first time as a member of the critical U.N. Economic Council (ECOSOC). Additionally, Israeli disability advocate Odelia Fitoussi was chosen to serve on the Committee of Experts on Disability; and the Israeli U.N. mission’s legal adviser Sarah Weiss Maudi was picked to serve as the vice chair of the U.N. Legal Committee. Erdan also led a vigorous campaign for the passing of an Israeli resolution in the General Assembly battling Holocaust denial and distortion.

“This new position gives Israel another platform to present the truth about our country and our contributions to the world, despite the ongoing lies of the Palestinians and others at the United Nations,” said Erdan. “This triumph sends a clear message to our enemies that they will not prevent us from participating in leading roles at the United Nations and in the international arena. Hatred must never triumph over truth.”