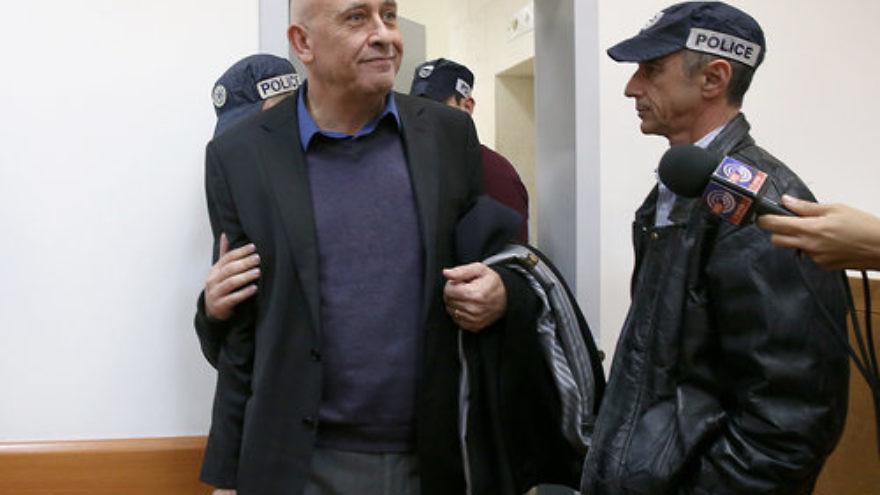 (January 3, 2017 / JNS) Arabs in Israel maintain a higher quality of life than their brethren in most other places in the Middle East, yet a significant number continue to support the Palestinian-Arab struggle against the Jewish state.

One of the latest incidents occurred in the Arab city of Nazareth, where the municipality, headed by Mayor Ali Salam, held a recent event that ended up glorifying terrorist murderer Baha Alyan, who along with an accomplice murdered three Israelis on a bus in Jerusalem last year.

“Hundreds of elementary and high school students and young men and women of all ages arranged themselves in rows” holding books in their laps, a formation they called a “chain of readers,” in the event organized by the Nazareth municipality and the Inma’a Association for Democracy and Capacity Building, the Jerusalem-based Palestinian newspaper Al-Quds reported last month, according to Palestinian Media Watch.

Itamar Marcus, founder and director of Palestinian Media Watch, told JNS.org that when Nazareth officials were notified about the report, they insisted that they never knew about the event’s intention to glorify terrorism.

“They said that in spite of what the press reported, the municipality only approved the readers chain” and did not have prior knowledge about the praise for Alyan, Marcus said.

Indeed, it appears likely that Mayor Salam had no prior knowledge of the plans to glorify a terrorist, since he has been waging an ongoing public battle against Arab politicians whom he accuses of radicalism.

Many Israeli Arabs strongly back the Palestinian narrative in the Israeli-Palestinian conflict, but decide not to act on those beliefs, perhaps because they see Israel as too strong; they continue to work and interact with Israeli Jews on a daily basis.

Yet some Arabs, like Member of Knesset (MK) Basel Ghattas (Joint Arab List), have decided to work against the state through political means and even by supporting terrorists. Ghattas is under investigation for allegedly smuggling cell phones and SIM cards to Palestinian Fatah security prisoners in Israel.

Arab Knesset members like Ghattas have been increasing their visits to Palestinian terrorist and security prisoners, a new report by Israel’s Shin Bet security agency revealed last week. The report found that in 2016, Arab lawmakers submitted 13 requests to visit arch-terrorist Marwan Barghouti and 14 requests to visit Sheikh Raed Salah, head of the outlawed northern branch of the Islamic Movement in Israel.

At the same time, the Arab community is divided on the issue of relations with the state, with many Druze, Christians, Bedouin and a growing number of Muslims rejecting the violent and non-violent struggle against Israel.

Dr. Mordechai Zaken, head of minority affairs in the Israeli Public Security Ministry, told JNS.org that Israel’s Arab public can be divided into various parts and should not be generalized. Arabs can be grouped according to location, religion, sect, professional affiliation and other factors, he said.

For example, in the “triangle”—a cluster of Israeli-Arab towns located near the 1967 lines, including Umm al-Fahm and Kafr Qasem—“there is a greater likelihood of [Arab] support for the Palestinian cause because many families have relatives in the West Bank,” said Zaken.

On the other hand, in northern Israel’s Galilee region, most local Bedouins do not have family members in the West Bank and are less focused on what is going on in the disputed territories.

Asked about Arab politicians’ ability to mobilize Arab citizens against the state, Zaken replied that “they use the land issue because this has been traditionally one of the major unresolved problems of Arabs in Israel, and it has been a cause easier to unite behind. The War of Independence and later acts of land-expropriation throughout the years has roused opposition against the government.”

Regarding the Bedouin living in the southern Negev, Zaken explained that they have long rebelled against whatever regime ruled their territory, going as far back as the Ottoman Empire.

“Rebellion is in their nature and the nomad culture still affects them, as they have for generations lived in constant tension with the sedentary communities,” Zaken said, adding that “Arab politicians use these feelings to try to get them directed against the state, as if they are not receiving all of their rights.”

Arab Christians’ quality of life in Israel continues to improve, and Muslims are catching up to the traditionally high Christian levels of income, education and mobility, said the government official.

“The Christians have led in trying to integrate into Israel society, moving out of their towns and into the big cities. Now many Muslim professionals are following in their footsteps,” said Zaken, who in 2013 initiated Israel’s “Government-Christian Forum,” which attempts to address Israeli Christians’ concerns with the state.

The actions of MK Ghattas, according to Zaken, have sparked significant criticism among Israeli Arabs, with many acknowledging that the lawmaker crossed a line in his support of Palestinian prisoners. “This sentiment is present even among Arabs that support the establishment of a Palestinian state,” Zaken said.

Father Gabriel Naddaf, a Greek Orthodox priest who works to increase Christians’ voluntary enlistment in the Israel Defense Forces and their integration into Israeli society, told JNS.org that since the so-called “Arab Spring” uprisings began in the region in late 2010, “the killing of Christians in the Middle East was a shock for the Christians in Israel.”

Christians living in Arab states, he said, “were not saved from massacres and destruction, and the radicals want to force Christians to change their religion. This is what caused me to talk about the identity of the Christians in Israel.”

Naddaf, whose pro-Israel views have been sharply criticized by many Muslims and Christian Arabs who identify with the Palestinian narrative, recalled that when he began speaking about Arab Christians integrating into Israeli society, his approach was not widely accepted. But with time, he has seen progress. In 2014, the first Israeli-Christian children were registered as “Aramean” instead of “Arab” on their national identification cards. Previously, all minorities in Israel were treated as one group—Arabs.

Some Arabs aggressively oppose Israeli Christians’ increasing desire to identify as Aramean, seeing it as an effort to divide the Arab community.

MK Ghattas and his Christian supporters “are people that don’t identify themselves as Christians first, but instead as Arabs first,” said Naddaf, describing them as people who value ideologies such as nationalism over religion.

Naddaf said most Arab Christians oppose Ghattas and that “his way is not leading anywhere but to hate. He hurts the security of us all.”

“Most of the Christians are moving in my direction” of increasing their integration into Israeli society, asserted Naddaf, adding that many politicians—including Prime Minister Benjamin Netanyahu himself—are showing support for his cause.

“We must help the state and overcome all of the problems,” Naddaf said, “and not let its enemies and the terrorists that surround us weaken the country.”