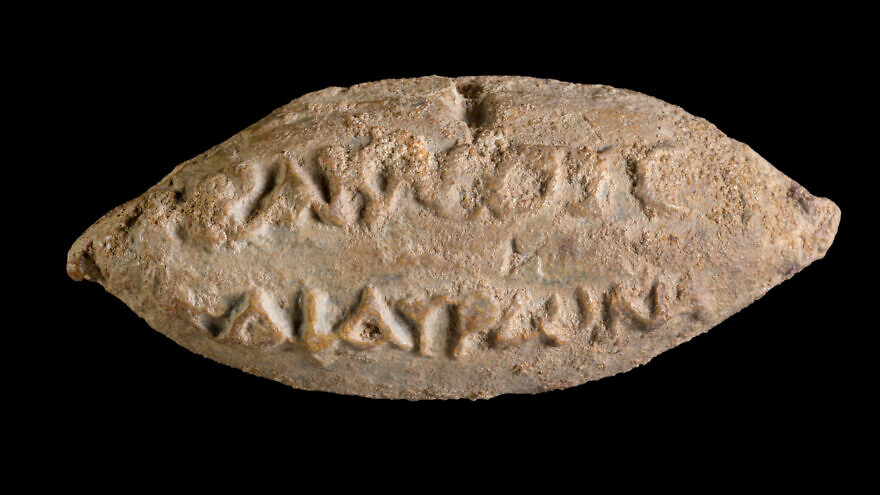 The 1.7-inch sling bullet is made of lead and dates to the time of the Hasmonean dynasty. Photo by Dafna Gazit/IAA.
Spread the word.
Help JNS grow!
Share now:

(December 8, 2022 / JNS) Israeli researchers recently discovered a lead projectile dating from the Hellenistic period in the ancient palace at Yavne, an archaeological site in central Israel.

The 4.4 centimeter (1.7 inch) long projectile was designed to be launched from a sling. It is estimated to be 2,200 years old, placing it at the time of the battles between the Hasmoneans and the Seleucid Empire.

The story of Hanukkah, celebrated this year between Dec. 18-26, commemorates the recapture of Jerusalem from the Seleucids in the second century B.C.E.

“It seems that we will not be able to know for sure if the projectile belonged to a Greek soldier,” said Pablo Bezer and Daniel Varga, managers of the Yavne archaeological site for the Israel Antiquities Authority.

“But it is not impossible that it is related to the conflict between the Greeks and the Hasmoneans. In the second century B.C.E., Yavne was pagan—an ally of the Seleucids [the Greeks who ruled Israel], and was subject to attacks by the Hasmonean armies,” they added.

The projectile bears a Greek inscription: “Victory for Heracles and Hauron.”

Yulia Ustinova of Ben-Gurion University, who decoded the inscription, explained, “The pair of gods Hauron and Heracles were considered divine patrons of Yavne during the Hellenistic period. The inscription on a projectile is the first archaeological evidence of the two protectors of Yavne that was discovered inside Yavne itself. Until today, the pair was only known from one inscription on the Greek island of Delos.”

The inscription was not a call to the deities, but rather “a threat addressed to the adversaries. The inscriptions conveyed a message to unite the warriors, scare the enemy or a call to goad, in a magical way, the bullet itself. These were parts of psychological warfare,” she added.

The find is rare, she added. “Lead bullets are known in the ancient world starting from the 5th century B.C.E, but in Israel few individual bullets have been found with inscriptions on them.”