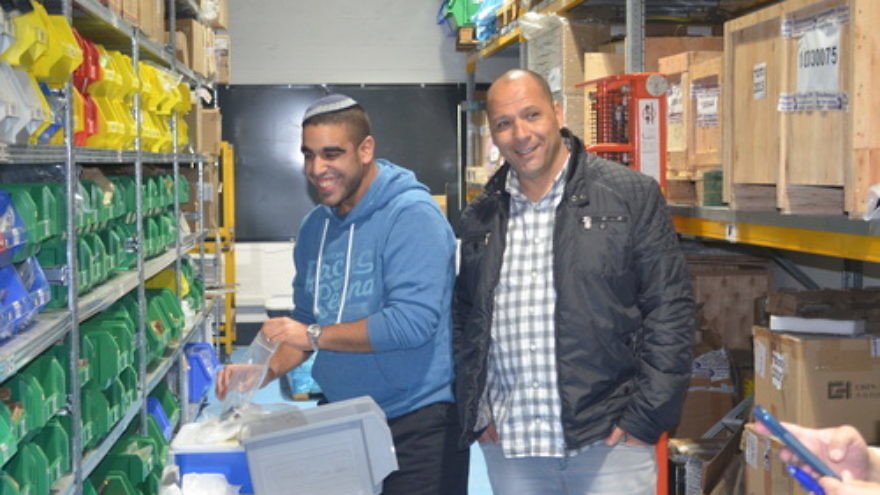 Chen Orpaz (left) with IDF Lt. Col. (Ret.) Ariel Almog, founder of "Special in Uniform," in the warehouse of the Rehovot-based technology company IDEA. Orpaz, who has an intellectual disability, now works at IDEA after picking up the skills he needed from working in the warehouse on an air force base as part of the Special in Uniform project. Credit: Courtesy Jewish National Fund.
Republish this article
1114 WORDS
Spread the word.
Help JNS grow!
Share now:

The warehouse where Chen Orpaz works could be part of any technology company in Israel. Dressed in his blue fleece hoodie and matching blue knitted yarmulke, he looks like any other 23-year-old, save for his constant smile as he glides from aisle to aisle, choosing tiny parts from colored bins for customer orders.

Chen, 23, looks happier than most warehouse workers as he fills orders with quiet determination; perhaps because he’s proud to be working productively when so many people doubted he ever could. For most Israelis, serving in the Israel Defense Forces (IDF) is the key to networking, a career, and a life. But historically, the army has slammed its door in the face of young men like Chen, who has an intellectual disability.

Thousands of young people with cerebral palsy, autism, and intellectual disabilities were turned away until IDF Lt. Col. (Ret.) Ariel Almog in 2008 founded “Special in Uniform” with the Israeli Ministry of Social Services. Special in Uniform, or Gedolim b’Madim in Hebrew, has now been supported by Jewish National Fund (JNF) since 2014. The project makes it possible for Israeli citizens with various disabilities to serve as fully functioning soldiers in regular units.

“In their neighborhood, they’re called pejorative names,” said Almog. “Now, suddenly, they’re serving just like everybody else–they’re equal in society. They really want to do it, and they really want to be equal to everyone else.”

Special in Uniform began during a disastrous moment that changed Almog’s life forever. He suffered a serious, life-threatening head injury while saving a bus full of passengers from a terrorist attack. “When I was in the hospital, I saw people coming in from car accidents, with all kinds of life-altering disabilities. I promised that when I came out, I would do something to help people with disabilities,” Almog said.

At first, the army didn’t want to take Almog’s “special soldiers,” and he said that he understood the risks. “There are many matters to deal with that involve weapons and ammunition. If someone were to get a hold of something they shouldn’t, people could die.” Almog added that to solve this issue guides shadow Special in Uniform soldiers to ensure that nothing goes wrong.

For Chen, Special in Uniform opened a door. “It was very exciting to serve in the army,” he said. “I was so proud to have worn my uniform and to have had the same experiences as my peers.”

Now finished with his service, Chen said he made many good friends in the Israeli Air Force. He proudly showed off his smartphone videos of the time they spent together.

Serving in the IDF is just the beginning of Special in Uniform’s involvement. Almog believes that finding meaningful work for former soldiers is a big part of his responsibilities.

Working now for IDEA, a Rehovot-based tech company that supplies parts and designs for clients like Hewlett Packard, Chen uses skills he picked up while working in the warehouse on an air force base. He reads the names of the various mechanical parts from a list and double-checks to make sure every component is bagged properly before moving down the list.

“I take the parts out from the drawer and I put them in the bag,” Chen said when asked what he does in his new job.

“Before the army,” Almog said, “Chen didn’t have hand-eye coordination; he learned how to do it, and we’re advancing it further here. It’s like math, you have to work at it.”

Chen’s supervisor, Avi, said the company didn’t hesitate to hire him. “Employing Chen isn’t just a matter of charity,” he said. “He’s a warehouse worker, like every other warehouse worker. In the end this is about supplying our customer. We can help him out, but he has to learn and do the work like everyone else.”

When it isn’t possible for an individual to serve fully in the IDF, Special in Uniform matches up the individual’s talents and abilities with a volunteer position in which they can contribute to the country in some meaningful way.

Army volunteers can wear their uniform only on their base, and do not receive a paycheck from the IDF. But for those who can serve a full army term, like Chen, being able to carry out the same tasks as friends and family members is a source of pride and lifelong inspiration.

“If they wear the uniform,” said Almog, “they’re just like every other soldier. They receive a paycheck from the IDF, and when they’re released, they receive grants and all benefits any other soldier would.”

About 50 IDF soldiers and volunteers with autism under the Special in Uniform umbrella serve within an intelligence project called Roim Rachok (“Seeing Far”), which helped scan aerial reconnaissance photos at levels that machines and other soldiers could not resolve during 2014’s Operation Protective Edge. Following the April 2015 earthquake in Nepal, Special in Uniform soldiers packed supplies to aid in rescue efforts, and later received recognition for their contribution to Israel’s safety and security.

Corporal Ben Levi, a soldier with Special in Uniform, was a recipient of the IDF Excellence Award during 2015’s Israel Independence Day. These are just a few of many ways in which this large and capable workforce has proven itself over the last few years.

With JNF’s help, Special in Uniform has grown from a single soldier in its first year to more than 250 today. “We’re in touch with special needs schools all over the country,” Almog said.

With almost 1,000 “graduates” of his program to date, Almog sees an unprecedented demand to expand the program and include many more young people, driven not only to serve their country, but to feel included and accepted.

“They say the Israeli army is the ‘people’s army’ for the land of Israel,” said Almog. “When we say ‘people,’ we need to include all sectors of society, including people with disabilities.”