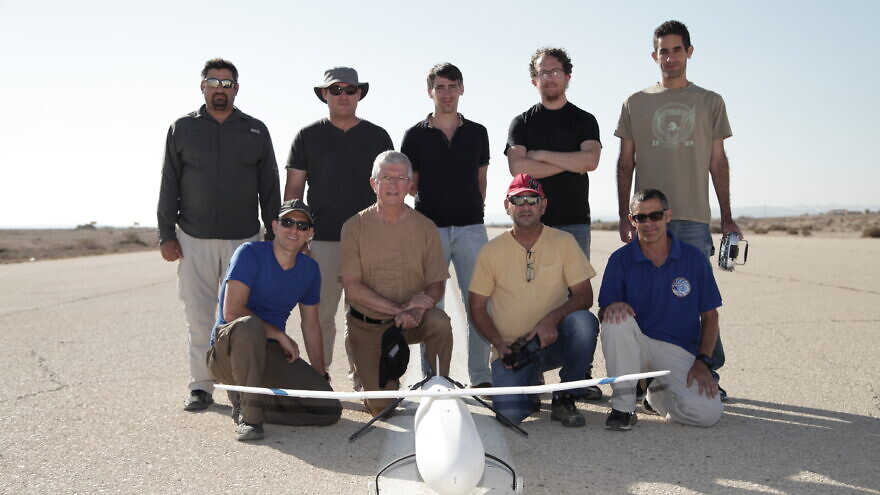 (June 24, 2020 / JNS) Israel’s first 3D-printed unmanned aerial vehicle has been produced and successfully tested in recent months by the Defense Ministry, together with the state-owned Israel Aerospace Industries (IAI).

The UAV looks set to dramatically increase the flexibility of future Israeli unmanned system production, allowing designers to respond very rapidly to feedback from commanders on the ground and printing a new design within one day.

Neta Blum, head of the Flight Technologies Department, which operates under the Defense Ministry’s Directorate for Defense Research and Development, formulated the idea for a 3D-printed UAV after concluding that it would provide a good match for Israel’s security needs.

She says that the method of 3D printing used in the production process, known as selective laser sintering (SLS), decreases both the time it takes to produce new models and the costs of doing so.

“This way of doing it gives us new production capabilities and significant advantages,” says Blum.

Her department is responsible for looking at the Jewish state’s future challenges in the flight sector and identifying the most pressing of these. The two challenges that most stood out were engineering and production costs, notes Blum.

“One of the solutions is printing a light aircraft. Today, it is possible to print anything—hats, shoes, even food. I thought to myself: Why not print a plane? We in the Directorate for Defense Research and Development examine technology that has not been in use in Israel so far. In the past year, all of the required resources for research and development for the UAV were allocated,” she states.

The UAV, dubbed “SkysPrinter,” is a small system designed to take part in combat operations. Larger systems could be produced in the future.

SkysPrinter is made out of 26 components and incorporates materials like metal, carbon and nylon. The parts are easily assembled by operators, using just fasteners and glue.

‘Within a day, we can have a new configuration’

Ido Kressel, manager of Advanced Structural Technologies at IAI’s Engineering and Development Center, describes the UAV as “an innovative concept of utilizing printing technology for a UAV,” adding that it is possible to quickly adjust the design so that the system can carry different types of payloads.

“The main thing is flexibility, our ability to replace the body in line with the payloads,” states Kressel. “It’s very easy to replace the forward section with different printing designs.”

Kressel says the UAV underwent a series of stringent flight tests, including ones that placed the system under 5G force. It also underwent a drop test to see how it faired and passed its trial phase.

“The internal steering mechanism is made out of steel,” he says. “Within a day, we can have a new configuration.”

He adds that an advanced, ultra-accurate testing system was used to ensure that the UAV’s body is fit for military use.

Blum depicts how a rapid feedback loop would look like: “We can have a commander in the field who identifies a certain requirement, who wishes to fly a certain amount of time with a certain payload. We then go back and design the system so that it suits the operational requirements, and print one that will fit the mission within hours.”

According to Blum, it costs around 20,000 NIS (about $5,800) to produce a system that resembles SkysPrinter, while more traditional production costs of existing UAVs usually cost approximately NIS 100,000 (nearly $30,000) to produce.