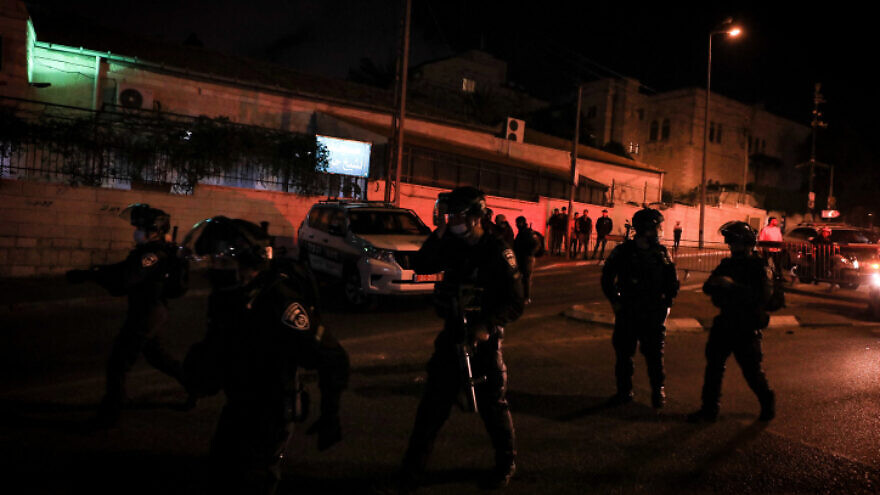 (February 15, 2022 / Israel Hayom) Israeli security officials have warned of the increasing risk of attacks on Jewish visitors to the Temple Mount in Jerusalem’s Old City given recent tensions in the eastern part of the capital and the Sheikh Jarrah/Shimon Hatzadik neighborhood in particular.

While no specific security alert has been issued, previous lone-wolf attacks have been carried out on police officers and Jews at the entrance to the Temple Mount in similarly tense periods. As a result, steps have been taken on the ground to ensure the safety of Jewish visitors to the site.

At the same time, the defense system is also tracking attempts by Hamas to once again inflame tensions on the Temple Mount, as well as the mass busing campaign to the Temple Mount organized by the Southern Branch of the Islamic Movement, which is represented by the Ra’am Party in the Knesset. The buses in question have made thousands of trips to the site from Arab communities across the country over the last year.

Special attention has also been given to moves by senior officials in the outlawed Northern Branch of the Islamic Movement and its leader Sheikh Raed Salah, who was recently released from prison, in particular.

On Monday, Interior Minister Ayelet Shaked banned Salah and his deputy, Kamal Hatib, from leaving the country. Israeli Defense Ministry officials had recommended the move in an effort to thwart Salah’s efforts to renew and expand his activities as well as that of the Islamic organization. Both Salah and Khatib have inflamed tensions over Jewish visits to the Temple Mount in the past.

In July 2020, the Haifa District Court rejected an appeal against Shalah’s sentence. Salah was sentenced to prison for incitement to terror and illegal membership in a terrorist organization over gatherings he organized after two residents of Arab Israeli city Umm al-Fahm killed two officers on the Temple Mount in a deadly attack. Upon his return following his release from prison, Salah was greeted in Umm al-Fahm by supporters and Palestinian flags.

In a joint statement, right-wing NGO Im Tirtzu and Maor Tzemach, chairman of the Lach, Yerushalayim [“For You, Jerusalem”], said: “Well done, Interior Minister. This man is the main inciter among Arab Israelis. The complementary move should be putting him on trial for incitement and permanent house arrest instead of continuing to allow Raed Salah to continue the incitement tour he is now doing across the country.”

Advocacy group Ad Kan responded by saying: “Security forces did the bare minimum to prevent Salah from meeting with terrorists. Salah has continued to incite since being released from prison and was one of the main figures to inflame tensions in the Negev [Region] around Tu B’shvat.” It said the ban on Salah leaving the country was “a necessary and extremely important step in the war on terror. Inciters such as Salah should be treated with a firm hand.”