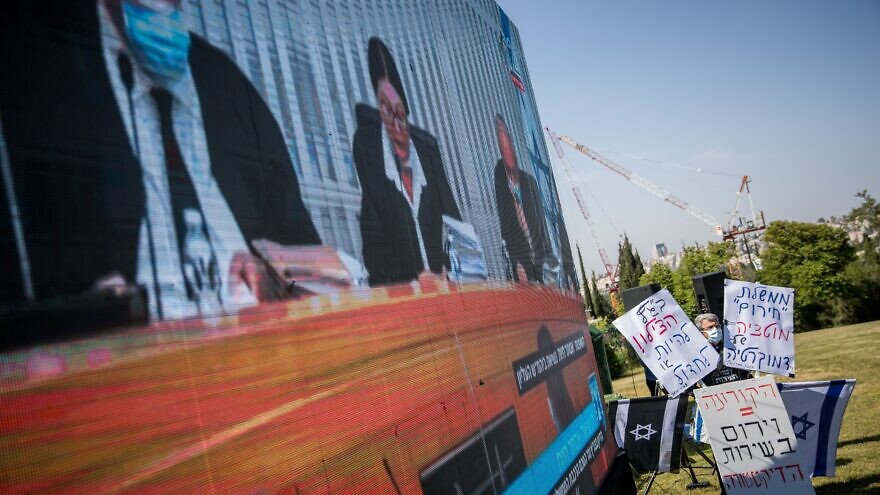 (June 12, 2020 / JNS) Israel’s Supreme Court just reversed the 2017 Regulation Law, which gave Israel the authority to appropriate private Palestinian land in the disputed territories of Judea and Samaria with compensation to the owners.

Eight of the nine justices on the panel ruled the law “unconstitutional” this week on the grounds that it “violates the property rights and equality of Palestinians, and gives clear priority to the interests of Israeli settlers over Palestinian residents.”

The ruling reignited concern over the power of the Supreme Court, as well as the push towards applying sovereignty to parts of Judea and Samaria, and the Jordan Valley, by Israeli Prime Minister Benjamin Netanyahu.

Eugene Kontorovich, director of international law at the Kohelet Policy Forum, expressed his disappointment with the ruling and told JNS that the Supreme Court’s opinion “makes clear that the application of Israeli law [in Judea and Samaria] is possible,” referring to the sovereignty issue.

“The ruling shows the practical need for applying Israeli law,” he said. “It is not about annexation, symbolism or politics. It is the Jewish citizens there who lived under a discriminatory property regime where they are governed under obscure Ottoman laws, where the land register is closed to them and where the Palestinians—with whom they may want to engage in real estate transactions—are not allowed to sell to [Israelis] on pain of death by the Palestinian Authority.”

Kontorovich went on to say that applying Israeli law “is a way of changing the discriminatory and quasi-apartheid-like rules under which the Israelis there live, which the Supreme Court has prevented the Knesset from doing under the current system where Israeli law is not fully applied.”

He stressed that “the court is all-powerful. It could overturn the application of Israeli law, but this opinion gives no basis for doing so.”

Indeed, the ruling by the court provides another point of contention over the power the body has concerning the legislative process and separation of powers.

Such power was one of the key issues in the recent rounds of Knesset elections, and remains a main point of contention between the right and the left, with the former vowing to fight against judicial overreach and the latter defending the judges intervening in political matters.

According to the Library of Congress, in February 2017, the Knesset passed a law for the regulation of land in Judea and Samaria. Land subject to the regulation is defined as that on which Israeli communities were built “in good faith” or “with the consent of the state.”

The law “suspends all pending administrative orders for the evacuation and destruction of Jewish communities in the disputed territories, except for those orders issued for the implementation of judicial decrees or court decisions.”

Netanyahu’s Likud Party responded to the ruling by stating that “it is unfortunate that the Supreme Court would invalidate an important ruling for settlement and its future. We will work to legislate a new law.”

In contrast to the Likud, the Blue and White Party—led by Defense Minister and Vice Premier Benny Gantz—said “we respect the Supreme Court’s decision and will make sure it is upheld.”

‘The court will not limit itself’

Like Kontorovich, Simcha Rothman, legal counsel for the Movement for Governability and Democracy, admonished the Supreme Court over its ruling.

“For many years now, the court does not see any limit to its power,” he told JNS.

He said it is up to elected political officials to place limits on it since “the court will not limit itself.”

Rothman said he could envision a situation where the court “prevents or sabotages” Israel’s ability to apply sovereignty or even allows it to do so, but with limited effect on the ground.

The Regavim Movement, which was one of the initiators of the 2017 Regulation Law, sarcastically congratulated the court’s ruling.

“We congratulate the High Court for finally removing its mask and abandoning its pretense of impartiality. Just last week, the Justices of the High Court urged the state to regulate widespread illegal Arab settlement in Mount Hebron and the Negev by taking steps that include retroactive approval of thousands of illegally built homes and expropriation of Jewish-owned private land.”

Pointing to what it sees as blatant hypocrisy of the court when it comes to regulating illegal Arab construction, Regavim noted that “the justices stressed that ‘the High Court does not run the country.’ ”

The statement continued: “Today’s High Court decision ruled against the self-evident authority of the legislative branch to formulate and implement legal, decent and moral solutions to specific legal issues surrounding the settlement enterprise in Judea and Samaria. Today, at last, the High Court has admitted that for all practical purposes, it is a High Court of Subjective Justice.”

In apparent agreement with Regavim’s message—and Rothman and Kontorovich’s statements—Yoaz Hendel and Zvi Hauser of the Derech Eretz faction of the Blue and White Party said “the future of settlements won’t be decided in a courtroom, but by the Israel government, which has before it a historic chance to extend sovereignty.”