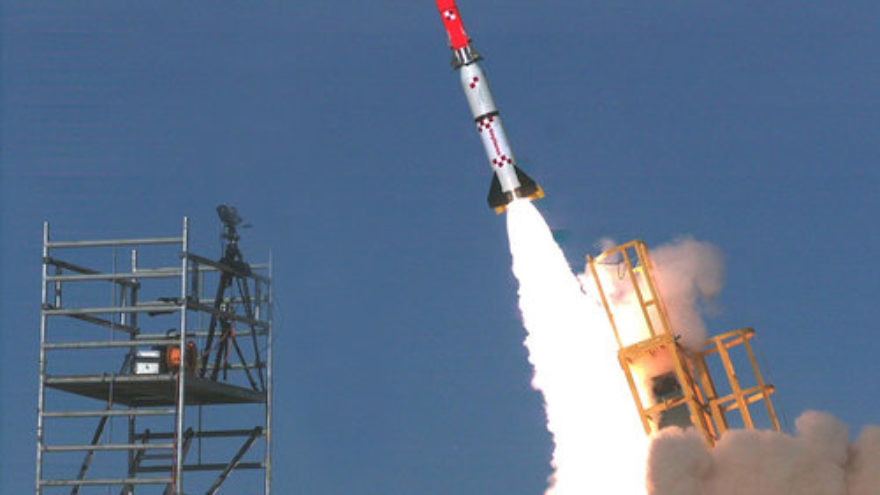 David’s Sling, also known as the “Magic Wand,” joins the Iron Dome and Arrow systems, with all three missile interceptors jointly developed and funded by the U.S. and Israel. As the middle tier of Israel’s missile defense apparatus, David’s Sling is designed to intercept mid-to-long-range ballistic missiles with ranges between 25-190 miles. Iron Dome intercepts short-range targets, and Arrow has the longest-range capabilities—its latest iteration can intercept long-range ballistic missiles outside the Earth’s atmosphere.

Iron Dome has been widely praised for protecting Israeli civilians from indiscriminate rocket attacks emanating from Gaza, particularly during the 2012 and 2014 conflicts between Hamas and Israel. Arrow intercepted a Syrian missile last month in the system’s first operational use in its 17 years of existence.

“David’s Sling is a system that covers the ranges in between,” Netanyahu said Sunday. “It has immense significance [for] Israel’s security, and I would like to praise the people of the Defense Ministry, the IDF, research and development, and all the other elements that acted to enable this system to be operational. We are defending the home front.”

Lieberman said there is “no alternative to this system…Thanks to this system, we will be able to deal with our enemies, which we unfortunately have.”

David’s Sling comes online amid heightened tensions on Israel’s multiple fronts, including its northern borders with Lebanon and Syria as well as southern borders with Gaza and the increasingly active Egyptian Sinai.

Along the Israel-Syria border, the IAF has reportedly struck Syrian military targets and Hezbollah weapons convoys several times in recent months, prompting Syria to fire a surface-to-air missile at an IAF plane and causing Israel to activate Arrow for its historic first operational use in March.

In response to Hezbollah’s massive weapons cache, four new Sa’ar 6 missile ships— which are currently being manufactured in Germany—will each be equipped with dual Iron Dome systems to protect Israel’s offshore gas rigs.

Along the southern borders, there have been several incidents of rockets being fired into Israeli territory from Gaza and the Sinai since the beginning of 2017.

The possibility of increased rocket fire into southern Israel has emerged following the recent assassination of high-ranking Hamas terrorist Mazen Faqha—for which Gaza-ruling Hamas blames Israel, though the Jewish state has neither confirmed nor denied involvement. Hamas has issued multiple calls for revenge.

Since the 50-day war in Gaza in 2014, Hamas has significantly expanded its efforts to develop its rocket capabilities. The Palestinian terror group has reportedly started producing new high-powered rockets, similar to those produced by Hezbollah, and has designed the rockets to exploit vulnerabilities in the Iron Dome system by equipping the weapons with high-explosive payloads and only firing them at close-range targets.