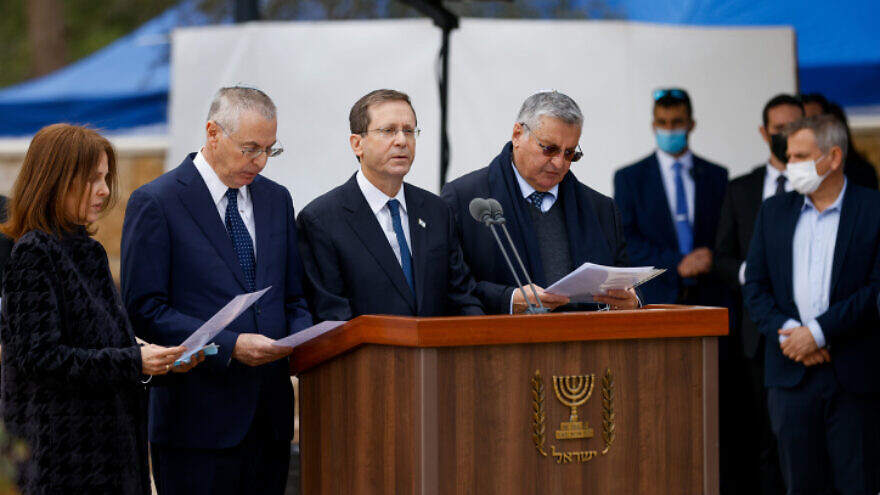 (January 13, 2022 / JNS) Aura Herzog, Israel’s former first lady and the mother of Israel’s current president, Isaac Herzog, was buried on Wednesday at the Great Leaders of the Nation Plot on Mount Herzl, in Jerusalem. She was laid to rest next to her husband, Chaim Herzog, Israel’s sixth president, who served from 1983 to 1993. He died in 1997.

The president spoke movingly about his mother’s life and how she juggled the requirements of being a private family person with the public national role of a first lady.

He said that she had “three great loves” in her life; for her husband and her family, the State of Israel, and lastly, for being a warm and accommodating host.

At least two generations of her family had lived in Israel, helping to found Motza and Hadera, as well as constructing factories in Neve Tzedek. The Ottomans expelled them to Egypt during World War One, and it was at her Cairo home that she first encountered the British Army major who was later to become her husband.

Herzog explained that it was his mother who gave him the nickname “Boujie,” “as an expression of true motherly love.” He also recounted how she was a pioneer of the “green struggle” and one of the founders of the Council for a Beautiful Israel and its educational center in Yarkon Park.

“You loved beautifying our land and creating pretty spaces,” he said.

Biden wrote: “Your mother was an extraordinary individual who dedicated her life to the nation she loved.” And in a hand-written addition, said, “Your mother was someone who I admired greatly. To this day, I feel honored that I met her.”