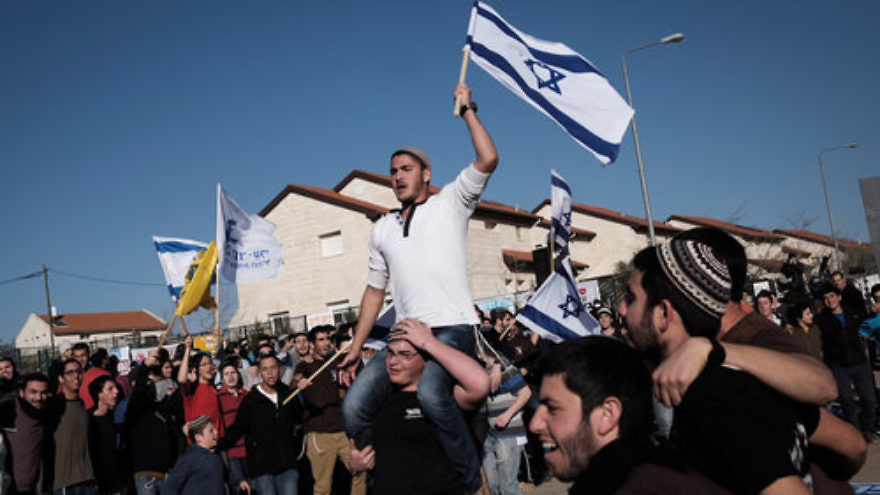 (February 9, 2017 / JNS) Just days after the settlement outpost of Amona was evacuated and demolished by order of Israel’s High Court of Justice, the Knesset passed controversial legislation to retroactively legalize all settlement housing sitting on property that has been identified as private Palestinian land.

The law’s passage is being hailed by supporters of Israel’s 40-year-old settlement enterprise as a step toward extension of full Israeli sovereignty over the disputed territories of Judea and Samaria, commonly known as the West Bank. Opponents have labeled the law a “land grab” and have petitioned Israel’s High Court to overturn it on the grounds that its passage violates international law.

Yet according to several leading legal scholars, the “Regulation Law” does not contradict Israeli law, and precedents both inside and outside Israel can be invoked to justify its passage within the context of international law.

“I wouldn’t call it a land grab,” Alan Baker, a former legal adviser to Israel’s Foreign Ministry and Israel’s former ambassador to Canada. “These people have been already living where they are living for many years. The opposition to this law is more of a political issue.”

Israeli Attorney General Avichai Mandelblit—a political appointee of Prime Minister Benjamin Netanyahu—has opted to oppose the law, which was pushed through by Israel’s governing coalition, publicly warning that the measure is “indefensible” before Israel’s High Court.

Kontorovich asserted that many of the law’s opponents are sensitive to any accusation that the settlement enterprise is a violation of international law.

“They have seen the reactions to settlement building in the United Nations, in Europe and in the previous U.S. administration of Barack Obama, and they are scared of international protest,” Kontorovich told JNS.org.

But within Israel, Kontorovich suggested, “Israeli law can and should supersede international law.”

The Regulation Law seeks to protect the current owners of homes that were built on land that was later determined to be “private Palestinian land.” But Kontorovich said that “this term is misleading.”

“In the overwhelming majority of cases, no individual Palestinians have come forward to claim the lands,” said Kontorovich, adding that in most cases, no Palestinian property owners had “asserted their interests for decades after houses were built.”

During the past several years, the High Court has ruled that Jewish homes built on private Palestinian land should be evacuated and demolished. While these rulings effectively penalize the Jewish residents, this recourse does little to compensate Palestinian land owners who still are not granted access to the property, which is often situated within the security boundaries of Jewish communities or Israeli military installations.

Baker said the Regulation Law actually does more to benefit the Palestinian land owners than demolitions.

“It can go in both directions,” he said. “It will encourage those Palestinians who have ownership claims to put forward their claims in the first place. It might bring about a situation whereby the government will want to offer Palestinians financial compensation in order to legally change the ownership status, in the way that this law intends.”

Baker added that the law “won’t encourage the building of any new outposts. Now it is just a question for how to deal with the present outposts that already exist.”

While he noted that there are international precedents for providing such remuneration in the case of disputed or “occupied” territories, including in the nearby country of Cyprus, Baker suggested that such precedents are not likely to sway Israel’s High Court in favor of the law. “It is likely that the court will overturn the law,” he said.

“If the Supreme Court considers that the law runs against Israel’s constitutional principles, including the fact that international law is part of the Israeli law, it can overturn this legislation and repeal it,” said Baker. “Ultimately, the way Israel’s legal system is built, the High Court has the ultimate say.”

The Israeli High Court is often more aggressive in overturning legislation it does not approve of than courts in other nations. “Israel’s High Court has a substantially different view of what democracy means, which is to protect a moral code which it deems worthy,” as opposed to protecting the spirit of the laws passed by a democratically elected government, Kontorovich said.

Baker further explained that if the court rejects the legislation, the Knesset’s next attempt to change land-ownership laws that govern the disputed territories might be to extend Israeli sovereignty over the West Bank. He said such a step would be “drastic” and “may possibly need to go to a national referendum.”

Israel, said Baker, has not been the first party “trying to unilaterally change the status of the territory.”

“When the Palestinians went to the U.N. and tried to get statehood [in 2011], that was a clear attempt to try and change the status of the territory, which is a fundamental breach of the Oslo Accords,” he said. Following that statehood bid, Baker said Israel “could have come along and said in view of the fact that you have done this, we consider the Oslo Accords void, and therefore we are free to do what we want.”