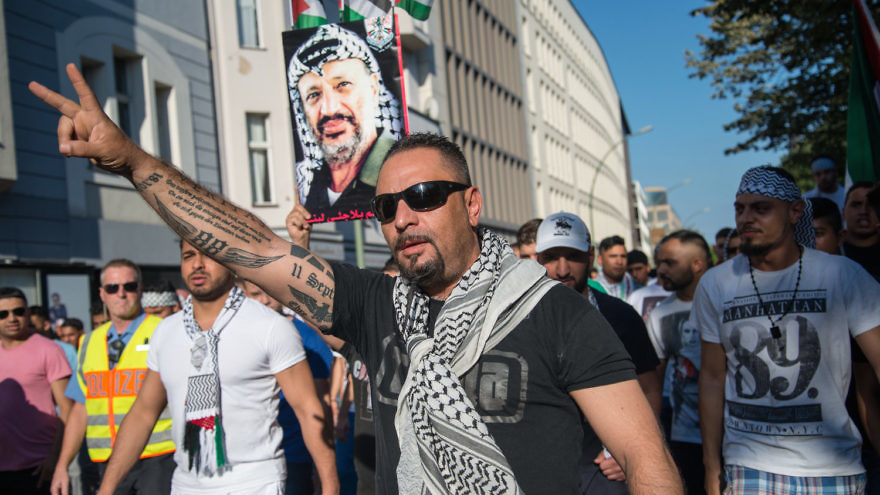 (December 19, 2017 / JNS) Due to the wars in Syria and Iraq as well as other conflicts in Asia and Africa, Germany took in more than 1 million migrants in 2015 and 2016, fundamentally reshaping the country. While the migration has significantly slowed in 2017, to around 200,000, Germany has been grappling with backlash from anti-immigration political parties and the threat of Islamic terrorism.

At the same time, in the fledgling German Jewish community—which stands at approximately 100,000 people, its largest size since World War II—fears are growing that migration from Muslim countries with long histories of anti-Semitism might prompt a reversal of Germany’s confrontation of its anti-Semitic past as well as its strong relationship with Israel.

A study released last week by the American Jewish Committee (AJC) has led to renewed focus on Germany’s migration issue. The study, which was based on interviews with 68 migrants from Iraq and Syria as well as follow-up interviews with 85 additional respondents, found that anti-Semitic “thought patterns and stereotypes were very widespread throughout all the interviews.”

The study also found that “almost all Arab interviewees considered a fundamentally negative image of Israel to be natural and as a matter of course questioned Israel’s right to exist.”

“The AJC study confirms empirically what was long common knowledge among observers of Muslim anti-Semitism in Germany,” Benjamin Weinthal, a fellow at the Foundation for Defense of Democracies (FDD) think tank and a German correspondent for The Jerusalem Post, told JNS.

Weinthal said there is a “potent recipe for societal and political disintegration” in Germany when “one combines the over 1 million refugees and migrants from mainly Muslim-majority countries—who are largely infected with contemporary anti-Semitism—with Germans who hold widespread modern anti-Semitic views.”

Dr. Günther Jikeli, a historian and expert on anti-Semitism who teaches at Indiana University and the University of Potsdam, conducted the AJC study. He told JNS that he has observed a rise in anti-Semitism in Germany since 2000 on the far right and left of the political spectrum, and that the recent influx of migrants provided the impetus for a comprehensive study on the issue.

Among the forms of anti-Semitism that Jikeli and his colleagues found among survey respondents were not only classic anti-Semitic views such as “Jews are rich” and references to The Protocols of the Elders of Zion, but also the blaming of Jews and Israel for the 9/11 attacks, the rise of Islamic State and the Syrian Civil War.

Yet the news wasn’t all negative. Survey respondents from Middle East minority groups like the Kurds and Yazidis expressed sympathy toward Jews and Israel.

“Even among Arab Muslim refugees, there are some who are willing to rethink the learned and indoctrinated stereotypes,” Jikeli said. “Some know that Syrians have been treated by Israeli doctors for free, and that the Syrian government and ISIS are even worse than how the propaganda has portrayed Israel.”

The survey results came against the backdrop of widespread anti-Israel protests in Berlin and Munich following President Donald Trump’s recent recognition of Jerusalem as Israel’s capital. Thousands of demonstrators—mainly Arabs and Turks—took to the streets of Germany burning Israeli flags, chanting anti-Semitic slogans and flying the flags of terrorist groups like Hamas.

Jikeli noted that following the Jerusalem announcement, several Muslim and pro-Palestinian groups in Germany used mosques as a platform to discredit the Jewish connection to Jerusalem.

“Muslim Brotherhood organizations and radical Palestinian associations in Germany, such as the Council for Imams and Scholars, which is associated with the Central Council of Muslims in Germany, sought to inflame tensions against Israel by calling for its members to highlight in Friday prayers that Jerusalem belongs to Muslims only,” he said.

German leaders swiftly condemned the anti-Semitism and anti-Zionism displayed during the protests.

People burning Israeli flags on German streets “do not understand, or do not respect, what it means to be German,” President Frank-Walter Steinmeier said at a Hanukkah event last week, Germany’s Deutsche Welle reported.

Steinmeier said all Germans must be held accountable for such actions—including migrants.

“This responsibility does not recognize caveats for migrant backgrounds and no exceptions for newcomers,” he said. “It is non-negotiable, for everyone who lives here and wants to live here!”

Nevertheless, the Jewish community has urged Germany to do more to counter anti-Israeli and anti-Semitic sentiment among migrants. The Central Council of Jews in Germany has repeatedly called for the government to appoint a commissioner for combating anti-Semitism.

In the wake of its study, AJC’s Berlin Director Deidre Berger said German political leaders “must make certain that anti-Semitic attitudes will not be tolerated, and that infractions of the law will be prosecuted.”

Germany’s acting interior minister, Thomas de Maiziere, told the German newspaper Bild am Sonntag regarding the protests, “Each crime motivated by anti-Semitism is one too many and shameful for our country.”

Weinthal believes that de Maiziere needs to go further than creating a commissioner to combat anti-Semitism.

“Why doesn’t he just immediately outlaw all of the terror groups,” he said, mentioning Hezbollah, Iran’s Islamic Revolutionary Guard Corps and the Popular Front for the Liberation of Palestine.

Jikeli said the German government needs to “develop an integration policy which helps new migrants to participate in democratic ways in society, which includes learning values of democracy…non-discrimination for religion, ethnicity, sexual orientation and gender, and abstention from any calls for the destruction of Israel, a partner country for Germany.”

“This is the only way forward,” he said. “Any calls for repatriation will not only do more injustice to the refugees who have suffered a lot—it will also backfire because it will lead to more isolation.”

In Jikeli’s estimation, the long-term question on this issue is, “Do the majority of Germans condemn anti-Semitism, including hatred against Israel, or do they endorse anti-Semitism in anti-Zionist forms, which is voiced only more openly and aggressively by migrant minorities?”