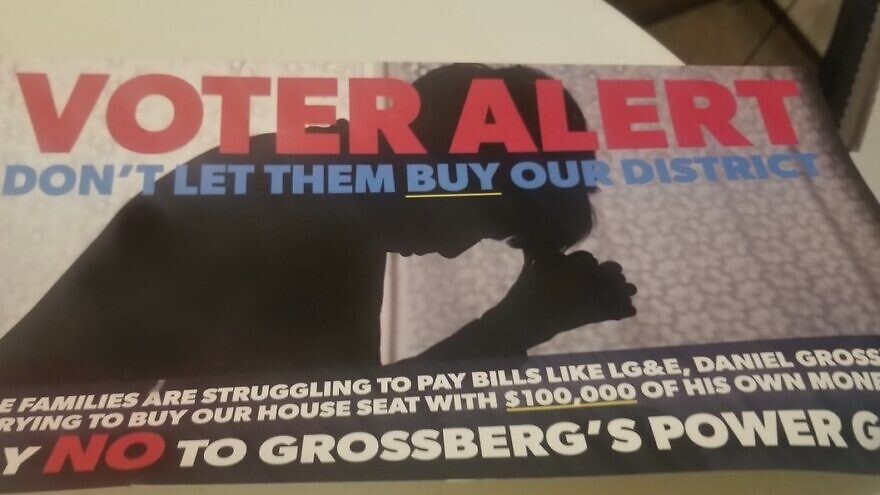 A controversial campaign mailer that was sent out by Kentucky House Rep. Thomas Burch prior to the Democratic Primary in May 2022. Source: Twitter.
Spread the word.
Help JNS grow!
Share now:

(May 17, 2022 / JNS) A campaign mailer by a member of Kentucky’s statehouse is being labeled as anti-Semitic by local groups, who say it draws on historical stereotypes of Jewish controlling the banks and government.

“Voter Alert: Don’t let them buy our district. While families are struggling to pay bills … Daniel Grossberg is trying to buy our house seat with $100,000 of his own money. Say NO to Grossberg’s power grab,” says the mailer for Democratic House Rep. Thomas Burch, the long-serving state representative in Kentucky.

He is facing off against Daniel Grossberg and Neal Turpin in Tuesday’s Democratic primary for the 30th House District in Kentucky, an area that includes Louisville.

Holly Huffnagle, American Jewish Committee’s director for combating anti-Semitism, said “Rep. Tom Burch’s campaign ad against his Jewish opponent told voters to not ‘let them buy our district.’ This type of language, blaming Jews for grabbing power through money, is dangerous. Rep. Burch should know better than to wade into these troublesome waters.”

In a statement, the Jewish Federation of the Bluegrass said “it is again horrific that an incumbent legislator or any of the Kentucky House of Representatives would use this type of anti-Semitic trope against another candidate who is a Jewish man. We must hear them and believe that they believe this. It’s no mistake; it’s no slip of the tongue. It’s passive-aggressive anti-Semitic behavior.”

Also speaking out against the flier is Kentucky House Speaker David Osborne, who issued a statement saying, “We stand with our friends in the Jewish community and condemn any intentional use of terminology that breeds bigotry and hate. We would hope that Rep. Burch would take the opportunity to apologize and find this an opportunity to gain a better understanding of how deeply harmful statements can be not only to our Jewish community but also to our commonwealth.”

He added that “without an acknowledgment, there will be no progress.”

In February, a man walked into the office of Craig Greenberg, a member of the local Jewish community and mayoral candidate, and shot at him, narrowly missing Greenberg. Quintez Brown was indicted in that case and is facing local and federal charges. Authorities have said that Brown had targeted Greenberg directly.

“Anti-Semitism cannot be ignored in our community,” said Rabbi Shlomo Litvin, director of Chabad of the Bluegrass and chair of the Kentucky Jewish Council. “Silence in the face of hate is wrong.”