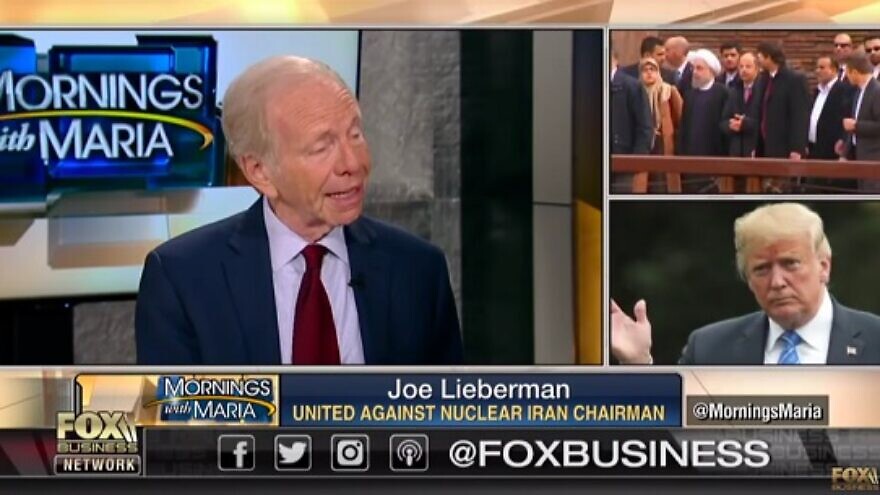 (September 25, 2022 / JNS) In the shadow of the 77th U.N. General Assembly in New York, a group of high-level politicians, senior officials and human rights activists committed to warning the world about the dangers of a nuclear-armed Iran gathered on Sept. 21 in mid-town Manhattan for the sixth annual UANI Iran Summit.

United Against Nuclear Iran’s mission is to educate the public and policymakers about the threats posed by the Islamic Republic. The conference coincided with a speech to the General Assembly by Iranian President Ebrahim Raisi, an appearance conference participants decried.

JNS sat down with UANI Chairman and former U.S. Senator from Connecticut Joe Lieberman along with UANI CEO and former U.S. Ambassador to the United Nations for Management and Reform Mark Wallace to discuss the threat from Tehran and the Biden administration’s Iran policy.

Both found it difficult to make sense of the administration’s desire to revive the Joint Comprehensive Plan of Action (JCPOA), or 2015 nuclear deal, given the Islamic Republic’s malicious actions.

“It’s a puzzle to me why the administration continues to pursue an agreement with Iran,” Lieberman told JNS. “Iran reminds me of an old expression, which I first heard from a New Haven democratic political boss but then somebody told me it was in the Talmud, which is, ‘Don’t spit on my face and tell me it’s raining.’ I mean, the Iranian government keeps spitting on our face, more than that, they’re trying to kill Americans. They cheat. They lie. And the administration wants to convince itself that it’s raining.”

Lieberman said that the reason may be that the original 2015 agreement was seen as a “major accomplishment” by the Obama administration and many, including then-Vice President Joe Biden, were part of that administration. “They resent that President Trump pulled us out of it,” he said.

Nothing about the deal is logical, from the way negotiations on reviving it are being conducted, with the U.S. sent “down the hall to another room” while other countries, “including the Russians, of all people” deliver messages for Iran, to the fact that the U.S. is negotiating with a “repressive” regime at all, he said.

“And the Iranians have done something unprecedented in American history, which is they’re trying to kill Americans on American soil. In the not-so-distant past that would have been a cause for war,” Lieberman said.

Wallace said the Biden administration has become so focused on achieving a deal that it has lost track of what it is meant to achieve. The administration’s push for a deal “borders on a fervent religion.

He noted that the push for an accord flies in the face of widespread American opposition. A UANI-commissioned poll found that 60 percent of likely voters opposed the U.S. making any agreement with a nuclear Iran.

As to whether the recent killing of a 22-year-old woman, Mahsa Amini, by Iranian “morality police” would impact American thinking about Iran, Lieberman said he wasn’t sure. “People are so focused on the economy, immigration, the latest ups and downs with former President Trump. But it’s an outrage. From all I can tell, Mahsa Amina was an innocent, accidental victim of a cruel regime. Her hair in her hijab wasn’t exactly the way some morality police wanted it. And they beat her to the point that she died,” he said.

“How can you make an agreement you could trust with a government that would allow something like that to happen?” he asked. “But the second thing, which is really remarkable, is that spontaneous protests have erupted all over Iran in response to that. It started in her hometown. And that shows the extent to which the people of Iran have had it with their government,” he said.

“It might take the women of Iran to defeat the mullahs of Iran,” Wallace added. He said it would be a kind of “political malpractice” to repeat the mistakes of 2009 when another young Iranian woman, Neda Agha-Soltan, was gunned down by a sniper during protests. The United States made two mistakes then: It didn’t support the protests and it didn’t provide internet access whereby the protesters could communicate with each other beyond the reach of the Iranian security services, he said.

“We should hear more from the United States and from the Europeans in support of these demonstrations. That’s No. 1. And No. 2, we need to provide the means by which the protesters can communicate safely and beyond the reach of the Iranian security services,” Wallace said. “Elon Musk has indicated that he would use his Starlink technology approved by the Treasury to allow Iranians internet access that couldn’t be monitored as easily.”

Both Lieberman and Wallace agreed that Iran must not get a nuclear bomb, even if that means military action. “We’re getting [to a military strike], because I don’t think there’s any real hope of an agreement that will stop their nuclear development program,” said Lieberman.

Wallace said, “If we went back five, 10, 15, 20 years, and we said that Iran was running systematic efforts to kill Americans on U.S. soil, and also had over nine kilograms of 60% enriched uranium metal, I would have said, ‘We must be at war,’ because these would have been red lines in another era. So I don’t know when the right time is but I do know, historically, in our relationship with Iran, that their behavior has crossed many of the red lines that we, in a bipartisan manner, set for decades,”

Lieberman said that the ultimate solution to the Iranian question will probably be a rebellion by the Iranian people. “There’s a growing popular resistance in Iran. And it’s quite remarkably courageous when you think about how brutal the government is, but the people feel, according to Janis Joplin, they have nothing left to lose,” he said, referencing the chorus line “Freedom’s just another word for nothing left to lose” from her hit song “Me and Bobby McGee.”