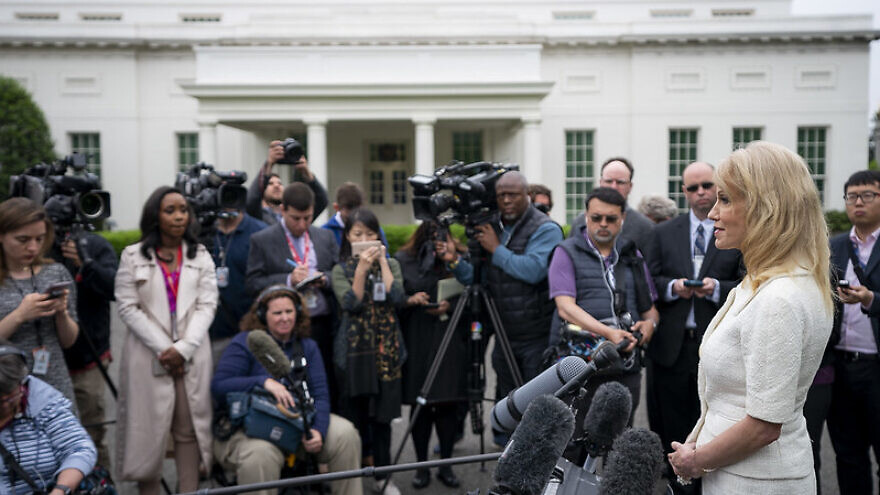 (June 25, 2020 / JNS) White House adviser Kellyanne Conway on Wednesday criticized the “scare tactics” employed by critics of Israel’s plan to apply its sovereignty to the Jordan Valley, and parts of Judea and Samaria.

Asked during a press conference outside the White House whether U.S. President Donald Trump was concerned over the reaction of Arab countries or the Palestinians to the Israeli sovereignty move, Conway said, “The same thing was predicted [in the past]. That there would be mayhem and murder and death and destruction.”

When Trump pulled the United States out of the out of the Paris Climate Accords, “[Critics were saying,] ‘we’re all going to die the next day, we’re going to melt to death,’ ” she said. When the president moved the U.S. embassy to Jerusalem, she added, critics said “ ‘the Arab world was going to disappear.’ Thank God that wasn’t true.”

“There’s always this scare tactic, shock, the conscious tactic of all the bad that’s going to happen, and then it doesn’t happen,” she said. “Thank God. We still mention Him in the White House.”

Referring to a conversation with an Israeli official, Conway said that “if you look at the difference of what’s reported and the reality on the ground in Israel, they feel that these conversations couldn’t even be had without the last three-and-a-half years of President Trump being the best friend to Israel, to quote [Israeli Prime Minister Benjamin] Netanyahu, that Israel has ever had.”

Conway then listed a number of Trump’s pro-Israel moves, saying, “Whether it’s making good on the promise of eight presidents, including President Trump … Republican and Democratic presidents all promised to move the U.S. embassy to Jerusalem, to recognize Jerusalem as the capital of Israel, and he’s the first one to make good on that promise.”

Trump “also recognized the Golan Heights,” she said. “He has tried to bring peace to the Middle East in many different ways.”

She added that the president “wants to be an agent for peace.”

With regard to the ongoing White House meetings on Israel’s sovereignty bid, Conway said that she would leave it up to the president to make any announcements on the issue.

“We are having conversations, there are conversations being had. Obviously, the president will have an announcement. He’s talked about this in the past, and I’ll leave it to him to give you a big announcement,” she said.