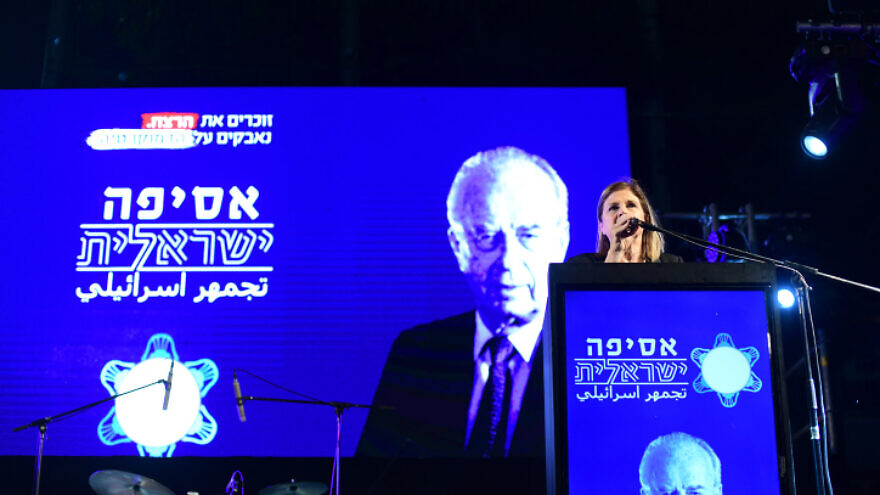 Dalia Rabin, the daughter of the late Prime Minister Yitzhak Rabin, speaks in Tel Aviv during a discussion circles event on the subject of “sanctity of life” on the eve of the 26th memorial day marking Rabin's assassination, Oct. 17, 2021. Photo by Tomer Neuberg/Flash90.
Republish this article
722 WORDS
Spread the word.
Help JNS grow!
Share now:

(October 18, 2021 / JNS) Israel marked 26 years since the assassination of Israeli Prime Minister Yitzhak Rabin as part of a series of memorial events that began on Sunday night and continued through Monday. The date is recognized annually on the 12th of Cheshvan on the Jewish calendar, which this year fell on Oct. 18.

Rabin, 73, a longtime leader of the Labor Party leader, was shot multiple times at the end of a rally in support of the Oslo Accords on Nov. 4, 1995. He died on the operating table at Tel Aviv Sourasky Medical Center (Ichilov Hospital).

The shooter, Yigal Amir, was a 25-year-old student and far-right extremist who opposed the accords—the agreement signed in 1993 between Israel and the Palestinian Liberation Organization led by Yasser Arafat.

To start off the events on Sunday evening, some 6,000 youth across the country took part in discussion circles about the “sanctity of life.”

On Monday, Israeli Prime Minister Naftali Bennett, Israeli President Isaac Herzog and Rabin’s family members participated in state ceremonies, including a candle-lighting at the president’s official residence, followed by a special plenum held by the Knesset to honor Rabin’s memory. This year, opposition leader and former Prime Minister Benjamin Netanyahu did not take part in the official ceremony.

Knesset Speaker Mickey Levy, who opened the special plenum with a moment of silence, called the assassination “a traumatic event that left a permanent wound in the heart of Israeli democracy that has not healed,” reported Ynet news.

He said “the trauma and shock of that gloomy night have accompanied every argument and controversy we have known since. Something in the innocence of political life in Israel broke that night and was gone forever because since [then], we know this can happen.”

Addressing the Knesset, Bennett made it a point to say that Rabin’s anniversary should not be used to vilify the right-wing in Israel.

“I hope that since the assassination we have learned how dangerous violence is, and we must not silence entire sections of our society; we must not vilify an entire community because one individual committed a crime. Neither the right assassinated Rabin nor the religious. Yigal Amir assassinated Rabin,” he said, according to Ynet.

“Yigal Amir’s ideological heirs are today serving in Israel’s Knesset. Had we not performed the miracle of the ‘change government,’ they would be ministers in the government,” he said.

Lapid, whose speech was interrupted by Religious Zionist Party leader Bezalel Smotrich and Shas chairman Arye Deri, who were ejected from the plenum, said the most recent round of elections in June were a “referendum on democracy.” He added that the current political debate in Israel is not between left or right but between those who “believe in democracy and those who do not,” and those “who want to unite the people against those who want to tear them apart.”

“In a democratic regime it is the right and duty of the opposition to sharply criticize the government, but see what happens here, there is one side, it does not matter if it is in the opposition or the coalition, that everything it says and does even if these are the most extreme expressions,” he said.

The opposition leader said that since Rabin’s assassination, people have used memorials to the slain leader to attack the Israeli right-wing.

“Over the years, I have heard at these events abusive and false things about the camp I represent and also about me personally, but I gritted my teeth, I restrained myself,” he said, going on to explain why he didn’t attend the day’s official ceremony, saying he fulfilled his official duties as prime minister but is not required to attend at opposition leader.

“We treat the late Yitzhak Rabin with deep respect for his many virtues for his great contribution to Israel’s security and yet we do not hide for a moment the disagreements between us; this is statesmanship,” said Netanyahu.

The day also included a ceremony at the Mount Herzl Military Cemetery in Jerusalem, attended by family members, Knesset members and ministers, and public figures.

Events were capped by an 8 p.m. memorial ceremony in the eponymous Rabin Square in Tel Aviv. 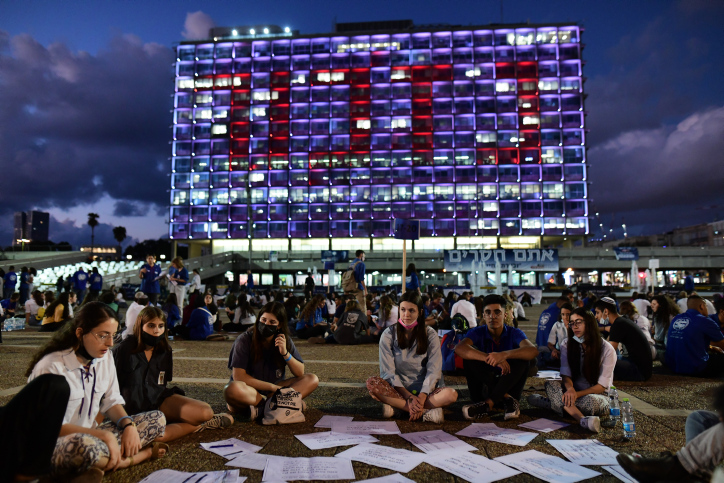 Discussion circles in Rabin Square in Tel Aviv on the eve of the 26th memorial day of the assassination of Prime Minister Yitzhak Rabin, Oct. 17, 2021. Photo by Tomer Neuberg/Flash90.
Republish this article in your newspaper or website