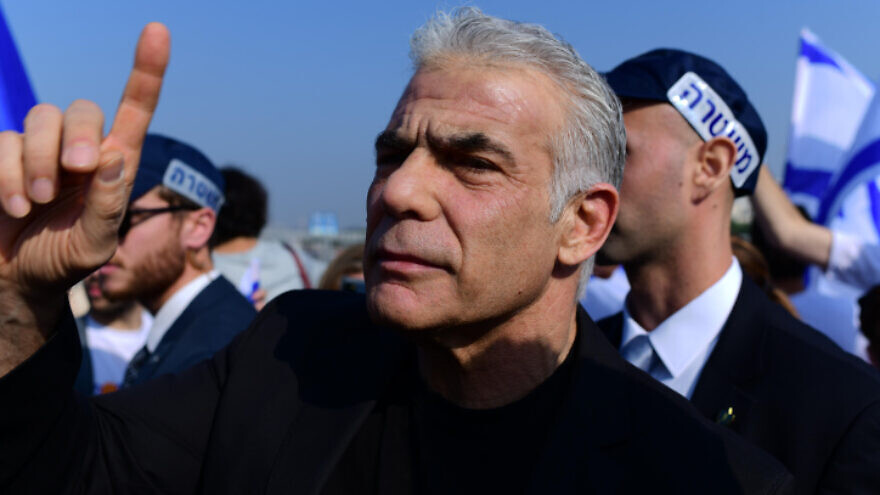 (January 23, 2023 / JNS) Israeli opposition leader Yair Lapid has called on President Isaac Herzog to set up a committee that will recommend a “balanced” plan to reform the judiciary.

“I proposed to President Herzog that he form a presidential committee to offer a reasonable recommendation to improve the judicial system and find the proper balance between the legislative and judicial branches,” said Lapid on Monday. “President Herzog is considering the proposal. I hope and believe the committee will be formed and will prevent the destruction of our democracy and the terrible division among the people of Israel.”

The comments come against the background of a political battle around the government’s judicial reform plan, which aims to curtail what it says is judicial overreach. The plan would give the Knesset the ability to overturn court decisions that cancel laws, allow elected officials greater influence in selecting judges, and reduce the power of legal advisers attached to government ministries.

Lapid earlier this month described the prospective judicial reforms as an “extreme regime change” and vowed to continue fighting in streets across the country in “a war over our home.”

His comments were echoed by National Unity Party leader Benny Gantz, who said: “If you [Prime Minister Benjamin Netanyahu] continue the way you are going, the responsibility for the civil war that is brewing in Israeli society will be on you.

“This is the time to go out en masse to demonstrate, the time to make the country tremble,” Gantz added.

In response, Netanyahu has accused his political opponents of “planting the seeds of disaster” by encouraging a public rebellion against a democratically-elected government.

“What we are trying to do is return Israel to the correct balance….We got a clear mandate from the public to execute the [judicial reform] plans….[This] is not the destruction of democracy, but the strengthening of democracy,” said Netanyahu.