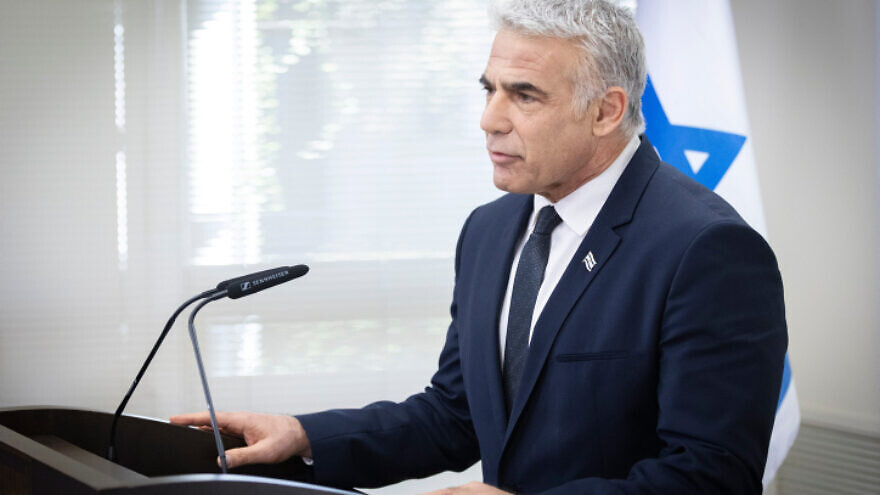 In a press briefing, Lapid said the Diplomatic-Security Cabinet would soon convene to discuss a scenario in which the Palestinian Authority announced it was willing to start talks with Israel. Citing an “intelligence-based assessment,” he said that Israel should expect to see a significant increase in allegations from the Palestinians and their supporters that Israel was an apartheid state.

If the situation were to deteriorate, Israeli sports and cultural institutions would be the first to be impacted, he said. Lapid noted the Foreign Ministry would focus a large part of its efforts on contending with such anti-Israel campaigns in the new year.

Foreign Ministry Director-General Alon Ushpiz told reporters: “In the coming year, we expect to see resolutions and processes with the potential to cause significant damage, and there is real danger an official U.N. body will determine Israel is an apartheid state.”

According to the Foreign Ministry’s assessments, such declarations could be issued by the U.N. Human Rights Council, the U.N. Security Council or one of the international courts.

Voicing his support for negotiations toward a two-state solution, Lapid said, “Without diplomatic dialogue with the Palestinians, this [the threat of Israel being designated an apartheid state] will only grow more severe. We need to be cautious of a situation in which the world says the Palestinians are promoting diplomatic talks and Israel is refusing. On one hand, they talk about promoting talks, and on the other hand, they file petitions against Israel at [the International Criminal Court at] The Hague and pay salaries to terrorists. This is the challenge the Foreign Ministry faces, and it is headed in our direction.”

Lapid, however, explained that talks could not be held in the current political climate. He further said that when he enters the role of the premier, the composition of the coalition government would prevent such a process from being advanced.

“This government is composed of a range [of people], from [New Hope Knesset member] Ze’ev Elkin and [Yamina MK] Ayelet Shaked to [Ra’am leader] Mansour Abbas. I think it’s good that today’s foreign minister and the person who will serve from August 2023 as prime minister is a man who believes in the two-state solution. But even after the rotation, the coalition’s makeup will remain the same, and I will adhere to every agreement that I made with my partners,” said Lapid.

Dr. Dore Gold, president of the Jerusalem Center for Public Affairs and a former Foreign Ministry director-general and Israeli envoy to the U.N., criticized Lapid’s remarks.

“The foreign minister must call on the head of the P.A., Mahmoud Abbas, to cease his international efforts in violation of the Oslo Accords the P.A. is a signatory to and prevent him from acting against Israel in U.N. institutions,” said Gold.

“Abbas, his senior ministers and relatives have greatly enjoyed the past medical treatment they needed in Israel and received without prejudice, without regard to difference sin religion, race or sex. So Israel, to their mind, was not an apartheid state,” he added.

The right-wing Ad Kan organization said in a statement, “We recommend Minister Lapid read the reports by radical leftist groups in Israel to learn that left-wing delegitimization organizations are the ones pushing the world’s policies and international organizations to define Israel as an apartheid state. The time has come for Lapid to instruct the staff in his and all the other ministries to handle those same home-based organizations that harm the State of Israel through the dissemination of lies around the world.”