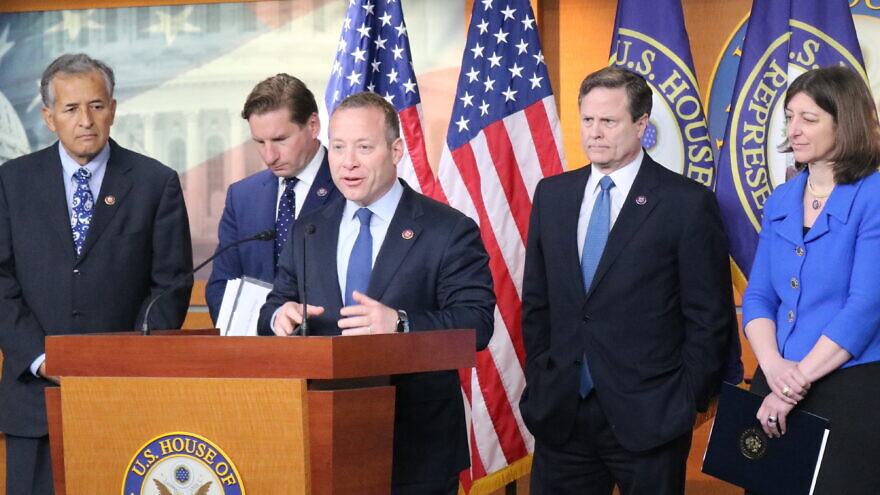 (April 8, 2022 / JNS) Democrats and Republicans in the U.S. House of Representatives held separate press conferences on Wednesday, both though shared the same message—that they were worried about the concessions American negotiators appear ready to make as negotiations to re-enter the Joint Comprehensive Plan of Action (JCPOA) with Iran have reached a critical juncture.

Democrats held their press conference in the morning, organized by Reps. Josh Gottheimer (D-N.J.) and Elaine Luria (D-Va.), who were joined at the conference by Reps. Juan Vargas (D-Calif.) Dean Phillips (D-Minn.) and Donald Norcross (D-N.J.), all of whom expressed concerns with what appear to be the final status of the Iran nuclear negotiations.

The members were concerned about the extent that the United States appears willing to capitulate to Iran on lifting sanctions, providing the regime with funds to further enhance its ability to sponsor terrorist activity in the Middle East. The sanctions relief, according to Luria, is not only connected to Iran’s nuclear activity but also unrelated sanctions against Iran levied because of its sponsorship of terrorist organizations.

The members were particularly upset by information that America is willing to remove the Islamic Revolutionary Guard Corps (IRGC) from its list of Foreign Terrorist Organizations.

Luria said that lifting sanctions on Iranian leaders and delisting the IRGC would perpetuate Iran’s destabilization of the Middle East and provide Iran with the resources to attack U.S. allies in the area, making the United States less safe.

“History has proven that those resources will be used to further their violent and dangerous adventures,” she said. “So I think we cannot afford another failed agreement.”

Gottheimer reiterated the concerns stated by Luria, adding that the removal of the IRGC, which is responsible for the deaths of hundreds of American soldiers, from the list of terrorist organizations would be irresponsible.

“We can’t gamble with American lives and remove the Foreign Terrorist Organization or FTO designation, as the State Department has often noted ‘plays a critical role in our fight against terrorism’ and is ‘an effective means of curtailing support for terrorist activities,’ ” he said. “We cannot treat one of our most powerful diplomatic tools, which we use to get cold-blooded killers out of the terrorist business, as a cheap bargaining tool. Imagine how our allies will react?”

Gottheimer pointed out that the IRGC has recently fired at least a dozen ballistic missiles toward an American compound in Iraq and that the sanctions relief will provide Iran with billions of dollars to further endanger American lives.

He then noted another concern that is rumored to be part of the new agreement: that Russia will be the judge of Iran’s compliance under the deal, without any oversight by the United States or its European partners.

“Are we seriously going to let a war criminal, [Russian President] Vladimir Putin, be the guaranteer of this deal? At a time when he continues to charge on with his brutal war of aggression, it’s absurd to think that Putin would also be capable of being an impartial party for this agreement,” said the congressman. “Iran and Russia are already working on creating a financial system to avoid U.S. sanctions, proving that they are negotiating in bad faith.”

Gottheimer said that while each member has their own issues concerning the deal, they are united in sending the message to American negotiators that a longer and stronger deal is needed instead of a shorter and weaker one.

‘We cannot allow this under any circumstances’

Norcross, who unlike Gottheimer and Luria was already serving in Congress when the original deal was passed, said that it was the definition of insanity to consider Iran’s terrorist activities separate from the nuclear negotiations.

“We need only to look to today’s headlines to see what happens when you have mad men with nuclear weapons—and what they can do and what they can threaten—to know that we cannot allow this under any circumstances,” he said.

Republicans followed in the afternoon, featuring nearly every Republican member of the House Foreign Affairs Committee. They focused on similar issues as the Democrats though more often connected the capitulations to what they believe was U.S. President Joe Biden’s weakness and failure on the world stage.

Rep. Joe Wilson (R-S.C.), who started off the conference, pointed out that opposition to the JCPOA is bipartisan, saying that he had worked with former Democrats Connecticut Sen. Joe Lieberman and former New York Rep. Eliot Engel to raise issues of how irresponsible this agreement would be.

“Knowing what we already know, and that it’s suicidal,” he said.

Even when the Obama administration agreed to the original deal in 2015, it did not address Iran’s development of Intercontinental Ballistic Missiles (ICBM), which he said could be used to launch a nuclear weapon at the United States.

Wilson also said that it was inconceivable that the United States is working with the Russians on the deal as Putin has already shown himself to be a war criminal.

Republicans, he said, recently enforced an alternative, which was not to “appease or acquiesce to the mullahs of Tehran” but to enforce the “maximum pressure” sanctions regime put on Iran by the Trump administration.

Rep. Steve Chabot (R-Ohio), the former chairman of the Middle East subcommittee of the House Foreign Affairs Committee and current ranking member of the Asia and Pacific subcommittee, pointed out that the administration is providing sweeping sanctions relief for weak nuclear commitments without rigorous inspections that are scheduled to expire soon anyway.

The results of sanctions relief given by the Obama administration, he said, allowed Iran to prop up the regime of Syrian President Bashar Assad; use the Houthis in Yemen to attack Saudi Arabia and the United Arab Emirates; target U.S. military personnel in Iraq; and support Hamas and Hezbollah against Israel.

“President Biden brought back the same people who sold out our country and our allies to Iran the first time,” said Chabot. “This time, it looks like the deal will be even worse.”

Rep. Lee Zeldin (R-N.Y.) said that the sunset provisions were part of what made the original deal flawed.

“By not adjusting the sunset provision dates, that actually makes this next deal worse than the original deal. By not doing anything to strengthen the flaws with the verification regime and by still not dealing with any of Iran’s non-nuclear bad activities, the leverage that brings the Iranians to the table in the first place is once again negotiated away where you’re not going to be able to deal with any of that,” he said. “On top of that, if you want to remove the IRGC from the terrorist designation, again, you’re talking about entering into a deal that is worse than the original 2015 agreement.”

Zeldin and Rep. Scott Perry (R-Pa.), both said the deal needs to be brought to Congress for approval under the Iran Nuclear Agreement Review Act of 2015, which the administration is working to avoid doing.