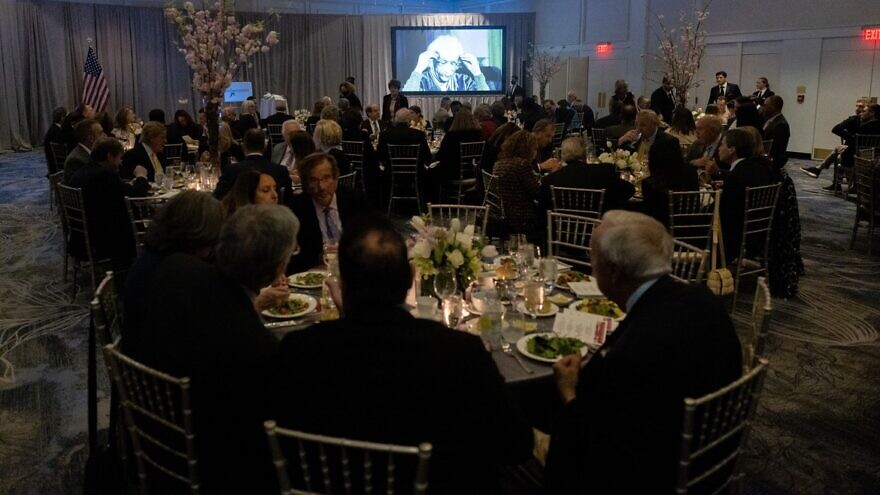 Nearly 200 people filled the ballroom of the Four Seasons Hotel in the Georgetown neighborhood of Washington, D.C., for the American Friends of the Hebrew University annual SCOPUS Award Gala on April 28, 2022. Shown on the screen is Albert Einstein, who was among the university's founders. Photo by Nathan Posner.
Republish this article
1729 WORDS
Spread the word.
Help JNS grow!
Share now:

(May 6, 2022 / JNS) American Friends of the Hebrew University held its annual SCOPUS Award Gala on April 28, where two politically involved couples from opposite parties were given the prestigious award in a show of bipartisanship and unity on behalf of the university’s mission.

Nearly 200 people filled the ballroom of the Four Seasons Hotel in the Georgetown neighborhood of Washington, D.C., where, earlier in the day, the Republican Jewish Coalition held its annual leadership meeting.

AFHU’s National SCOPUS Award honors individuals who “demonstrate humanitarian concerns throughout their lifetime” and are distinguished by “their civic engagement, their concern to achieve peaceful coexistence among people and nations, and their work on behalf of important causes locally, nationally and internationally.” Previous winners included Nobel laureate, author and Holocaust survivor Elie Wiesel; former President Gerald Ford; former first lady Nancy Reagan; film director and founder of the USC Shoah Foundation Steven Spielberg and former Pennsylvania governor and the first U.S. Secretary of Homeland Security Tom Ridge. It is named after Mount Scopus, where the Hebrew University’s first cornerstones were laid in 1918.

Dan Schlessinger, board chairman of the Hebrew University of Jerusalem, who kicked off the program, said the honorees dedicated their lives to ensuring that the priorities of the Jewish community are made significant to national leaders and advocated for an enduring relationship between the United States and Israel.

AFHU CEO Joshua Rednik, who introduced the award winners at the end of the program, made a point of noting the unity represented at the dinner with Republicans and Democrats in attendance, and the vastly different missions of the awardees, joined in the values that they share with Hebrew University, including the pursuit of advanced education, engineering, biomedical research, and the development of next-generation information technologies and computer sciences.

Mellman and Horowitz did not appear in person to receive the award, though Mellman sent a speech that was read by Rednik in which he spoke of how the values he grew up with—Zionism, Judaism and education—were realized by the university.

“Like Judaism, it offers a unique blend of the particular and the universal,” wrote Mellman. “The university and its faculty make tremendous contributions to the fields of Jewish philosophy and history, the study of the Bible, archeology and much more. But its seven faculties and 14 schools have also registered 7,000 patents and given the world Nobel laureates in economics, chemistry and physics; a Fields medalist in mathematics; and three Turing Award winners in computer science.”

He was also delighted that the university was working on integrating Israeli Arabs into Israeli society.

“Like Israel, like the Jewish people, Hebrew University is truly a … light onto the nations,” he wrote. 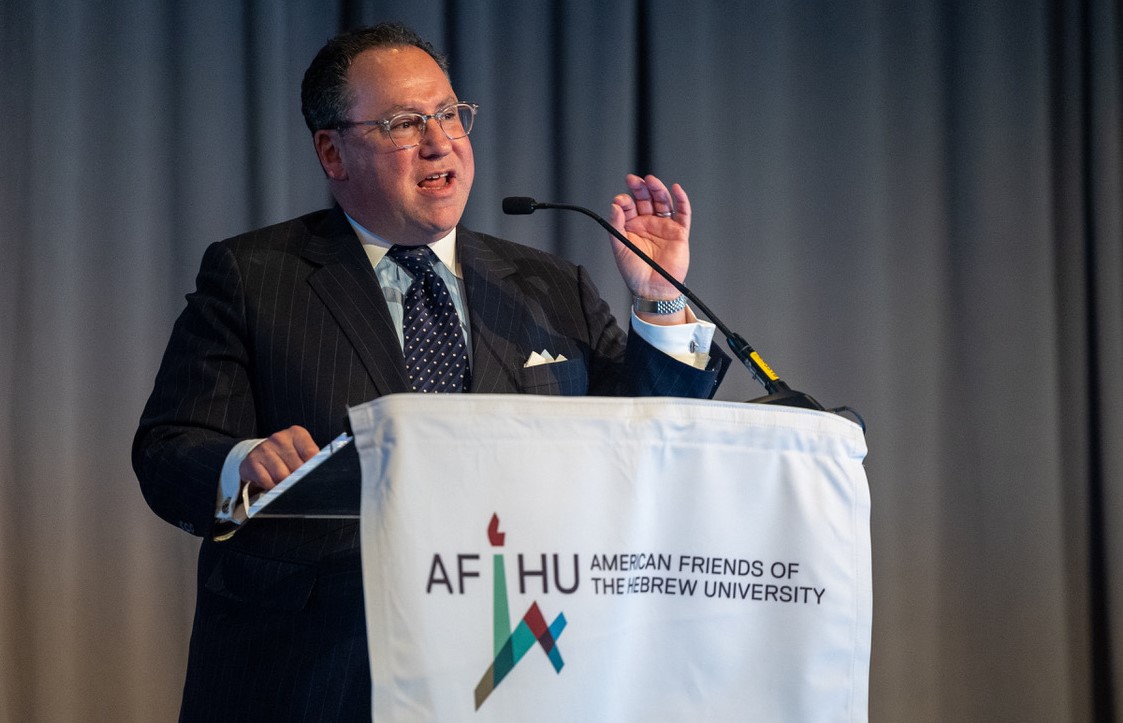 Republican Jewish Coalition executive director Matt Brooks, one of the event’s award winners, spoke to the audience at the Four Seasons Hotel in the Georgetown neighborhood of Washington, D.C., who were gathered for the American Friends of the Hebrew University annual SCOPUS Award Gala on April 28, 2022. Photo by Nathan Posner.

He also spoke about the major differences between him and Brooks, saying their opinions on American and Israeli politics couldn’t be more different.

“We probably never voted for the same candidate for any office; indeed, we’ve consistently worked to elect candidates who oppose each other,” he said.

“What divides us is vast. But what unites us is no less profound and important. We both love the Jewish people and the State of Israel; we support a strong U.S.-Israel relationship; and we are—each in our different ways—prepared to fight for America’s pro-Israel stance through our community’s and our country’s political process.”

Brooks followed Rednik’s reading of Mellman’s speech in person on stage, cheered by the majority of the night’s attendees who came to the event as a continuation of their leadership meeting.

Reading a list of comedians and actors who have received the award, including Johnny Carson, Frank Sinatra, Bob Hope and Billy Crystal, he joked that he concluded that someone at Hebrew University confused him with Mel Brooks.

He recalled how during a visit to Israel with the RJC 20 years ago, he was taken to a site of a recent suicide attack in a cafeteria of Hebrew University where nine people were killed—five of them Americans—and 100 more were wounded.

“One image that I would like to leave you with, one image that is seared indelibly in my mind,” he said: “Imagine a single white sneaker, still tied, soaked with blood on the floor of the cafeteria, surrounded by metal fragments intended to shred the human body. The smell of explosives still hung in the air.”

That, he said, came instantly to his mind when he was told he would be receiving the SCOPUS award.

“I’ll never know to whom that shoe belonged, but I think tonight of that young man or woman, and I remember you. And I’m here tonight because of you,” said Brooks.

“It’s hard for any of us to try to imagine what the Middle East looks like five or 10 years from now, but the fact that this is possible, the fact that this is happening, means it is changing. We just don’t know how fast or how far it’s going to change.” — UAE Ambassador to the United States Yousef Al Otaiba

But now, he was accepting an award on the same stage where moments before the ambassadors of Israel and the United Arab Emirates sat for a panel discussion.

“Twenty years ago, while standing amongst the carnage of the Hebrew University attack, I can never have predicted seeing what we saw on the stage tonight,” he said. “I’d call it a miracle if I didn’t know how much hard work it took to produce the diplomatic breakthrough that led to these gentlemen being together on the stage here tonight.”

Brooks said that he was touched by Mellman’s kind words about him, calling him a “mensch of mensches.”

“I have been proud to know, and work with and compete against Mark for many, many years and I’ve always, always been impressed by his willingness to work across party lines for shared values,” he said. “I think it’s interesting, that it’s oftentimes tougher in D.C. to get Republicans and Democrats to stand together than it has been to have Arabs and Israelis come together.”

The audience was surprised by a short, videotaped address by former President George W. Bush, who congratulated both award winners and received a spirited ovation from those in attendance.

Brooks said he was honored by the president’s words.

“Even President Bush’s harshest critics now have come to respect his humanity and his decency, and we who have followed and admired him over the years can take pride that now the qualities that we saw all along in this great president are now appreciated by all Americans of goodwill,” he said.

Spera said that unlike other posthumous awards that were given to Ginsburg, she knew that the Hebrew University was going to give her an honorary degree, having been told in May 2020.

“And she was absolutely thrilled at the news,” said Spera. “She had hoped to be with you all at the celebration this evening.” 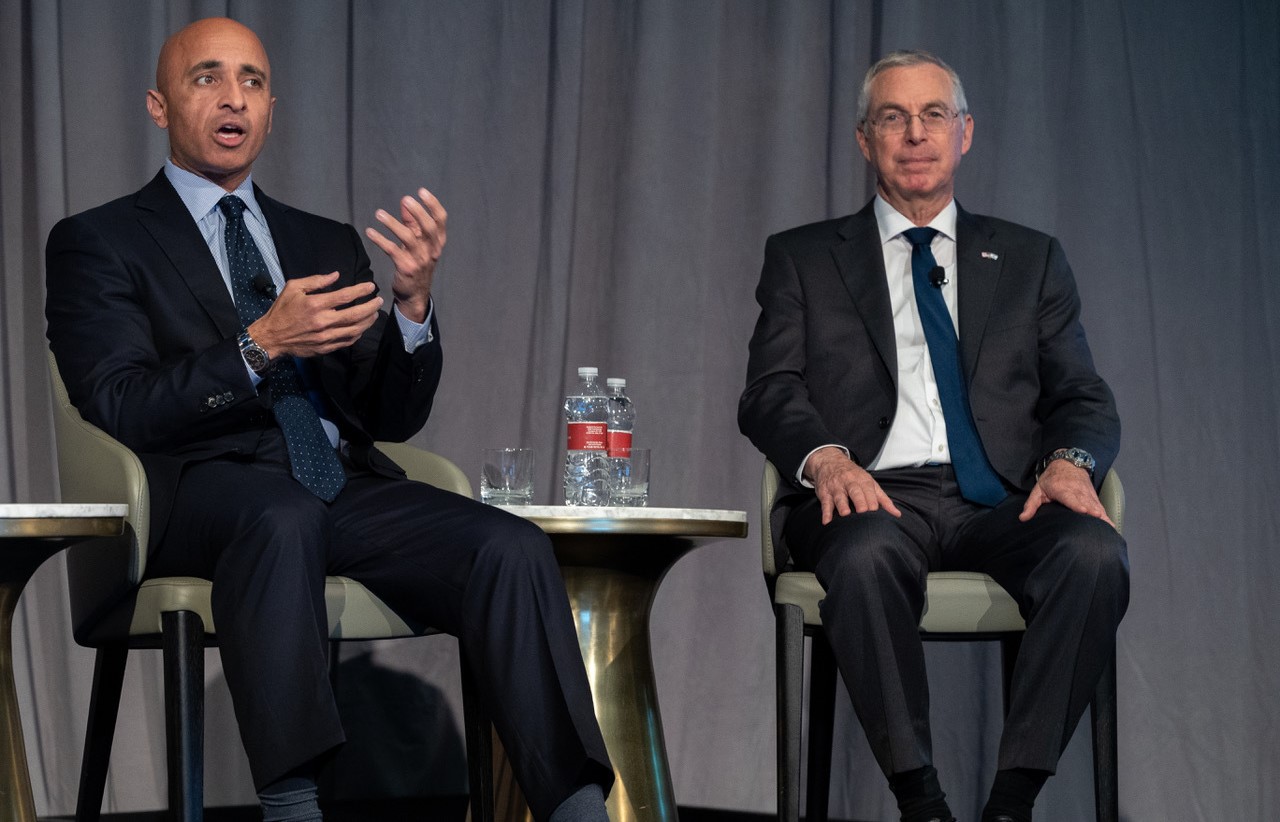 ‘The relationships that exist are successful’

Al Otaiba said that a year-and-a-half ago, it was difficult to imagine something similar to the event happening, having the ambassadors in the same room at an event hosted by a Jewish university on Yom Hashoah, Holocaust Remembrance Day.

He and Herzog spoke about the already deepening trade relations between the UAE and Israel, and collaboration in the economic and scientific spheres, including a just signed free-trade agreement between the two nations.

“If you asked me a week after the Abraham Accords were signed, ‘Would it be possible?’ I would have told you it would take at least a few years,” he said.

Al Otaiba said since the Abraham Accords signing, the UAE has a lot to show for it, and he’s very optimistic they’re heading in the right direction, faster than expected.

Herzog agreed, saying improving relationships is bettering the well-being of the population and offering them a better future.

Trade continues to grow, said Herzog, and dozens of agreements have been signed within the government and private sectors. He called this the results of a “warm peace” as opposed to the “cold peace” Israel has had with Jordan and Egypt for years.

He said that he would like to see more countries added to the accords, the most significant of which would be Saudi Arabia, which plays an important role in the Muslim world, as well as other Muslim nations without a relationship with Israel.

Al Otaiba agreed, saying that he is often asked about which country he thinks will join the accords next and how soon.