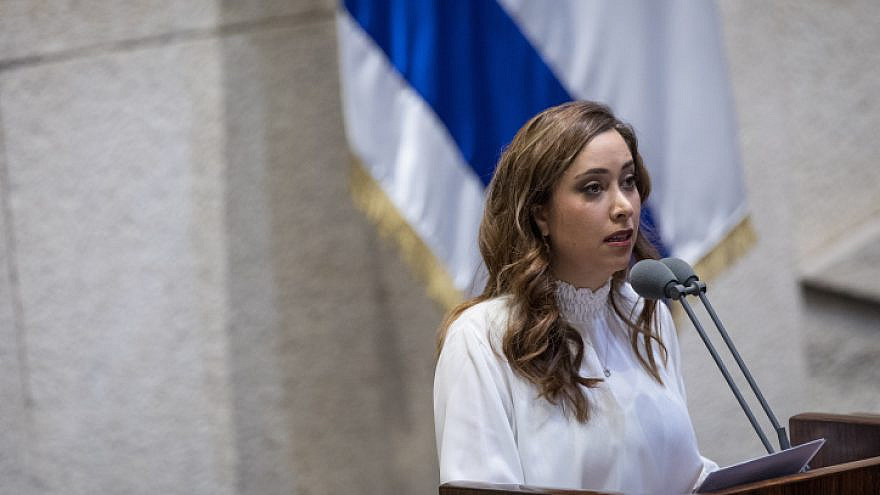 Likud Party lawmaker May Golan speaks for the first time at the Plenary Hall at the Knesset in Jerusalem on May 14, 2019. Photo by Hadas Parush/Flash90.
Spread the word.
Help JNS grow!
Share now:

(June 7, 2021 / Israel Hayom) A Likud lawmaker on Sunday compared the leaders of Israel’s Yamina and New Hope parties to suicide bombers, saying that the fact they had burned their political bridges in the effort to oust Israeli Prime Minister Benjamin Netanyahu made them “dangerous.”

When the presenters interjected to ask whether she didn’t think the comparison went too far, Golan insisted it did not.

“I am comparing them in this way—despite the obvious vast difference—because they are like terrorists who no longer believe in anything, embark on that suicide mission and, even if they know they face a death sentence, it doesn’t interest them,” she said.

When the presenters asked Golan to take back her remarks, she refused and doubled down.

“I will not take it back,” she said, adding that “they have decided to die with the Philistines,” a reference to the biblical story of Samson.

“They are on a suicide mission, and they don’t care what happens in the end. They want to commit suicide. They know they have nowhere to go back to. That’s what Bennett and Gideon Sa’ar are doing, and these are the people we are putting at the head of our state today. I won’t take these words back,” she said.