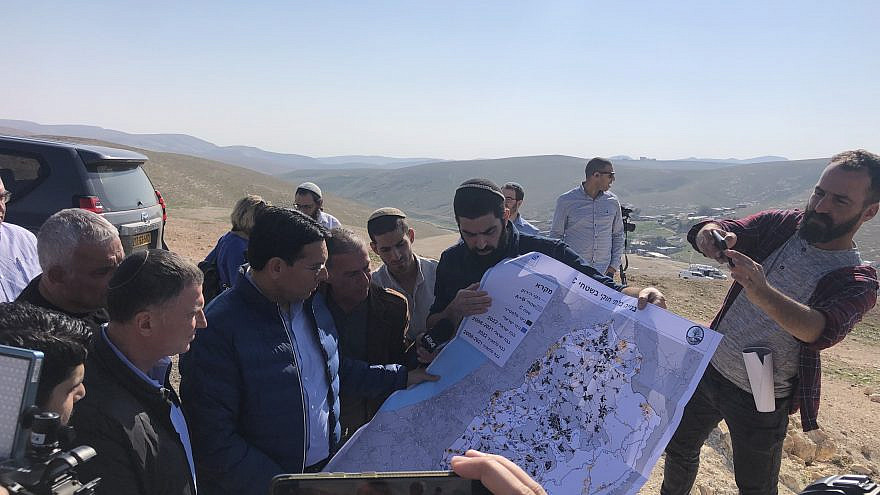 The gathering, which included a press conference, was also attended by Likud MK Yuli Edelstein, the chairman of the Foreign Affairs and Defense Committee, and comes ahead of the Feb. 1 deadline set by the Supreme Court for the government to disclose its plans for demolishing the illegal community.

Also present were members of the Regavim organization, which filed the original petition against Khan al-Ahmar in court back in 2009 and has been at the forefront of the struggle under subsequent governments to have the illegal enclave relocated to an approved site.

According to Regavim there are more than 170 illegal outposts in Area C of Judea and Samaria, created by the Palestinian Authority and funded by the European Union.

Danon said during the briefing that “when it comes to illegal building in Judea and Samaria, there can’t be double standards. We saw what happened last Friday when the authorities evacuated a Jewish community that was built illegally, but look what’s happening here. You have an illegal Palestinian community that is not being evacuated despite the ruling of the Supreme Court. We are calling on the prime minister of Israel to say clearly to the Supreme Court that this illegal settlement will be evacuated as soon as possible.”

Danon added that “with all due respect to the international community and to the European Union, we have the rule of law in Israel, and it applies to Jewish communities but also to Palestinian communities.” 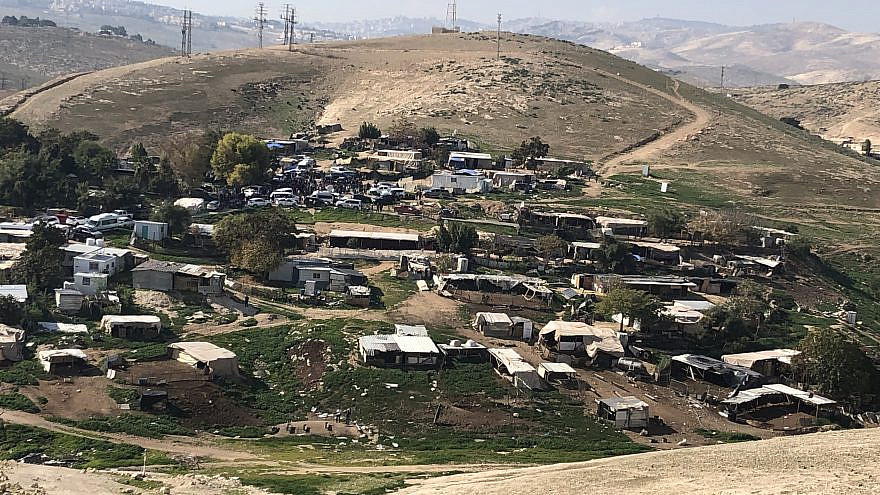 According to Edelstein, more than 5,000 cases of illegal construction were registered in Area C over the past year.

“An example of this kind of behavior on the part of the Palestinians is right behind us. Khan al-Ahmar was established over 10 years ago, with illegal building on this piece of land. The moment the Israeli government was hesitant and allowed illegal construction here, the message was sent throughout Judea and Samaria [that this would be tolerated],” he continued.

Edelstein emphasized that there was no legal barrier to relocating the encampment.

“The Israeli government has all the necessary approvals including from the Supreme Court to take action here. It’s not just about Khan al-Ahmar, it’s about the future of Judea and Samaria, the future of Area C, and the future of our ability to implement rule of law,” he said.

When asked about the possible international backlash should Israel carry out the demolition of Khan al-Ahmar in the coming days, Edelstein said, “I want to remind you that there were warnings of World War III if the Americans moved the [U.S.] embassy to Jerusalem. That didn’t happen. So I think that there is always pressure and threats.”

He went on to call out the E.U. governments for their financing of illegal construction in unrecognized Arab communities in Area C, adding, “This is our country, and the government and Knesset will decide [what’s best]. I sincerely hope the government does the right thing. Actions speak louder than words.”

Guy Ifrach, deputy mayor of the nearby city of Ma’ale Adumim, told JNS that he is optimistic the government will take action at this juncture.

“We finally have a full-fledged right-wing government. Removing Khan al-Ahmar is correct from a legal and national perspective, and is just. I believe the government has the strength to do the right thing and take it down,” he said.

At the same time, Boaz Ido, an olive farmer from the nearby community of Alon, said that moving the Bedouin into the legal neighborhood earmarked for them close to the Abu Dis village, in Area B of Judea and Samaria, near Jerusalem, would be a “win-win” for Israel and for the residents themselves.

“There are legal plots set up near Abu Dis with the necessary infrastructure for these people already in place. At the same time, it’s a win for the State of Israel, because Highway 1 won’t be endangered and under threat from this village,” he said. 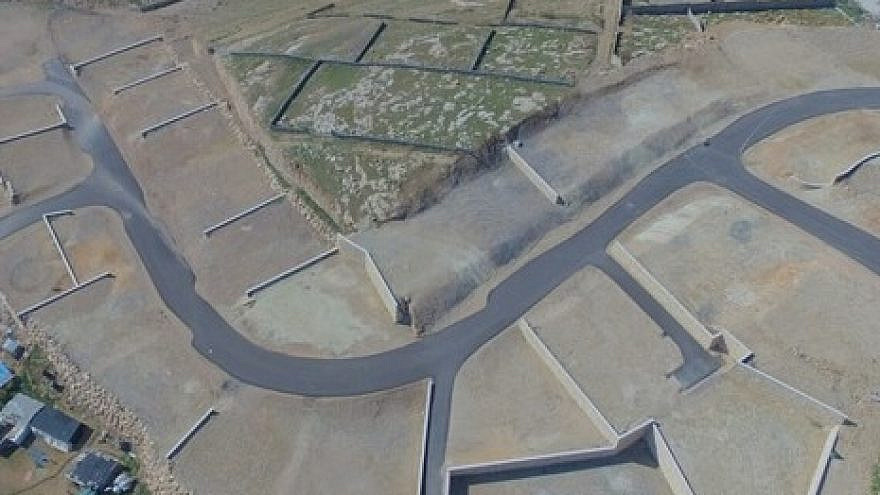 The site in Area B of Judea and Samaria, near Jerusalem, earmarked for the Bedouin community of Khan al-Amar. Photo by Regavim.

Ido noted that the school in Khan al-Ahmar was a hotbed of anti-Israel hate and incitement to terrorist violence against the Jewish state.

Moreover, according to Regavim, the encampment has become the symbol of former P.A. Prime Minister Salam Fayyad’s published 2009 doctrine, which calls on P.A. Arabs to establish “facts on the ground” in strategic locations throughout Area C, with the goal of unilaterally annexing those areas in lieu of negotiations with Israel.

A statement issued by the organization in conjunction with Monday’s visit said, “A group of Likud MKs came out to see Khan al-Ahmar, to understand why it is the flagship of the P.A.’s annexation project, and to learn about the ridiculous and dangerous ‘alternative’ cooked up by [former Defense Minister] Benny Gantz—a far worse alternative than the present situation.”

The site earmarked by Gantz for the relocation was just 300 meters away from the encampment’s current location, according to Regavim. 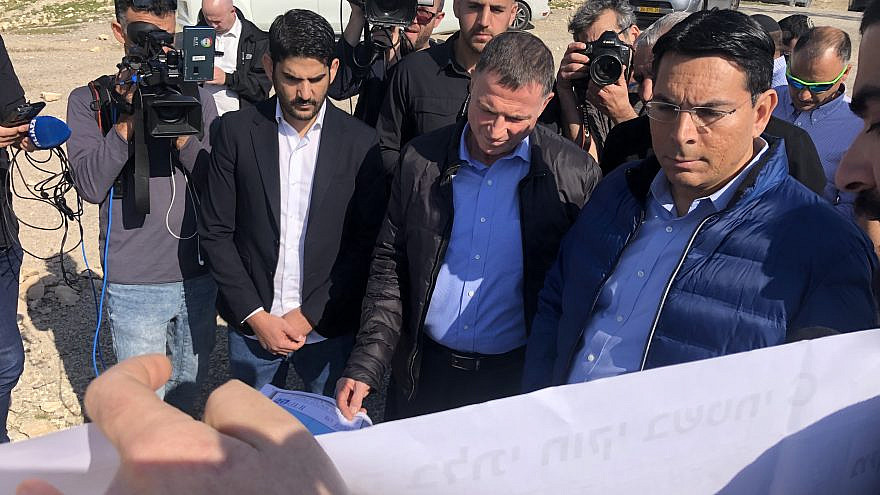 MK Yuli Edelstein (center) and MK Danny Danon (right) lead a delegation to the illegal Bedouin encampment of Khan al-Amar on Highway 1 between Jerusalem and the Dead Sea, Jan 23, 2023. Photo by Josh Hasten.

“This relocation option would legalize the first P.A. foothold, but certainly not the last. There are more than 80 ‘Khan al-Ahmars’ in the E1 region [between Jerusalem and Ma’ale Adumim] with no less or more basis for legalization than this one,” the statement continued.

This despite the fact that the state has already invested some 80 million shekels ($23.7 million) in the site outside Abu Dis, “where it has prepared infrastructure, roads, electricity, water, sewage, a health clinic and school—on state land,” the statement concluded.