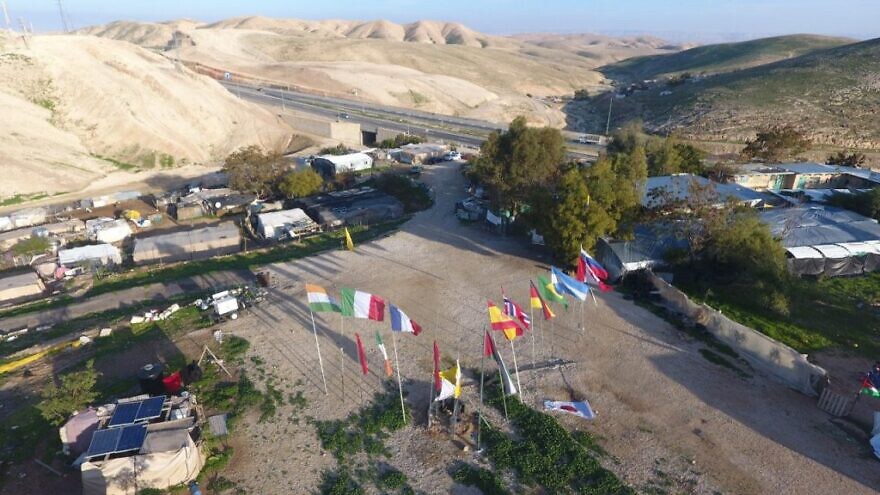 (November 9, 2022 / JNS) Arab expansion into land in Judea and Samaria is far outpacing Israeli growth in the area, according to a report by the Israeli NGO Regavim.

“In the past year, the rate of illegal Palestinian construction has increased by 80%,” the researchers wrote.

So far in 2022, Palestinians built 5,535 illegal structures in Area C, which was placed under full Israeli control by the Oslo Accords. In contrast, illegal Israeli construction in Judea and Samaria amounted to 406 structures in 2022.

Over the past 20 years, illegal construction by Israelis totaled a mere 4,382 structures, fewer than what Palestinians built in the past year alone.

“While the E.U. and P.A. make a conscious effort to illegally take over as much land as possible, Israel places artificial and unnecessary restrictions on Jewish settlement, encouraging high-density housing and closely packed towns with ghetto-like fences,” says Eugene Kontorovich, director of the Center for the Middle East and International Law at the Antonin Scalia Law School at George Mason University. “One side is trying to spread out, while the other is trying to take up as little space as possible.”

Regavim’s report notes that illegal Palestinian construction is facilitated by legal support from the European Union.

Such legal aid was provided to more than 2,000 households, with 97.6% of those served with eviction or demolition orders still in the illegal structures, and 94% of the 1,569 structures that were illegally provided by the E.U. still standing.

Kahn said Israel should concentrate on building up the parts of Area C where the Palestinian Authority is focusing its efforts: the Jordan Valley (because it is on the border with Jordan; the E1 corridor (because it provides control of the north/south and east/west axes, and Palestinian control of it would cut Jerusalem off the eastern border; Gush Etzion (because its strategic high ground protects Jerusalem; and the South Hebron Hills (because the area links Judea with the Negev.

According to Kahn, the P.A. sees the bigger picture and is “annexing the land along major traffic arteries that serve Israeli security and settlement needs.”

Efraim Inbar, president of the Jerusalem Institute for Strategy and Security (JISS), told JNS “the IDF prefers quiet even if it means overlooking the facts on the ground created by the Palestinians. Additionally, the Israeli government has yet to devise a map of what places are important to build.”

Kahn concurred, saying, “The Civil Administration is an arm of the IDF, and as such is ill-equipped to handle civil matters effectively. As a military outfit, the Civil Administration prioritizes keeping the lid on the situation rather than planning for the future, formulating a vision for land use, protecting natural resources and facilitating population growth.”

According to Kahn, “Israeli governments have been held hostage by allies and enemies alike, threatening it with crushing sanctions if Israel dares to uphold its rights under international law.” At the same time, she said, “Israeli politicians have not learned the lessons of the failed Oslo ‘peace’ process, and still believe that Israel has a willing peace partner amongst the Palestinian leadership.”

International pressure against Israeli development of Area C has hamstrung Israel, according to Emmanuel Navon, a senior fellow at JISS and the Kohelet Policy Forum.

“One of Israel’s worst diplomatic setbacks in recent years was the passing in Dec. 2016 of U.N. Security Council Resolution 2334, which rejects the legality and legitimacy of any Israeli presence beyond the 1949 armistice lines,” he explained. In contrast, he said, Security Council Resolution 242, adopted after the 1967 Six-Day War, “left room for territorial changes.”

Kontorovich suggested that Israel should be more aggressive.

“Europe’s funding of naked violations of the Oslo Accords and Israeli law must be met with clear diplomatic consequences, not impunity,” he said.

Kahn echoed this, saying, “Diplomatic representatives of governments that continue to provide support for illegal activity should be informed that they are personae non grata and promptly disinvited from Israel and all territories under Israeli jurisdiction,” she asserted. “All funds transferred by foreign entities to support illegal activity should either be interdicted (since Israeli banks are used to transfer these funds) or garnered from the monies Israel collects for the P.A. and transfers regularly—sums in the billions that are used for illegal construction, support for terrorists and their families, lawfare against Israeli law enforcement, pro-BDS activity, anti-Semitic education and more.”