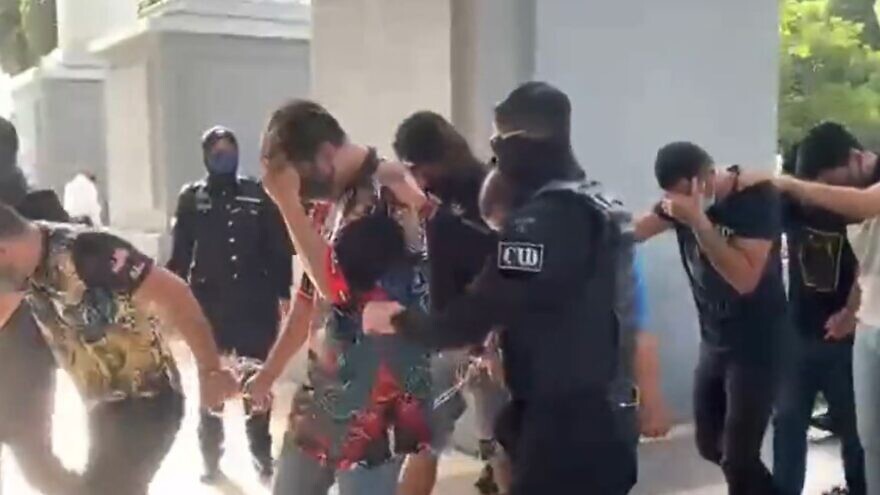 (October 18, 2022 / JNS) Malaysian police say they rescued a Palestinian man captured by a group of locals who had been engaged by the Mossad.

A group of men, the alleged kidnappers, shackled and in single file, were paraded before the cameras as authorities brought them to the Kuala Lumpur Magistrate’s Court on Oct. 14.

They stand accused of kidnapping a Palestinian on behalf of the Mossad because the latter believes him to be an asset of Hamas’ “armed wing,” the Izz ad-Din al-Qassam Brigades.

The alleged kidnapping supposedly took place shortly after 10 pm on Sept. 28, when two Palestinian men, both computer programmers, were about to enter their car after eating dinner at a mall in the middle of Kuala Lumpur.

The alleged victim was dragged away while being beaten and placed in another vehicle, which sped off. He was taken to a chalet “in a quiet corner of the district,” according to the New Straits Times newspaper.

Meanwhile, the second Palestinian ran to a nearby hotel to seek help. He lodged a report at the Dang Wangi police station roughly 40 minutes after the incident, the Malaysian paper reported.

The suspected terrorist asset was interrogated and beaten for 24 hours, according to the report.

“The Israelis wanted to know about his experience in computer application development, Hamas’ strength in developing software, members of the Al-Qassam Brigade that he knew and their strengths,” according to one of the alleged Malaysian kidnappers, the report said.

Police traced the route of the vehicle and arrived at the chalet, freeing the Palestinian. The interrogation was ongoing as they raided the room, according to the newspaper.