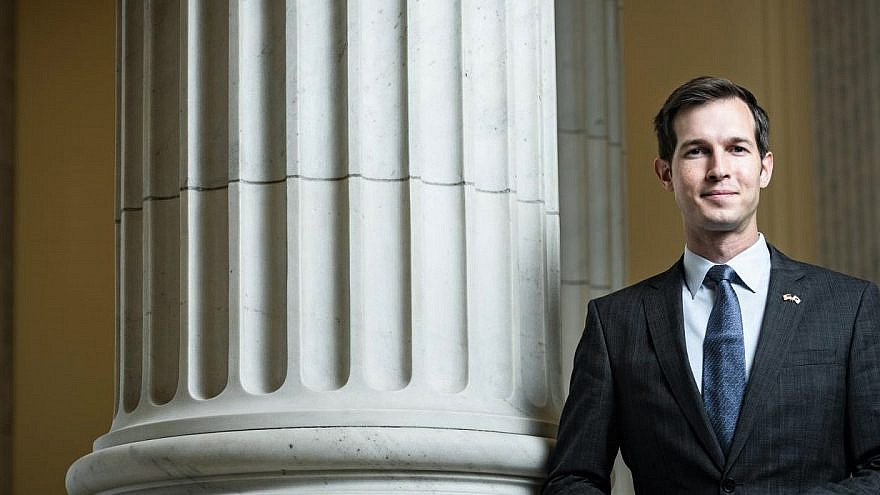 (January 29, 2021 / JNS) With 61 percent of the vote, Democrat Jake Auchincloss easily won his election in the Nov. 3 race for U.S. House of Representatives in Massachusetts’s Fourth Congressional District to succeed Democratic Rep. Joe Kennedy III, who unsuccessfully ran for senator.

Having been sworn in on Jan. 3, Auchincloss, along with two fellow freshmen Democrats, joined the 35 Jewish members of Congress.

Before serving in Congress, he served for five years in the U.S. Marine Corps and for six years in the Newton City Council.

JNS talked with Auchincloss by phone on Jan. 21. The interview has been edited for brevity and clarity.

A: I have always been a strong supporter of the U.S.-Israel relationship. It’s an alliance not just of just strategic value and economic empowerment, but also an alliance of conviction based on shared values and shared interests. I grew up in the Jewish faith. My grandfather was the son of refugees from the Russian pogroms who enlisted in the Marine Corps in World War II. He really conveyed to me a deep reverence for the story of the Jewish people and the importance of having a homeland. As a marine who has served overseas in Afghanistan and was able to see firsthand that Israel occupies a dangerous neighborhood while wanting to engage peaceably with all states, Israel needs to have the support necessary to defend itself against existential threats on its borders every single day.

A: I represent one of the most civically and politically engaged districts relative to the U.S.-Israel relationship in the entire country. I’ve got the highest proportion of Jewish constituents of any district in New England, yet my constituents are deeply involved in the questions of the day involving the U.S.-Israel relationship, so I am acutely aware that this seat that I hold is one that needs to have a voice in the national conversation on the United States-Israel relationship. And my voice on that question’s going to be one that is unreservedly and powerfully supportive of unconditional military aid to Israel, Jerusalem as the capital of Israel, of fierce opposition to BDS whether on college campuses or in European capitals, as that is an anti-Zionist, deeply destructive set of policies.

A: I’ve been to Israel once. In high school, I dated a young woman who was half-Israeli, and she and I and her father, who was born on a kibbutz, toured Israel for two weeks together. I am very much looking forward to going again as soon as possible on a trip with AIPAC or with any other sponsor.

Q: What is your reaction to U.S. President Joe Biden’s statements that he re-enter America into the 2015 Iran nuclear deal if the regime returns to compliance?

A: The Abraham Accords, and the economic and political events of the last five years, have changed the dynamics vis-à-vis the United States and Iran, and Iran and Israel. I want to see a stronger and longer version of a Joint Comprehensive Plan of Action (JCPOA).

Q: Just to clarify, do you agree with the president’s stance that America can return to the JCPOA if Iran returns to compliance, or do there need to be more steps taken by Iran in order for the United States to return?

A: Critical provisions are sunsetting as we speak, so it is not really the right question as to what is a deal that can be negotiated going forward that involves all parties for the 2020s. It’s got to be a stronger and longer version of the JCPOA as it currently exists.

Q: What more needs to be part of such a deal?

A: A couple of critical elements would be the ballistic-missile program in Iran. It presents nearly the same existential threat to Israel as its nuclear program does. And then Iranian funding of proxy forces that have destabilized the region and contributed to attacks on Israel.

A: It’s being fueled by elements of the far-right and of the far-left. We have BDS, which, if we are not careful, could infect the Democratic Party the same way that anti-Semitism has infected the Labour Party in Great Britain. We, of course, have domestic far-right terrorist groups that have intertwined anti-Semitism with conspiracy theorizing. Neither has frankly has aligned with much of what we’ve seen over the last several millennia. We as a Jewish people know that when people are scared, when people are looking for scapegoats, when people are misinformed by their leaders, it’s often these times when Jews are first in line to being tarred.

Q: On the far-right, there’s Rep. Marjorie Taylor Greene (R-Ga.). What are your feelings about her support for QAnon and trafficking in controversial, even bigoted, statements.

A: She is one of that cohort of cultists who are sowing lies and disinformation for political gain without regard for country or constitution.

Q: Do you plan to introduce any legislation relevant to the Jewish and pro-Israel community—for example, anti-BDS legislation, which some within your party says goes against the First Amendment?

Q: How do you respond to critics, including those within your own party, who say that such a measure goes against the First Amendment?

A: It’s just not accurate. Anti-BDS legislation is about commercial activities, not about people’s ability to speak. People are free to criticize Israel; that is a protected right. But organized boycotting and divestment with the support of state, local or federal government is not acceptable.

Q: What is your stance on the United States possibly resuming certain assistance to the Palestinians in accordance with the Taylor Force Act?

A: I think humanitarian aid to the Palestinians, especially during the pandemic, is appropriate. We would want [them] to be economically successful. We want those people to thrive, and humanitarian aid to those in need is usually in the best interests of both of those receiving and the United States.

Q: You served in Afghanistan. What’s your stance on the U.S. military presence in that country? Do you agree with withdrawing troops from there in addition to Syria and Iraq?

A: We need to end the forever wars. The deal that we signed with the Taliban is worse probably than the deal we could’ve signed six weeks after 9/11. It is a failure of American foreign policy. We have got to do so in a way that does not destabilize the security status in either of those countries, such that we are creating more problems than have to be solved down the line. But it’s time to end these wars.