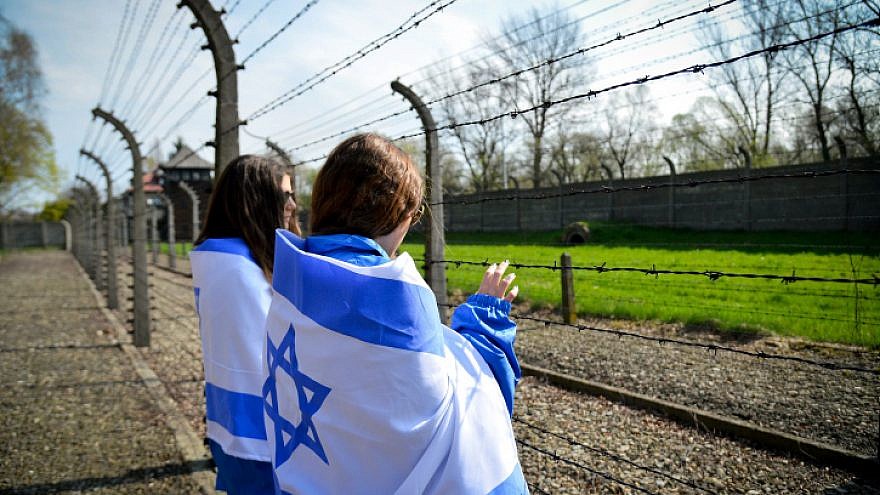 Jewish youth from all over the world participating in the “March of the Living” at the Auschwitz-Birkenau camp site in Poland, as Israel marks annual Holocaust Memorial Day on April 16, 2015. Photo by Yossi Zeliger/Flash90.
Spread the word.
Help JNS grow!
Share now:

(January 5, 2022 / JNS) A Massachusetts-based Jewish group is offering a $2,000 scholarship for local Jewish high school juniors and seniors who qualify for an upcoming March of the Living visit to Israel and Poland in an effort to promote Holocaust education.

The trip, part of the scholarship initiative organized by New England Friends of March of the Living, will take place from April 24 to May 8.

Already 10,000 teens from 50 countries have gone on the annual March of the Living educational trips, which director of teen programming Aaron Kischel calls “life-changing.”

Kischel notes that “students with Holocaust education are more likely to stand up to negative stereotyping and challenge incorrect, biased information. Education is the best way to prevent ignorance and hate.”

A 2020 survey conducted across the U.S. revealed that 63 percent of millennials and Generation Z didn’t know that 6 million Jews were killed during World War II and the Holocaust, and 36 percent believed that 2 million Jews or fewer were killed. In addition, 48 percent of respondents could not name a single Holocaust concentration camp or ghetto.

Deborah Lipstadt, a professor of modern Jewish history and Holocaust studies at Emory University who has been nominated to become the U.S. special envoy to monitor and combat anti-Semitism, said: “When we fail to actively remember the facts, we risk a situation where prejudice and anti-Semitism appear.”

Massachusetts Gov. Charlie Baker signed into law last month a bill that mandates middle schools and high schools in the state to teach students about the history of genocide, such as the Holocaust. School districts must also annually file a description of their lesson plan and programs for teaching about genocide with the state’s Department of Elementary and Secondary Education.

As part of the bill, a Genocide Education Trust Fund was created to support the development of genocide education and to provide professional training to teachers.