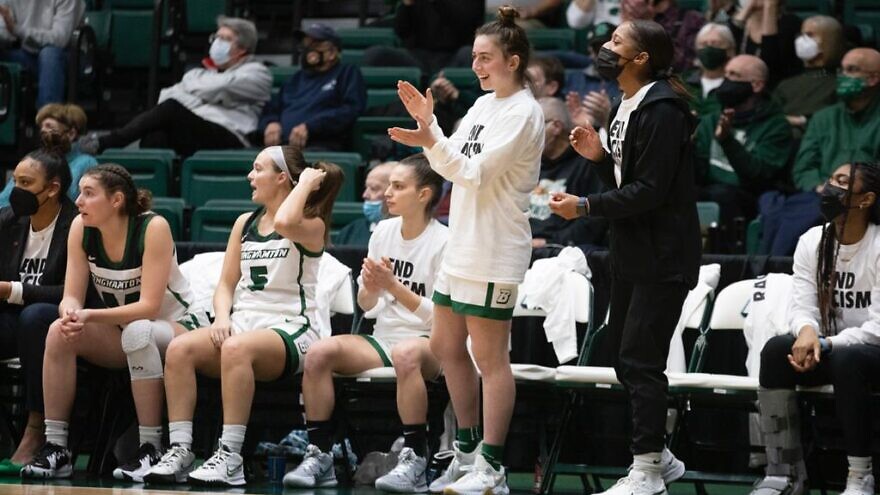 (April 1, 2022 / JNS) For Mia Raskin, basketball and Judaism are essential parts of life. Her deep and simultaneous commitment to her favorite sport and religion never came into conflict; at least, until Raskin began considering her college options.

For Raskin, observance of Shabbat and kashrut were non-negotiable, so playing college basketball seemed out of the question. That all changed when an unusual opportunity presented itself during her sophomore year at Binghamton University in New York. With creative thinking and fancy moves that would make an NBA or WNBA star proud, Raskin joined the Binghamton women’s basketball team in late December, traveled to 16 road games and continued to be a proudly observant Jew.

Mia Raskin grew up in Dallas and moved with her family in 2002 to Potomac, Md., when her father, Adam Raskin became the rabbi of Congregation Har Shalom. Raskin played basketball at every opportunity growing up. “I prioritized basketball almost over everything else,” she says. She played basketball year-round: at the (Orthodox) Melvin J. Berman Hebrew Academy in Rockville, Md., in an AAU (Amateur Athletic Union) league and at various summer programs.

“My parents bent over backwards. If my AAU game over Shabbat was even four miles away, we stayed in a hotel and walked,” she relates.

Raskin praises her parents for their support and understanding of both her commitment to basketball and her religious practice. “My father is a Conservative rabbi, and is so supportive of me staying observant. My mother, too—she raised us so that we never felt forced or coerced to be observant; it made me strong.”

By 10th grade, Raskin began to realize that playing basketball in college was unlikely. “I thought about playing, but also thought it was not possible because of being Shomer Shabbat. Ultimately, there were no college basketball programs flexible enough to accommodate my Shabbat observance, kashrut requirements and Jewish communal needs, so I decided collegiate basketball would not be in the cards for me.” 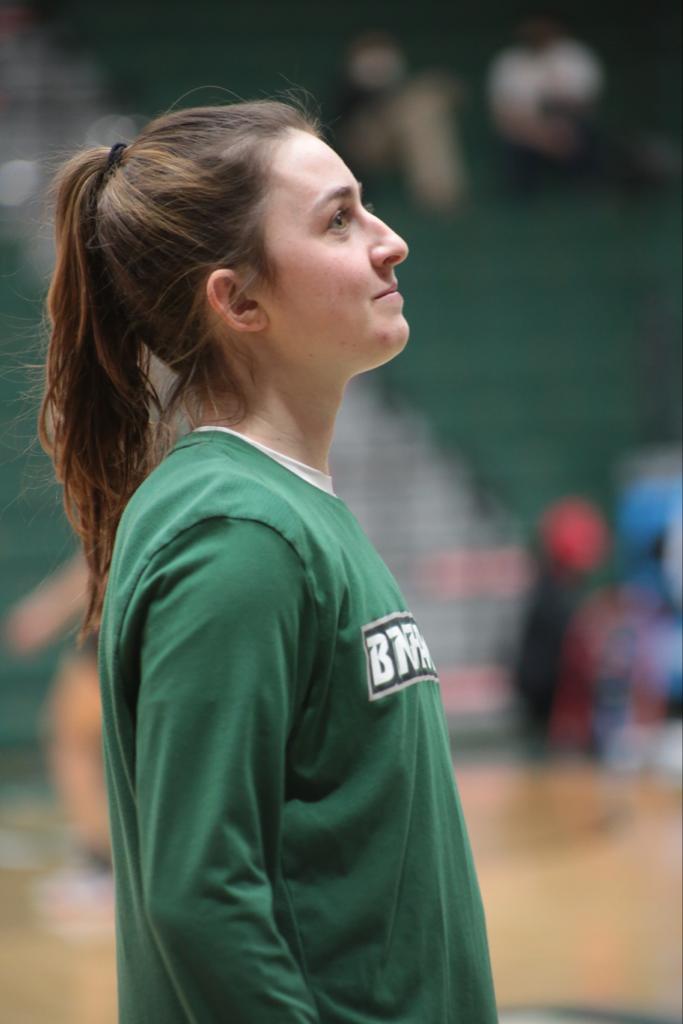 She graduated from Berman, spent a gap year learning at Midreshet Torah V’Avodah in Jerusalem and began attending Binghamton, where she is currently a sophomore majoring in marketing in the Binghamton University School of Management. Raskin serves as an officer in the Alpha Kappa Psi business professional fraternity. She is also actively involved in Jewish life on campus; she is a past student president of the Orthodox Union’s Jewish Learning Initiative on Campus (OU-JLIC), is a leader in the BU Zionist Organization, and is very involved at Chabad at Binghamton.

Raskin has also served as manager of the women’s basketball team, where she kept track of player statistics; tended to logistical issues of the gym and facilities; and assisted the coaching staff in practices and games. “I could not stay away from the game I loved,” she says. “Being in that position was rewarding.”

She would soon have an unusual opportunity to take on an even greater role with the team.

‘In the gym a big chunk of the day’

During the fall semester, Raskin noticed that a number of players were unable to play due to injuries or coronavirus precautions. At times, there were not enough players available for a 5-on-5 scrimmage. And so, Raskin mentioned her basketball playing background to head women’s basketball coach Bethann Shapiro Ord, who appreciated her offer to help but was not initially able to take her up on it.

While home on break, on Friday afternoon, Dec. 31, Ord called to offer Raskin an opportunity to join the team.

“You can only imagine my initial reaction to that phone call; I was ecstatic! I finally felt like I would be able to live out my basketball dreams,” says Raskin. Still, she knew that her religious observance would pose issues and require certain accommodations.

Raskin’s parents encouraged her to keep the explanations simple—note that kosher food wouldn’t be so difficult, and telling the coach and teammates that she is unable to use her phone or ride on the Sabbath would be sufficient initially. Raskin drove to Binghamton in the snow to join her teammates—admittedly a bit nervous about how she and her religious issues would be received.

“My mom was going to come up to visit me,” reports Raskin, noting that her apartment mates and most students were off-campus enjoying their semester break. “But a snowstorm hit, and she couldn’t come. I was pretty alone.”

As Raskin got to talking with her teammates in the locker room, the topic of Shabbat and kashrut came up, as did the fact that Raskin had “no one to do Shabbat with.” The teammates immediately replied, “We will come.”

Raskin invited her entire team to her apartment for a Shabbat dinner. “I made all of the food—dinner for 15—all of the classics … cholent, deli rolls, schnitzel, challah. It was really special how interested they were so early on.” She explains that she even prepared a Shabbat dinner “cheat sheet,” explaining Kiddush, hand-washing and hamotzi to her guests.

Their interest in and support for Raskin continued to grow. “Everyone asked questions daily to try to understand. It was cool,” says Raskin.

But she found ways to make it work, including walking home from the field house, often accompanied by teammates, on Shabbat. In all, she was able to join the team for 16 of 20 road games. “That’s 80%! The other four,” she says, “would have required riding on Shabbat.”

Raskin acknowledges underestimating how hard it would be finding nutritious kosher food on the road. “At first, I had lots of protein bars and fruit. Binghamton Chabad was very supportive. They reached out to other Chabads on the road. When Chabad centers at the University of Vermont, University of Albany and University of Hartford found out my story, they came to my support.”

And she discovered how time-consuming college sports can be. “We are in the gym a big chunk of the day—three to five hours.” She does feel that it has taken away from some of the Jewish activities she cherishes, such as daily prayer and study. But she notes, “I have a Gemara [Talmud] in my locker in case I have time to learn.”

‘Respected that I had to make compromises’

Raskin’s parents, her coach and the Binghamton Chabad community say they are proud of how Mia has been making it all work, in addition to her telling everyone right up front what her needs entailed.

“From the first conversation with the coach, she made it clear that Shabbat and kashrut were non-negotiable. But she was also willing to explore how she could make it work within these religious parameters,” say her parents, Rabbi Adam and Sari Raskin. “Along the way, she educated a lot of people—teammates, coaches, fans—about Judaism.”

Ord adds that “Mia was greatly appreciated by cutting her winter break short to come back to campus to help us out. I was so proud of how our team embraced her. It was a total learning experience for all. She gained an understanding of being a Division I athlete, and we gained knowledge of her Jewish observance. Mia came in every day with a great energy and attitude, and it was greatly appreciated.”

Rivkah Slonim, associate director at the Chabad Center for Jewish Student Life at Binghamton University, reports: “Mia is an inspiration—navigating her sports life while remaining steadfast in her commitment to Judaism. Mia has demonstrated the ability to live by principles. She works hard, plays hard and remembers, above all, who she is.”

Her being on the team has also helped drive attendance at Binghamton Bearcats women’s basketball games, which is admittedly small from the campus community. “There is a huge fan base, but it is more from the local community than from the school,” notes Raskin, who is quick to add, “the people who showed up from school were from the Jewish community—about 15 or 20 per game.”

In the end, Raskin did not see any playing time. But she’s not upset and has an amazingly positive attitude. “I go to live the dream—to work out with the team, to do free throws and lay ups, and come out when the team warm ups.”

She adds that the team “respected that I had to make compromises. There was mutual respect. I loved my time with the girls. They welcomed me with open arms.”

The season is now over, and Raskin will consider her options for next season. “I have no expectations of whether they want me to come back.”

She smiles, “I did get really cool sweatshirts. At the end of the day, it was worth it.”

For now, Raskin is enjoying watching the NCAA women’s basketball tournament, cheering for her favorite player (and non-Binghamton team). “I’m a big fan of Dawn Staley! South Carolina all the way!”