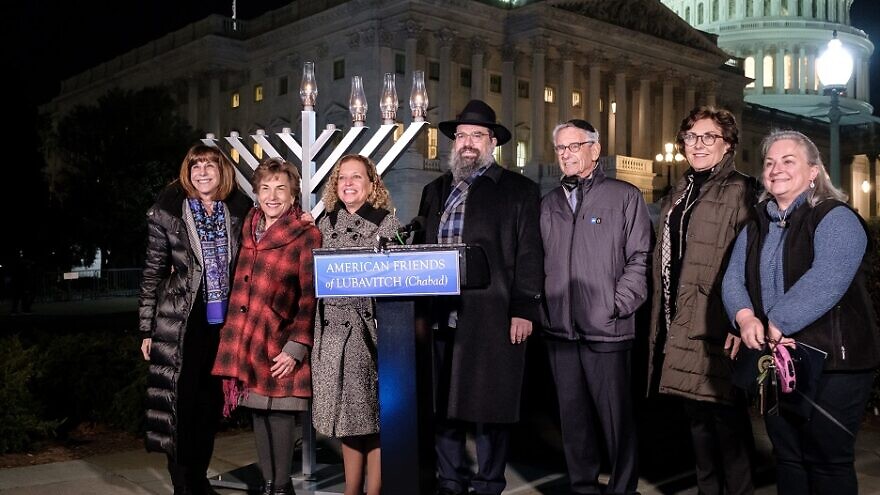 A menorah was set up on the House Triangle of the capitol grounds for the first outdoor lighting at the Capitol, organized by Rabbi Levi Shemtov, executive vice president of American Friends of Lubavitch (Chabad) and Rep. Debbie Wasserman Schultz (D-Fla.). Photo by Dmitriy Shapiro.
Republish this article
792 WORDS
Spread the word.
Help JNS grow!
Share now:

(December 2, 2021 / JNS) Hanukkah celebrations in the nation’s capital continued on Tuesday evening with a menorah-lighting next to the U.S. Capitol building followed by a virtual celebration led by Jewish lawmakers.

A menorah was set up on the House Triangle of the capitol grounds for first outdoor lighting at the Capitol, organized by Rabbi Levi Shemtov, executive vice president of American Friends of Lubavitch (Chabad) and Rep. Debbie Wasserman Schultz (D-Fla.).

Also in attendance were about a dozen of the lawmakers’ staff members.

“If there is ever a time in our recent history that we need more light and less heat, it is now,” said Wasserman Schultz, who was the first member to speak. “The scourge of anti-Semitism has burned hot. And it is so essential that we come together—not just as Jews, but as people, as human beings, as Americans—to beat back any hatred. Hatred against Jews, hatred against Muslims, bigotry and intolerance, and that’s what’s so important about this holiday.”

Wasserman Schultz praised Chabad for keeping the tradition at the capitol alive, remarking that you couldn’t walk far in her district without bumping into a Chabad House. She also praised Chabad’s openness to Jews of all observance levels.

Shemtov lit the shamash (the “helper” candle) and three candles of the menorah after she spoke while the lawmakers and staff sung the blessings.

Shemtov told those in attendance that Rosen and Sen. James Lankford (R-Okla.) partnered to create and co-chair a task force to combat anti-Semitism. Lankford considered being at the menorah-lighting but had to speak on the Senate floor when the ceremony was taking place.

“At this particular moment in time when we unfortunately are seeing a rise in anti-Semitism globally and sadly in our own country,” said Manning, “it’s fitting that we are standing here in front of the Capitol, which one of our leaders called the ‘Temple of Democracy,’ as we think about another temple so long ago. A temple that the Maccabees fought for at a time when they had to stand up and fight to be who they were, and celebrate their own religion and their own customs. And we are so blessed to be fortunate to do that in public right here in front of our Capitol.”

After the speeches, the Congress members mingled around the table full of latkes and jelly doughnuts with a few members taking some of Chabad’s tin menorahs for their offices and homes. 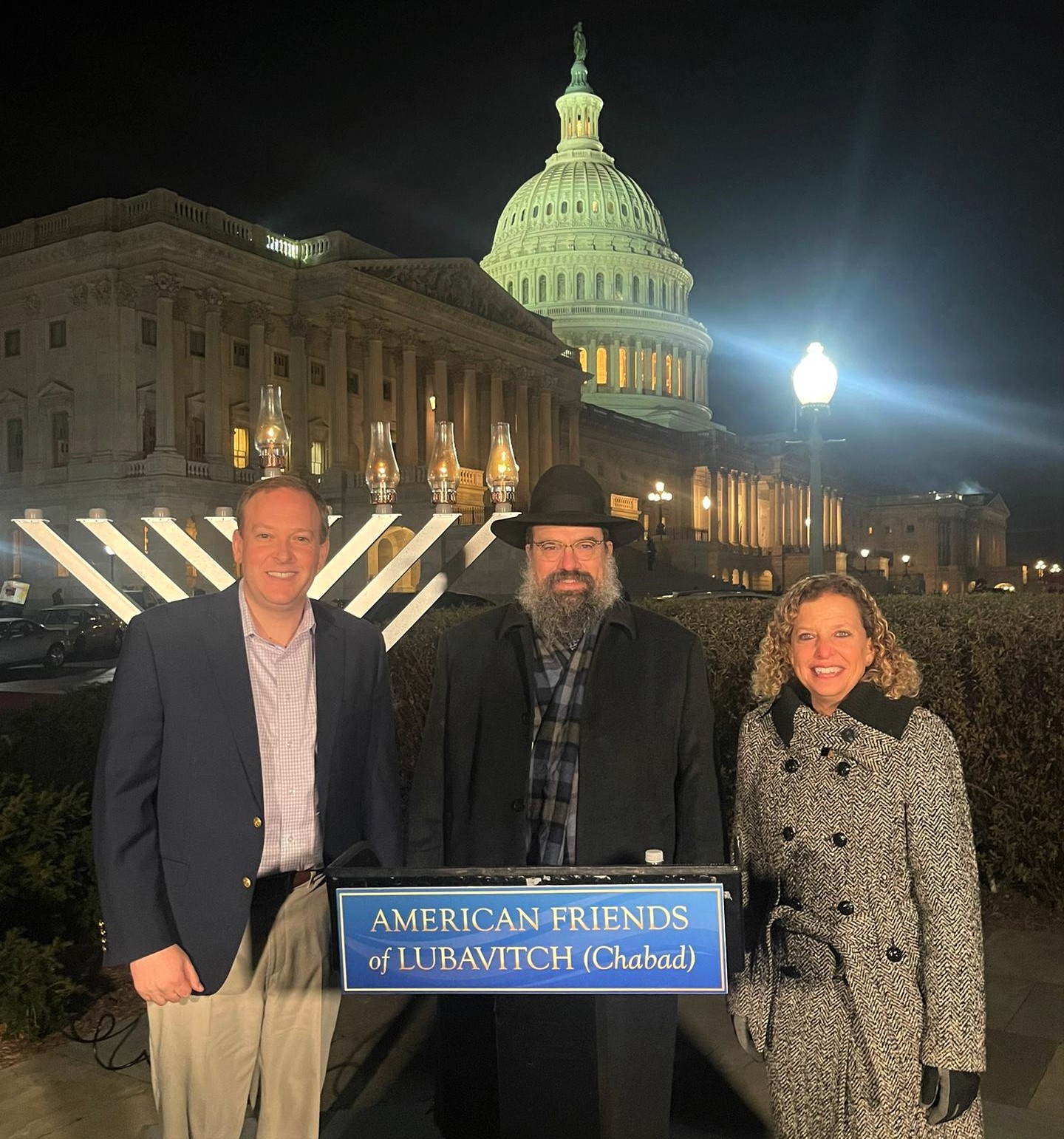 ‘Rededicate ourselves to bringing light to our nation’

One Republican, Rep. Lee Zeldin (R-N.Y.), and Democrats Reps. Ted Deutch (D-Fla.) and Lois Frankel (D-Fla.), planned to attend but had their flights back to Washington running late. Zeldin arrived after the ceremony to take photos and spend a few minutes speaking to Shemtov and Wasserman Schultz before both headed back into the Capitol.

Following the outdoor ceremony, Wasserman Schulz and Zeldin co-hosted a virtual Hanukkah celebration, continuing their annual bipartisan tradition that used to be held in the Members Room at the Library of Congress Thomas Jefferson Building, but made into a virtual event by the persistent COVID-19 pandemic, according to a news release.

“On this Hanukkah, let us use the energy of this holiday of miracles to rededicate ourselves to bringing light to our nation, even when it sometimes seems as improbable as one night’s worth of oil lasting eight times that long,” Wasserman Schultz said during her speech during the virtual event, according to the release. “On this Hanukkah, let us be reminded of the resiliency of the Jewish people and humankind.”

Approximately 150 guests joined the Zoom event and were treated to performances by the a capella group Six13 and JukeVox.