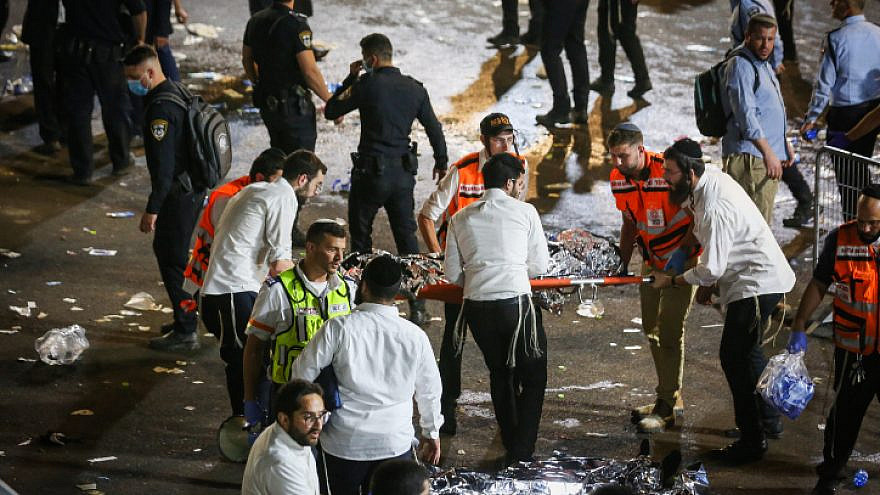 Israeli rescue forces and police at the scene after a mass fatality scene during celebrations of the Jewish holiday of Lag B’Omer in Meron, in northern Israel, on April 30, 2021. Photo by David Cohen/Flash90.
Republish this article
697 WORDS
Spread the word.
Help JNS grow!
Share now:

(April 30, 2021 / JNS) Israeli Prime Minister Benjamin Netanyahu declared a national day of mourning for Sunday over the disaster that took place at a massive Lag B’Omer gathering at the foot of Mount Meron on Friday morning.

Dozens of people were crushed to death in a stampede that broke out in the early hours on Friday, where more than 100,000 worshippers, mostly ultra-Orthodox Jews, had gathered to honor Rabbi Shimon Bar Yochai, a second-century sage and mystic who is buried nearby. At least 45 people were confirmed dead and 150 injured, with dozens in serious condition, several critically.

Visiting the scene on Friday morning, Netanyahu said, “The disaster at Mount Meron is one of the most difficult tragedy’s to strike Israel. We will conduct a thorough investigation to make sure this type of tragedy never happens again.

“Sunday will be a national day of mourning. Let us all come together and pray for the victims and their families and for the wounded’s speedy recovery,” he said.

It remains unclear the specific cause of the disaster, Magen David Adom said the tragedy was likely caused by overcrowding at a narrow pass at the prayer compound. A police official said dozens taking part in the service had “slipped” on a metal floor, falling on those around them and causing a crushing domino effect. 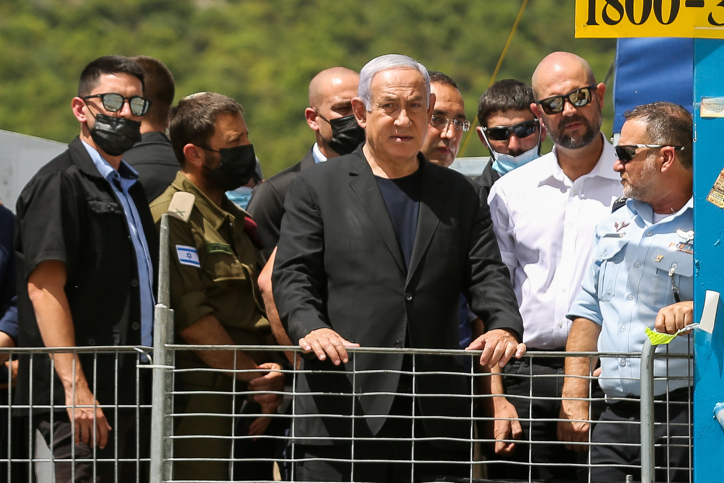 Organizers said by late Thursday, more than 100,000 people were at the site, and another 100,000 had been expected to arrive by Friday morning.

Police were deployed at the compound by the thousands and shut down the event, and were evacuating all the participants. Roadblocks were also set up to prevent people from arriving at the scene.

“Were emergency exits marked? Was the scene under control? All of this has to be reviewed.”

The event was one of the first major religious gatherings to be held after the coronavirus restrictions were lifted. Last year’s gathering had been canceled due to the pandemic.

Northern Police District Commander Maj. Gen. Shimon Lavie told local media that “as district chief, I bear full responsibility, for better or for worse. We are currently gathering information and evidence to get to the truth about what happened. I’m willing to face any investigation,” reported Israel Hayom.

Still, criticism grew in the immediate aftermath, with some saying the tragedy could have been prevented as the narrow, metal-floored walkway has for years been known a potential bottleneck on the compound.

“When it comes to an event in a specific area; when every police officer in the district knows every inch of the place, and there are specific orders on how to handle things, this cannot be the result,” said an officer.

A former top Northern District officer refused to absolve rabbis from partial responsibility for the events.

“The real bosses on the ground at Mount Meron are the Haredi leaders. They have the final say on who gets in or not. That’s insane. The power of each Hassidic dynasty is reflected in how things take place on the ground and the police tend to seek compromises with them.

“This is a case of failed management,” he continued. “They [the police] should never have allowed so many people into the compound. There are things that have to be verified: Were the plans for this event approved [by police brass]? What was the expected capacity? You have to stop letting people in when it’s met. Were emergency exits marked? Was the scene under control? All of this has to be reviewed,” he said.

On Friday, Attorney General Avichai Mendelblit ordered the Police Internal Investigations Department to review the incident for any criminal negligence on part of police officers at the scene. The decision followed eyewitness accounts that accused police of blocking a key exit route at the bottom of a walkway that had become a death trap.

Israel Hayom contributed to this report.