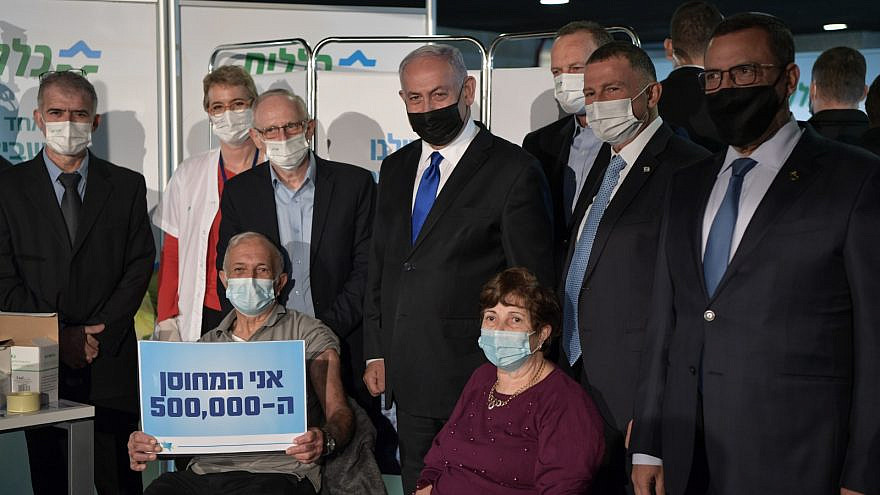 “It warms the heart to see the citizens of Israel joining in to help [one another], especially the elderly, emerge from great darkness into great light,” said Netanyahu, during a visit to the Clalit Health Services anti-coronavirus vaccination facility at the Pais Arena in Jerusalem.

Israel, said Netanyahu, was a world leader in both acquiring and administering the vaccines. “My mission now is to ensure that we will continue at this pace and we are working on it together,” he said.

According to the Oxford University-run site Our World in Data, Israel not only leads the world in per-capita vaccinations but does so by a margin that is growing daily. As of Dec. 29, Israel’s per capita figure was nearly twice that of Bahrain, the country with the next highest figure.

Netanyahu said that it was not only the speed that mattered but the choice of who gets vaccinated first.

“We aspire to quickly administer as many vaccines as possible, but first to take the at-risk population out of risk because most of the tragic mortality and most of the morbidity is concentrated there. Only thus will we be able to open the economy, help businesses and restore life to normal. This is our goal: to get life back on track as quickly as possible,” he said.

Israel, continued Netanyahu, is on track to perhaps be the first country in the world to emerge from the shadow of the pandemic.

Addressing Netanyahu, Health Minister Edelstein quipped that at the current pace, “in a few days, we’ll be inviting you to the millionth vaccination.”

“I visited several centers around the country yesterday and I saw the genuine joy of the people who were coming in to be vaccinated. They were smiling and hoping to see the light at the end of the tunnel and to return to a more normal life,” said Edelstein.

At the same time, he urged the public to remain strict about adhering to Health Ministry guidelines.

“Only this way will we be able to successfully conclude this amazing operation,” he said.

Israel began its third nationwide coronavirus lockdown on Sunday, due to a steep rise in the COVID-19 infection rate. The move, however, was not without controversy, even within the medical community.

The country’s Public Emergency Council for the Coronavirus Crisis, which is made up of medical experts and senior researchers, has called into question the data upon which the decision to implement the current lockdown was based.

In a letter to the Knesset’s Constitution, Law and Justice Committee, the experts wrote that this information “is riddled with ‘alternative facts’ and irrelevant data, which … can only be defined as irresponsible, partial and unprofessional.”

The missive was signed by more than 100 health specialists, among them Nobel Prize laureate Aaron Ciechanover, infectious-disease and immunology expert Zvi Bentoitch (a pioneer of AIDS treatment in Israel) and Emet Prize winner Zahava Solomon, an expert in psychiatric epidemiology and post-trauma.

Clalit Health Services chairman Yochanan Locker—who, along with Clalit CEO Ehud Davidson and Jerusalem Mayor Moshe Lion—called the vaccination campaign “the true answer” for the citizens of Israel, and expressed his gratitude to Netanyahu for the premier’s role in securing sufficient quantities of vaccine.

“We thank you and we thank the public for meeting this challenge,” said Locker. “I wish that by Passover, we will be in freedom and a new reality.”