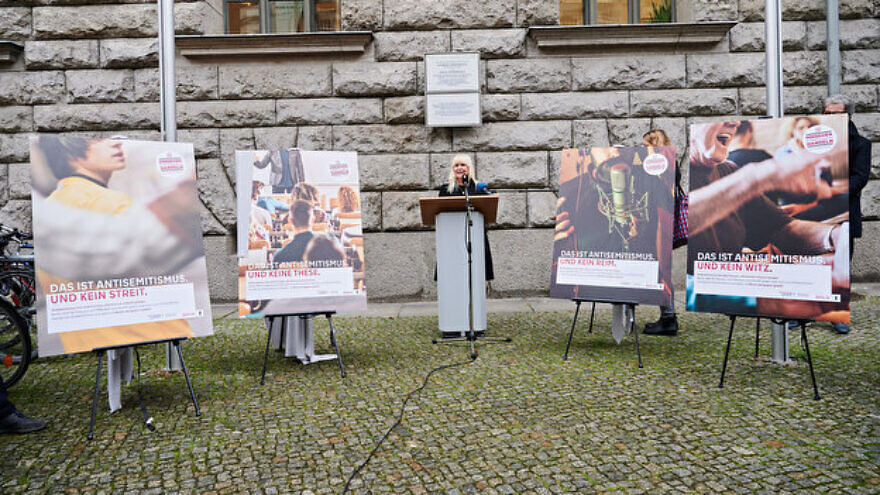 That’s the message from the city of Berlin, Germany, which is in the midst of a poster campaign meant to educate the public on how anti-Jewish jokes, conspiracy theories, off-the-cuff remarks and even artistic expressions in the public discourse are beyond the pale.

Back in October, the U.S. State Department teamed with the German government to bring in expert speakers on the subject of anti-Semitism and engage with a number of key German audiences, leaders and activists. It was an outgrowth of the State Department’s signing of an agreement with the German foreign ministry to promote Holocaust education as a high-priority, bilateral issue.

Among those speakers was Joel Rubin, executive director of the American Jewish Congress and a former State Department official.

“I met with the Berlin police’s anti-Semitism unit. They’re focused specifically on identifying acts against the Jewish community. I met with leaders in states like Saxony, which are now on the edge of teetering to being led by far-right politicians. Our government recognizes that Holocaust education is essential to democratic societies and fostering Democratic culture and, to its credit, the German government does as well, and they recognize we still have a long way to go,” Rubin told JNS.

“What was very clear is that Germany still has not come to terms with its identity as a country that led and facilitated the Holocaust, even though there have been massive amounts of education over the last six to seven decades—reparations to Israel, a country that rewrote its constitution and moved to a democracy. In Germany, there’s a debate now about what they call ‘memory culture.’ What is it that in their memory of the Holocaust in that era do they need to think about? What do they need to understand? There’s a deep uncertainty about how Germany grapples with this, and now with the far-right rising, there’s a real clash happening,” said Rubin. 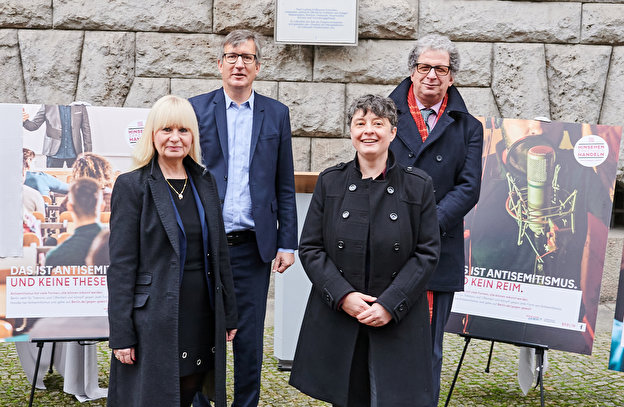 The posters, placed in strategic areas around the city, are meant to urge the Berlin public to “look, recognize, act.” The campaign includes four different poster designs, focusing the public’s attention on what exactly anti-Semitism is, in the hopes that citizens will be more aware of their own language and less inured to the anti-Semitic sentiments they are exposed to in everyday conversation.

Behind a supposed joke, the passive-aggressive intention is still hurtful, which is why the first poster bears the slogan: “This is antisemitism, not a joke.

The second poster, “This is antisemitism, not a thesis,” is intended to point out that clearly discriminatory statements should not be tolerated as opinions, including the many conspiracy theories circulating during the pandemic that include clearly anti-Semitic references.

Conflicts over different points of view are also unacceptable as a cloak for forms of violence,” which is the theme of the third poster: “That’s antisemitism, not a fight.”

The final poster, “This is antisemitism, not a rhyme,” is meant to clamp down on artists and musicians using their artistic freedoms to violate the rights of others with anti-Semitic themes.

‘A rise in extremism and far-right political leadership’

Sigmount Königsberg, the anti-Semitism commissioner for the Jewish community in Berlin, told JNS that while the current two-week campaign—initiated by Berlin’s interior minister—is scheduled to last two weeks, funds are being raised for more awareness initiatives.

“We look at this effort as a sign of tolerance and diversity in our city, and we are appreciative of the government’s efforts to protect the Jewish community. This campaign is not directed at any one group. This kind of anti-Semitism that some see as harmless; it’s the kind of little things that become very problematic, very quickly. It seeps into every part of society, and it is so often not recognized for what it really is. We need people to identify the problem so they can act on it,” he said.

Rubin said he witnessed the prevalence of that deep and often unrecognized anti-Semitism that permeates German society.

“In discussions in Germany, it’s clear that German culture and society is still coming to terms with the Jewish component of their history. And while the politics have moved forward, and we’ve seen a very strong relationship between Germany and Israel, we still see culturally in Germany many take deep fallback positions when talking about the Jewish community. There were conversations I had with individuals who looked at the Jewish community and the Jewish history there in Germany, and they didn’t understand how the scapegoating of Jews and blaming of Jews for the problems that Germany had in the earlier part of the 20th century led to the Holocaust. And so, now when they’re talking about the scapegoating of immigrants and refugees, they don’t connect those dots and recognize that the cultural history of scapegoating and identifying ‘the other’ as the opponent, the enemy,” said Rubin.

He added, “The debate about whether or not there should be memory culture is generating resentment. There are many Germans who believe that the past is the past, and it’s time to forget about it. And in their moving forward, we’re seeing a rise in extremism and far-right political leadership in German politics.”