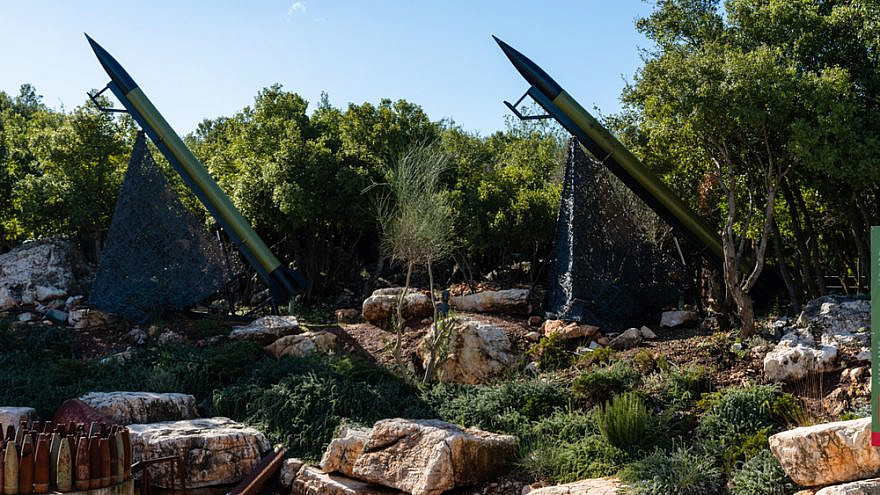 (May 7, 2021 / JNS) Reported Israeli strikes once again lit up Syria’s night sky early on Wednesday, with Israeli missiles slamming into multiple targets in northwest Syria’s Latakia region, according to Syrian state media. The reports are the latest reminder of an ongoing shadow war raging between Israel and the Iranian-Shi’ite axis, in which the Iranians and Hezbollah attempt to smuggle and deploy advanced weapons to threaten Israel with and Israel sets out to disrupt this activity.

An Israeli organization closely monitoring this struggle is the Alma Education and Research Center, which monitors Israel’s northern borders and publishes in-depth studies on the activities of the radical Iranian axis in Lebanon and Syria.

“The reported airstrike in northwest Syria, in our estimation, targeted the precision missile project and related weapons to Hezbollah,” Alma tweeted on Wednesday, in reference to the latest airstrikes.

The precision missile project is the joint Iranian-Hezbollah initiative to upgrade Hezbollah’s projectiles and convert them into precision-guided missiles (PGMs). Unlike unguided rockets, precise missiles with guidance systems can strike targets within an accuracy of a 5-meter diameter.

The Alma Center has recently put together a detailed map of Hezbollah’s deployment of its arsenal while also exposing six new military sites used by Hezbollah in south Lebanon, which provides a glimpse into the scope of the terror army’s firepower, estimated to be larger in scope than that of most NATO armies.

“Hezbollah assesses that in its next conflict with Israel, it will face great difficulties in dealing with the IDF in open area,” Maj. (res.) Tal Beeri, director of the research department at the Alma research center, told JNS.

“It therefore decided to concentrate its activities in built-up areas. Hezbollah always did this, but since the 2006 Second Lebanon War, it shifted most of its activities into and around built-up areas,” explained Beeri, who spent 20 years in Israel Defense Force intelligence specializing in Lebanon and Syria.

Alma’s map shows two primary lines of “defense” created by Hezbollah designed to hamper any future IDF ground maneuver into Lebanon. It is from these zones that Hezbollah plans to direct heavy waves of projectile fire at Israeli population centers.

The first line, which begins at the Israeli border and runs north up to the Litani River, contains a large number of Grad and Fajr rockets with a 75-kilomter range, placing northern Israeli communities in their sights. A third type of rocket, called the Burkan, is deployed in southern Lebanon as well, and while its range is short, its firepower is devastating.

“The Burkan is designed for use against border civilian communities and against the IDF,” said Beeri. “It has a warhead of 400 kilograms. It can destroy a number of buildings on impact.”

The Burkan was “born” in the Syrian civil war, where forces allied to the Bashar Assad regime adopted a Russian doctrine of surrounding a rebel-held area, placing it under siege and shelling it will all manner of weapons. “This includes the Burkan rockets, which created huge destruction. If this falls in a crowded area, it paralyzes the adversary to the point of not being able to function,” said Beeri. Entire villages in Syria were destroyed through this technique, enabling Assad and his allies, including Hezbollah, to seize many areas.

Throughout southern Lebanon, Hezbollah has turned some 200 southern Shi’ite villages into part of its “defensive” plan against a potential IDF ground maneuver. This is where the rocket-launchers have also been embedded. “The fact that they are in villages, as well as near to them, is how they plan to ensure their ability to challenge the IDF in urban warfare, with the limitations it places, such as human shielding,” said Beeri.

The use of underground tunnels, bunkers and command posts dug underground is also intended to make it hard on the IDF to hit the organization. “All of this is in built-up areas,” said Beeri. “This is also where Hezbollah installed its missile infrastructure.”

The first line of defense in Lebanon also contains a massive deployment of anti-tank missiles and shoulder-held anti-aircraft missiles, such as Stingers.

The second line of defense begins at the Litani River and stretches north, to the Zahrani River. In this zone, according to Alma’s assessment, medium-range Zilzal rockets with a range of 200 kilometers are deployed alongside more powerful anti-aircraft batteries.

“Here, too, apparently, are SA-8 surface-to-air missiles with a range of up to 60 kilometers,” said Beeri. 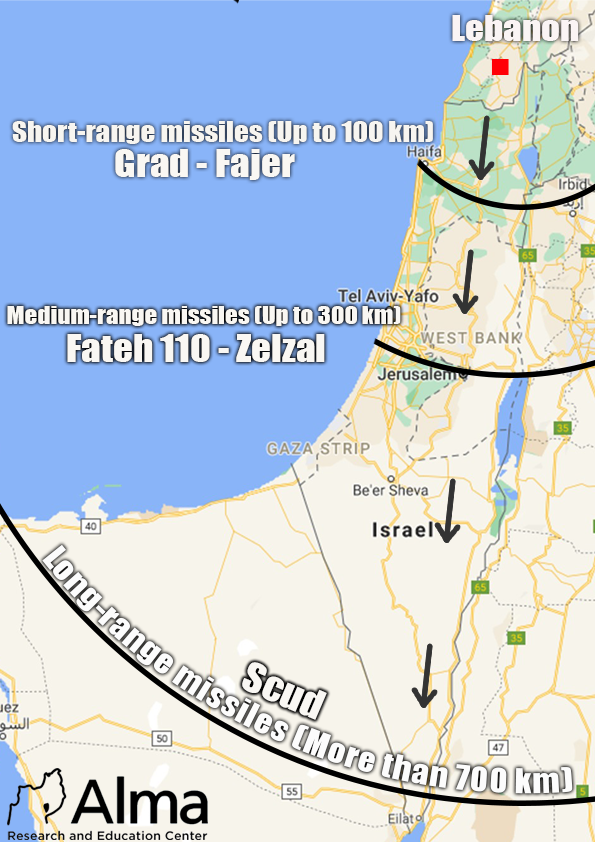 A map showing the potential range of Hezbollah’s missiles into Israel. Credit: Alma.

Further north, in Beirut, is Hezbollah’s central headquarters, and the city area is packed with Iranian and Syrian-made Fateh 110 rockets that can reach greater Tel Aviv. It is here that Hezbollah is trying to turn some of those rockets into precision-guided missiles. (Alma exposed 32 such missile sites in Beirut in previous reports.)

The Beirut-area coastline has advanced anti-ship missiles deployed, including the Chinese-made C-802 missile, which was used by Hezbollah in 2006 to strike an Israeli Navy Ship. “In our view and according to international media reports, Hezbollah views this as a strategic tool,” said Beeri.

Hezbollah is also likely armed with the supersonic Russian-made Yakhont missile in the Beirut area that can be used to target Haifa Port, the Haifa naval base and to challenge the Israel Navy’s freedom of maneuver. “As a bonus, they could try to target an offshore Israeli gas rig with this missile,” said Beeri.

“We believe the Yakhont is in Hezbollah’s possession, and if it is, it probably arrived from Syrian weapons warehouses. The war in Syria opened a big door for Hezbollah to import high-quality weapons from Syrian storage facilities. This is part of the local ‘arrangement’ between Hezbollah and Assad, and some of this is going on with the knowledge of the Russians,” he stated.

The Grad and Zilzal rockets come from production facilities in both Iran and Syria as well, smuggled in by the Iranian Quds Force.

The Bekaa Valley, in Lebanon’s east, serves as a logistical and operational rear for Hezbollah, as well as for hosting weapons factories that apparently also create components for precision-guided missiles.

“Our estimate is that in the Bekaa Valley, Hezbollah likely also has tens of Scud D missiles, which came from Syria,” said Beeri.

Advanced Russian-made air-defense systems—SA-17 and SA-22—are in the Bekaa Valley region as well, he estimated, imported with the help of Syria and Iran.

“We believe that Hezbollah trained in Syria on these missile batteries, then came back to Lebanon with them and brought an unknown quantity of them back,” said Beeri.

The majority of Hezbollah’s arsenal is short-range weaponry, but the ongoing attempt to turn Fateh-110s into guided missiles is a severe threat since it gives Hezbollah the ability to accurately target Israel’s strategic sites.

A guided Fateh-110 missile can launch at any target in greater Tel Aviv, he noted, and although Israel’s multi-layered air-defense systems will stop many incoming threats, they won’t be able to intercept everything.

Said Beeri: “What more do they need than the ability to hit central Israel?”