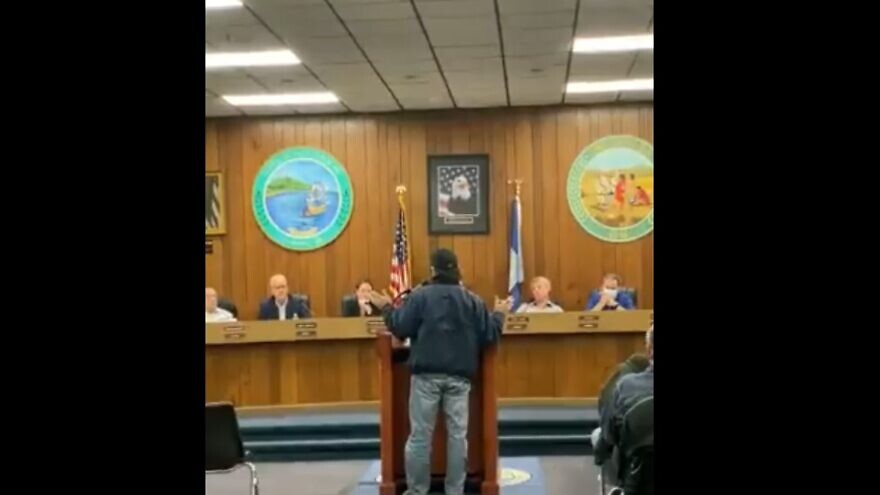 (November 16, 2021 / JNS) A resident of Rockland County, N.Y., may face criminal charges after making anti-Semitic remarks and appearing to threaten Jewish residents last week during a village board meeting.

During the Nov. 10 meeting of the Town of Haverstraw, Nick Colella spoke out against plans by a local congregation, B’nei Torah of Mount Ivy, to convert an existing home into a synagogue, construct a two-story addition and add off-street parking.

He first complained that Jews don’t put away their garbage cans for days and weeks because they “are too lazy to take it in because their maid didn’t pick it up, right?”

As town officials urged him to not waste his allotted time to address them, he continued talking. “Even though there are sidewalks, certain sects of people then walk in the street, and no one is wearing any reflective gear. So if I run one of them over, and, of course, I’m going to back over them again, right?”

Audience members gasped as town officials tried to cut him off. By the following day, Colella’s comments had gone viral with both Jewish and local civic leaders weighing in.

SICKENING! Bigot at a public hearing in Haverstraw (Rockland County), NY says regarding Jews, “There is a certain sect of people that tend to walk in the street and nobody is wearing any reflective gear. So, if I run one of them over, and of course I will back over them again pic.twitter.com/l5L1tNAkCq

“It doesn’t happen in a vacuum that a person is shameless enough to go on a three-minute inflammatory public rant about Jews and for most people in attendance to take his side, too,” said the Orthodox Jewish Public Affairs Council in a statement. “It’s the result of a toxic environment where agitators spent years weaponizing debates about municipal policy with an outsized focus on Orthodox Jews, and the commentary loaded with one-sided reporting and flat-out lies. Often, the conversation is framed that every local problem is the fault of Orthodox Jews.”

The local district attorney is investigating and considering possible charges against Colella.

“We are working with the Haverstraw Police Department and will be contacting the New York State Attorney General’s office to make a determination as to if any potential charges may be filed stemming from these hateful statements,” said Rockland County District Attorney Tom Walsh late last week in a statement. “Let me be very clear: Anti-Semitism or any sort of racism has no place in Rockland. As a retired judge in the Village of Haverstraw, I know how diverse and welcoming the community is.”

New York Gov. Kathy Hochul asked both the New York State Police Hate Crimes Task Force and New York’s human-rights divisions to aid local officials, saying, “hateful, anti-Semitic speech will not be tolerated. We will do everything we can to protect our communities from this abuse.”

The Town of Haverstraw is just a few miles from Monsey, which has a heavily Orthodox and Chassidic Jewish population. In recent years, members of the Orthodox community have begun moving to neighboring towns and villages; it has created some tensions as they seek zoning changes to allow for synagogues to be built in residential areas.

Shragi Greenbaum, director of the Rockland Regional Office of Agudath Israel of America, praised the public figures for their condemnation of the remarks but said “what remains of concern, though, is how many Rockland County residents harbor similar feelings to those of the speaker at the planning board but aren’t foolish enough to proclaim them publicly.”

He continued, stressing that “it’s important for neighbors—Jewish and non-Jewish—to introduce themselves to one another and to better get to know the needs and sensitivities of those outside their social circles.”