(March 16, 2022 / JNS) The Palestinian Authority has narrowly avoided a doctors’ strike, after failing to implement promises it made to improve their pay.

Explaining why it could not fulfill its promises, the P.A. Health Ministry blamed the “stoppage of external aid” and Israel’s anti-“pay for slay” law*. The ministry referred the law, which was designed to combat the P.A.’s payments to terrorists, as the “theft of tax money … as a result of the national position that adheres to principles.”

In an article that appeared in the official P.A. daily Al-Hayat Al-Jadida on March 4, the ministry “called on the Doctors’ Union not to implement the measures of escalation that were announced in a statement it issued on Feb. 25 [2022], and not to turn to a strike in the [P.A.] governmental health sector at this difficult and sensitive time… .”

The P.A. government and the ministry, the article continued, “are in a difficult situation in light of the lack of financial resources, the stoppage of external aid, and the theft of tax money by the occupation and it taking a large part of our money as a result of the national position that adheres to the principles [emphasis added]. The ministry also noted that the political pressures that the Israeli occupation authorities are exerting on the leadership have caused a suffocating financial crisis that still exists.”

Indeed, since Palestinian Media Watch exposed the P.A.’s payments to terrorists, foreign aid to the PA has dropped by 90 percent. A substantial part of the foreign aid was lost when the United States passed the Taylor Force Act, which conditions the bulk of U.S. aid to the P.A. on its abolition of its payments to terrorists. At the same time, Israel’s anti-“pay-for-slay” law is also having an increased effect.

However, despite the mounting pressure, the P.A. stubbornly clings to “the national position that adheres to principles” and insists on continuing to reward terrorists.

The P.A. pays every Palestinian terrorist arrested by Israel a monthly salary. The starting terrorist “salary” of 1,400 shekels ($450) rises automatically with time spent in prison, reaching a huge 12,000 shekels ($3,859). The following chart, based on the P.A.’s 2004 Law of Prisoners and Released Prisoners and its implementing regulations, shows the terrorist prisoners “pay scale”: 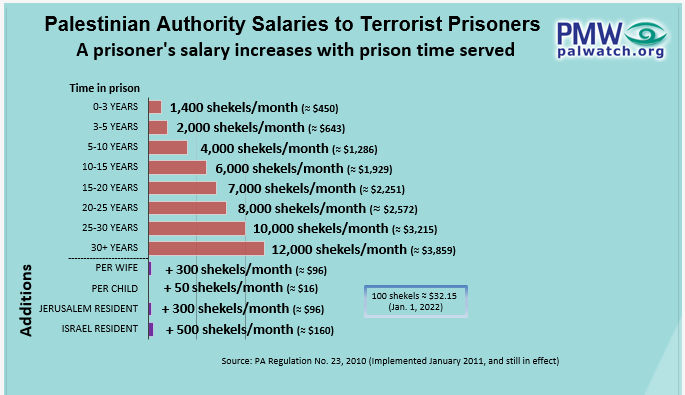 Comparing the salary of a doctor, after seven years of study—$1,686—to that of a terrorist who has already spent seven years in prison—$1,286—and also taking into account that the terrorist has no expenses whatsoever, it’s clear which “profession” the P.A. prioritizes. That becomes even clearer when 20 years of “professional experience” is taken into account. While the P.A. pays a specialist doctor with 20 years’ experience (after seven years of study) a measly $2,678 a month, it pays terrorists who have spent 27 years in prison 10,000 shekels ($3,215) per month.

Moreover, according to financial reports published by the P.A., in the entire year of 2021, the P.A. payroll for the entire Health Ministry (ministry employees, doctors, nurses, etc.) was 892,607,850 shekels ($273.6 million). While the P.A. is doing its utmost to hide its terror payments, PMW estimates that in 2021 the P.A. spent 840 million shekels ($256 million) on financial rewards to imprisoned terrorists, released terrorists, wounded terrorists and the families of dead terrorists.

In other words, if the P.A. would only stop paying hundreds of millions of dollars a year to terrorists, it could nearly double its health budget at a stroke. In addition, the international community could restore its aid to the P.A., and punitive Israeli sanctions would be canceled.

It’s all a question of priorities.

*Israel’s anti-“pay for slay” law instructs the state to deduct and freeze from the tax revenue it collects for the P.A. an amount equivalent to that which the P.A. disburses in salaries to imprisoned terrorists and families of “martyrs.” Should the P.A. stop these payments for a full year, the Israeli government would have the option of giving all or part of the frozen money to the P.A.

The law was enacted by the Knesset on July 2, 2018. During the Knesset vote, the law’s sponsor, Avi Dichter, said: “The Foreign Affairs and Defense Committee received much help in its deliberations … from Palestinian Media Watch, who provided us with authentic data that enabled productive and professional deliberations, nuances that are very difficult to achieve without precise data.”