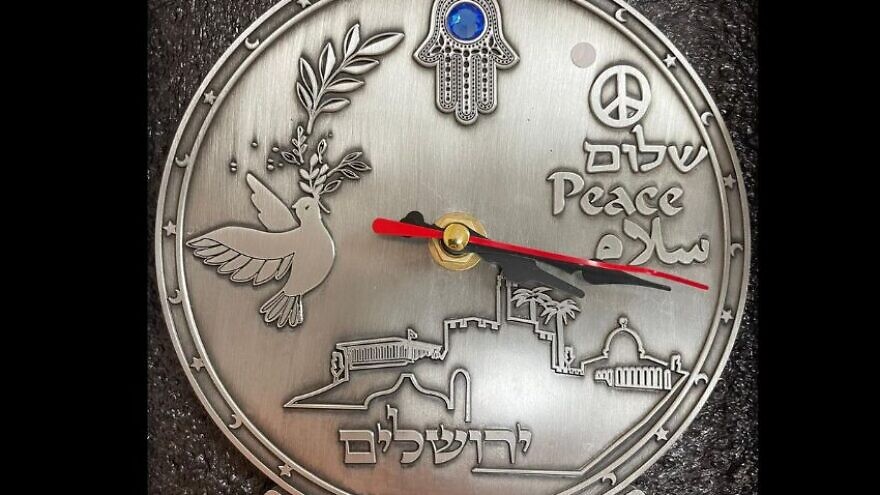 (May 2, 2022 / JNS) Dozens of Israeli families who lost loved ones to war and terror have expressed anger at this year’s gift from the country’s Defense Ministry ahead of Memorial Day—a “peace clock”— due to what they claim is its lack of Jewish content. They have announced their intention to return it.

Each year, on Israel’s “Memorial Day for Israel’s Fallen Soldiers and Victims of Hostile Acts,” the Defense Ministry’s Department of Families and Commemoration, the authority responsible for memorializing Israel’s fallen servicemen and women, sends a gift to bereaved families.

Some families are outraged at this year’s gift, a wall clock that they feel downplays the Jewish identity of the state. While the word “Jerusalem” appears in Hebrew, an accompanying outline of the city does not include the Western Wall, although it does include the Dome of the Rock. Small five-pointed Christian stars and Muslim crescents surround the clock’s face, but no Stars of David.

“You chose an ‘artistic’ object that has almost no Jewish and national symbol in it,” said Sarah Klein, widow of Roi Klein, an Israeli major killed during the Second Lebanon War in 2006 after jumping on a grenade to save his fellow soldiers.

“The watch does not have a Star of David, a seven-branched [menorah], an Israeli flag or an IDF emblem. In contrast, appearing on the clock is the Dome of the Rock mosque and the … church on the Mount of Olives. Also, the Islamist crescent appears 13 times along with the Christian symbol the five-pointed star,” she said, according to Channel 12.

Ilan Moreno, the father of Lt. Col. Emanuel Moreno, killed on the last day of the 2006 Lebanon War, whose picture remains classified to this day, told Channel 12, “I do not understand. No one noticed? Whoever bought it is just stupid. … It is a gift for bereaved families, a gift on which most of the motifs are Muslim.”

He added: “I have nothing by the way against the Muslims, I have a lot of things reminiscent of mosques, etc., hanging on my walls, but a gift for bereaved families? It sounds completely crazy.”

In response to the anger, the Defense Ministry replied that it was bereaved families themselves, members of the Public Council for the Commemoration of the Soldier, a public body that partners with the ministry to determine the best ways to commemorate the fallen, that chose this year’s gift.

“The souvenir selection process is carried out with sensitivity, with reference to and in harmony with the bereaved families,” the ministry said.

“This year, the 74th year of the State of Israel, representatives of the bereaved families chose the ‘peace clock’ keepsake, a symbol of the state’s desire for peace and brotherhood with our neighbors—in Hebrew, English and Arabic.

“On the memento is imprinted a landscape of the city of Jerusalem—sacred to the three religions, a dove with an olive leaf—a clear sign of peace in the history of the Jewish people, and a hamsa for protection,” it said.