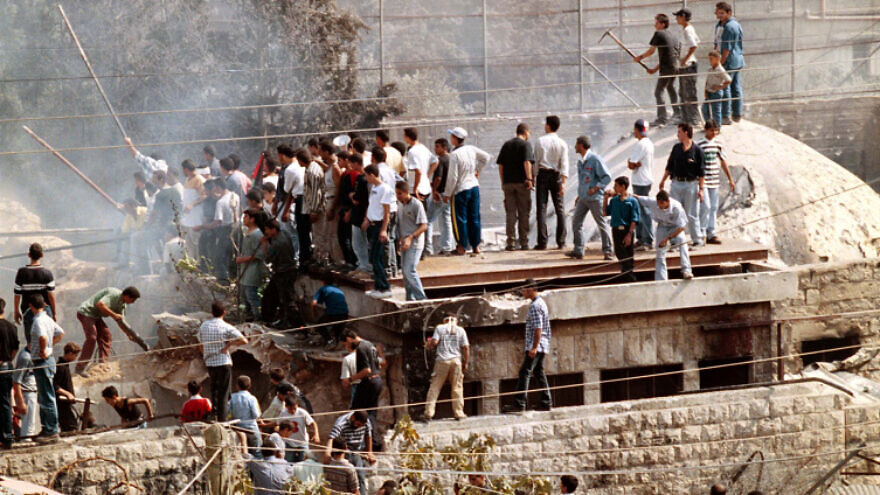 Palestinians take over Joseph's Tomb in Nablus in 2000. It was under Israeli control until the tomb was attacked by a Palestinian mob. Photo by Flash90.
Republish this article
1237 WORDS
Spread the word.
Help JNS grow!
Share now:

(December 25, 2022 / JNS) Since the current wave of Arab terrorism began in March, worshippers and the IDF soldiers guarding them have come under gunfire during the monthly organized pilgrimages to the Jewish holy site of Joseph’s Tomb in the city of Shechem, aka Nablus, in Samaria.

The attacks have taken during every visit to the site, indicating they are likely organized in advance. The most recent violence took place on Thursday night.

A statement released by the military on Friday morning read: “IDF soldiers operated to secure the coordinated entrance of Israeli civilians to Joseph’s Tomb in the city of Nablus. During the activity, armed Palestinians hurled explosive devices and fired towards the soldiers, endangering their lives. The soldiers responded with live fire. Hits were identified. No IDF injuries were reported.”

Joseph’s Tomb is in Area A of Judea and Samaria, commonly known as the West Bank, and under full Palestinian Authority control under the Oslo Accords. But it is one of two Jewish holy sites specified in the agreements between Israel and the PLO to which the PLO promised to provide secure access for Jewish worship. The other is the Shalom Al Israel Synagogue in Jericho.

Nevertheless, these days Jewish groups have extremely limited opportunities to visit the site and must travel on bulletproof buses with a full IDF escort and in the middle of the night.

An IDF official who has overseen numerous visits to Joseph’s Tomb explained to JNS: “As part of an international agreement [Oslo], the P.A. is responsible for keeping visits by Jewish worshippers safe, which it fails to do. I don’t remember another time when there was this much shooting. There are clashes with terrorists each and every time.”

When asked why there are so many attacks at this time, the official said, “Throughout Judea and Samaria, the number of weapons in the hands of terrorists is on the rise. They have a crazy number of weapons. Each time we [the IDF] enters an area the P.A. has lost control of we are shot at. Once there were rocks and firebombs; now it’s gunfire.”

The official explained that the monthly visits to the Tomb of Joseph, son of the patriarch Jacob, which usually take place surrounding Rosh Chodesh, the first day of the Hebrew month, “are organized between the civilian worshippers and the IDF who coordinate the visits with the P.A., because the P.A. guards the tomb 24/7.”

He continued, “We let the P.A. know we are coming because that is part of the agreement and we respect agreements. In fact, the P.A. is responsible for protecting the worshippers, but since it fails to do so, we have to go in.”

The official stressed he did not have proof that P.A. officials were alerting the terrorists about upcoming visits, but added that since the trips are advertised on social media it wasn’t hard for them to know when the worshippers were due.

Several planned visits have been canceled since March following situational assessments by the IDF that it was too dangerous, the official said.

When asked whether the visits were worth the risk, he responded, “It’s not my place to say whether the trips should or shouldn’t happen. It’s our legal right to enter a place that is holy to the Jewish people, and it is my job to protect them. I expect the Palestinians to respect the agreements as we do.”

Lt. Col. (res.) Maurice Hirsch, head of Legal Strategies for Palestinian Media Watch, who served for 20 years in the IDF Military Advocate General Corps, told JNS, “In appendix 4 of Annex I of the Israeli-Palestinian Interim Agreement on the West Bank and the Gaza Strip [i.e., the 1995 Oslo II agreement], Palestinian terrorist Yasser Arafat stipulated that Joseph’s Tomb is a solely Jewish site and guaranteed free access.”

Hirsch added, “The fact that gunmen are launching premeditated attacks on Jewish worshippers and soldiers strongly suggests that there is considerable collaboration between the P.A. security forces, many of whom actively participate in terror and have been glorified [for that] by the P.A. itself, as P.A. security forces members by day and ‘self-sacrificing fighters’ by night, and the terrorists. The terrorists clearly seem to know in advance exactly when the Jews are entering Joseph’s Tomb, information that the IDF no doubt provides to the P.A. security forces.”

Davidi Ben Zion, deputy head of the Samaria Regional Council for the past eight years, is the civilian coordinator of the visits, working with the IDF.

He told JNS that in addition to the monthly Rosh Chodesh pilgrimages, there are special trips during Jewish holidays, bringing the total number of coordinated visits each year to 16.

“The situation this year is much worse than last year, which has led to a decrease in worshipper participation,” he added. “That being said, over the past several months it has gotten a little better as the IDF has carried out successful operations targeting the Shechem-based Lions’ Den terrorist group.”

Ben Zion said visitors will not be deterred from visiting the site. “We will never give up on Joseph’s Tomb. On the contrary, we hope to once again establish a permanent presence there. If we don’t connect to our roots, there is no hope for the future.”

From 1982 to 2000 there was a continuous Israeli presence at the tomb, which housed the Od Yosef Chai Yeshiva. However, Israel pulled out of the area following a deadly terrorist there in October 2000, towards the start of the Second Intifada.

Israelis started visiting again in 2004, albeit on a limited basis, following the success of the IDF’s “Operation Defensive Shield” counterterrorism campaign.

Elliott Cahan, director of development North America for the Elon Moreh Hesder Yeshiva, which overlooks Shechem, has taken groups of his students along with tourists from abroad to Joseph’s Tomb many times over the years. He told JNS that he’s been there several times since March, and doesn’t remember the situation being as bad as this year.

In June, he narrowly missed being present during a shooting attack at the tomb in which several Israelis including soldiers were wounded.

“Our yeshiva goes a lot. We feel a close connection to [the biblical] Joseph not only because of where we are physically situated but because of his philosophy. He was someone who took his dreams and made them a reality. We learn leadership and governance from him, and more,” Cahan said

Over the years there were sporadic disturbances from the nearby village of Balata, “but recently it seems the terrorists are much more emboldened, and there is a lack of deterrence,” he said. “The goal of the terrorists is to try and prevent people who have every right to pray at the holy site from doing so. But I’m seeing that the exact opposite is happening.”

Cahan explained, “I recently brought a tourist from Brooklyn with me on a trip to the tomb who said visiting there was on his bucket list. But after the experience, he said that he wants to come back every time he is in Israel.

“It’s amazing to see how people from Israel, or visitors from all over the world, gain strength even as the terrorists are trying to deter us. Our resolve to visit Joseph’s Tomb and our other holy sites continues to grow. This shows the terrorists that they are not going to win,” he said.