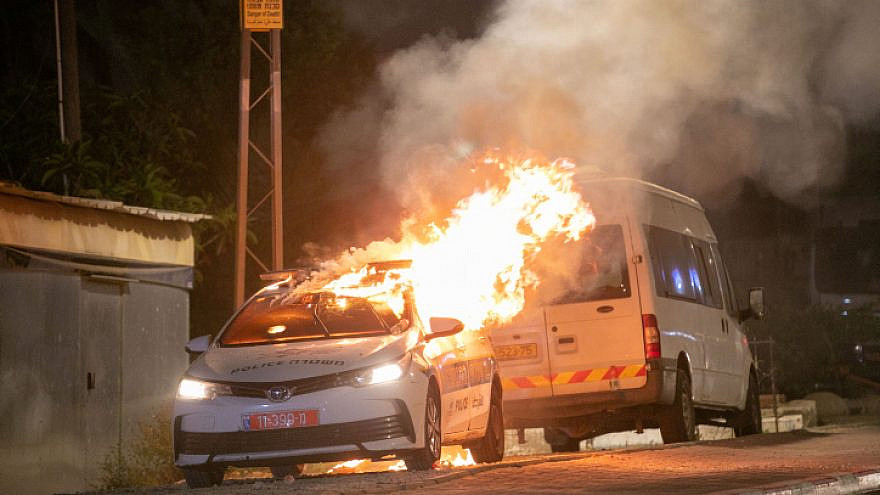 An Israel Police patrol car burns in Lod, where synagogues and cars were torched amid riots by the city's Arab residents, May 12, 2021. Photo by Yossi Aloni/Flash90.
Spread the word.
Help JNS grow!
Share now:

The personnel will be activated by police instead of going to their reserve IDF units during emergencies, according to the plan. The Israel Police’s Operations Branch is preparing the organization to receive the extra personnel, but “the maneuver is currently stuck vis-à-vis the Defense Ministry,” said the report.

Police Commissioner Insp. Gen. Yaakov Shabtai understood the need for a reserves force during “Operation Guardian of the Walls” in May 2021, the report said, when police personnel shortages became painfully clear as it struggled to send sufficient forces to multiple disturbance areas across Arab-Israeli areas.

By being recruited into the police, the combat soldiers will be able to deal with disturbances in Israel, which ordinary police volunteers are forbidden to do.

On April 3, the Israeli government authorized the allocation of 181 million shekels ($56.5 million) in emergency funding to the Israel Police.

According to a statement, the budget supplement was authorized “in light of the significant challenges that Israel’s police force currently faces and given the operational gaps that have accumulated in recent years.”

The extra funding will help establish a new Border Police Brigade based on reserve forces, along with other personnel and equipment expenses.